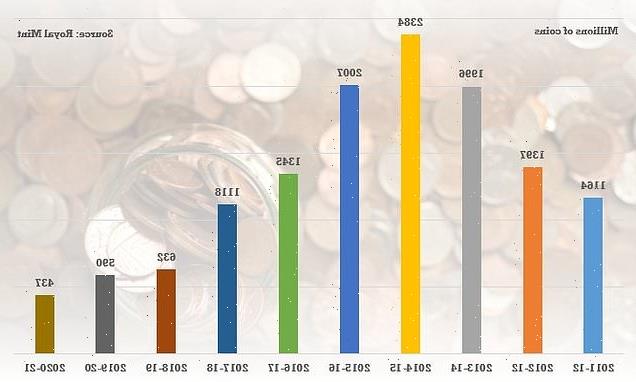 The Royal Mint issued what is believed to be its lowest ever number of coins last year – with no £1s sent out for use.

Just 437million UK coins were put into circulation in 2020-21 as the pandemic hammered cash use, with people shopping online and switching to contactless payment.

The figure was down from 588million the previous year – and compares to a high of 2.4billion as recently as 2014-15. The issuance of £1 coins was so low it did not register in the statistics.

The extraordinary slump underlines the dramatic shift in consumer habits, and will raise more concerns about vulnerable people getting left behind in the dash to a cashless society.

The Royal Mint’s annual report published this week said coronavirus had ‘accelerated trends around declining cash use’, and pointed out it had acted to shore up businesses starved of small change – especially 1ps and 2ps – as the public kept it in drawers.

Work was also ‘reordered’ in its factory to avoid ‘downtime’ and ‘protect employment in light of reduced demand’. 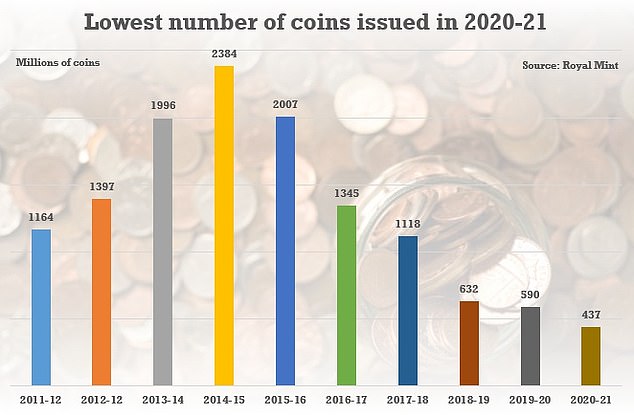 ‘As UK cash use declined and coin circulation reduced in 2020-21, we worked with UK banks and HM Treasury to quickly respond and ensure that retailers had access to coinage,’ the report said.

‘We implemented stringent safety measures on site to ensure we could continue to operate safely, and keep the UK and our international customers stocked.’

The Mint recently validated circulation figures going back to 2010, and this year’s circulation is thought to be the lowest on record.

A National Audit Office report last September revealed that the Mint is proposing to stop striking 2p and £2 coins for a decade after huge amounts of old change was handed back in.

As of March last year, the Royal Mint was sitting on 26 times as many £2 coins as it needed to, six times as many 1p coins and eight times as many 2p pieces, with all its excess coins worth around £89million.

Figures provided to the spending watchdog found the number of coins produced each year by the South Wales-based body fell by nearly two-thirds between 2011 and 2020.

A Royal Mint spokeswoman said: ‘During 2020/21 we issued nearly half a billion coins into circulation, this was based on demand from UK Banks and Post Offices.’ 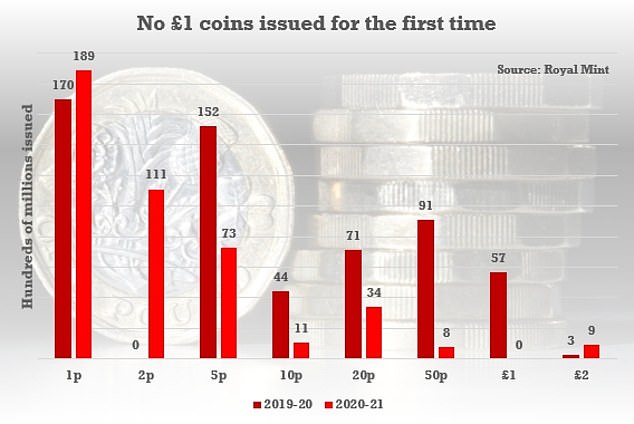