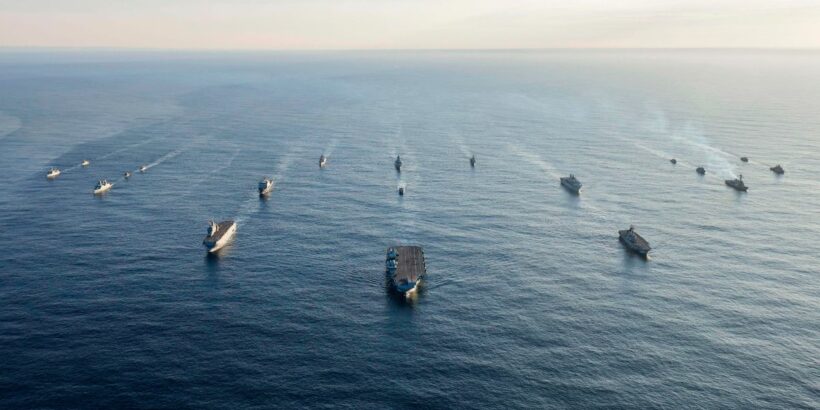 A Royal Navy carrier has led a 25-strong armada of warships in a show of force that marks the biggest NATO Arctic military exercise in 30 years.

The 25 warships, led by the Royal Navy vessel, was set up to provide and exercise a show of force with thousands of personnel involved.

Six Royal Navy ships and 2,000 British personnel joined vessels and troops from 26 other countries in a drill named Cold Response.

The Cold Response exercise saw the 25-strong ensemble begin in Norway amid mounting tensions between Russia and the West over the invasion of Ukraine and the sanctions that came in response.

HMS Prince of Wales, which is currently serving as a NATO command ship, joined up with the exercise and sailed north to the Arctic to participate.

Cold Response will feature a total of 30,000 troops, 200 aircraft and 50 vessels, with RFA Mounts Bay and HMS Albion leading the UK's amphibious input to Cold Response.

The HMS Prince of Wales joined up with the Cold Response task force soon after air-defence exercises in the North Sea, which were conducted alongside some of the UK's F-35B Lightning jets from 617 squadron, the Dambusters, The Sun reported.

The drill, which takes place every other year, will involve more than twice as many personnel as the 14,000 that were planned for the previous exercise in 2020.

Cold Response's latest outing comes amid fears from the West that Vladimir Putin will use the invasion of Ukraine as an excuse to expand into the Arctic.

Defence Secretary Ben Wallace said: "The Arctic is becoming an area of increasing military competition and the security of the region is directly linked to our national security.