It’s the wedding that binds the 21st century’s two most powerful families: Windsor and Hollywood.

A significant fraction of the world’s population will watch Diana’s red-headed warrior Harry get hitched to Meghan, the super-hot, super-woke Suits actress from south-central LA, in an ancient castle on a hill amid England’s green and pleasant fields.

Forget the World Cup – is the May 19 wedding the cultural event of the year? The decade (sorry, Wills and Kate)? The century? 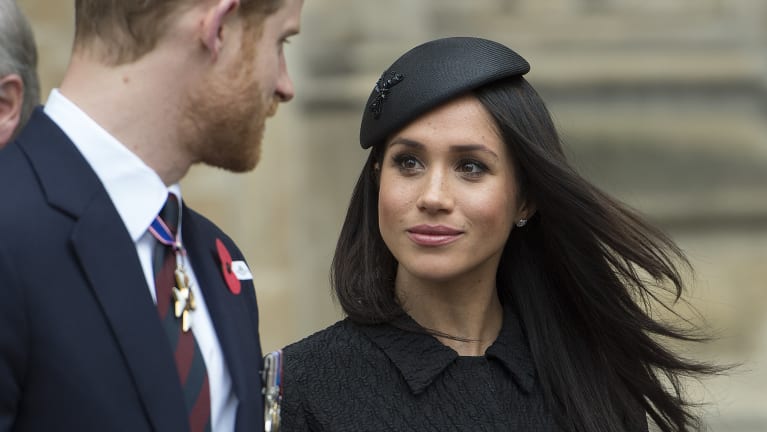 Prince Harry and Meghan Markle are due to marry this month.

Right now it’s easy to hype the British royal family. They’re having a moment, partly thanks to a wave of classy, popular and expensive British and American TV series and movies: with The Crown the jewel in the, uh, crown.

The Queen is 92 and her grandchildren are leaving behind youthful pursuits and taking up the work of The Firm. This wedding is the end of the beginning of their story, the season one finale, and you couldn’t script a better setting in William the Conqueror’s castle, built to defend London and all it stood for.

But please, please, try to manage your expectations, warns experienced Robert Jobson, royal editor at London's Evening Standard and an old hand at pomp and pageantry.

This isn’t Game of Thrones. It’s a wedding at a family home.

“Pomp and pageantry is inevitable, it’s a big part of the wedding,” Jobson says. “But honestly it is not really going to be a spectacle in the way that you would see [if it was] in London.

“It’s going to be quite controlled. Harry is lower down the pecking order so he doesn’t have to go the full monty.”

Some parts of the media (I’m looking at you, Vogue) have dubbed this the "People’s Wedding", harking back to Tony Blair’s resonant response to news of Harry’s mother’s death: “She was the people’s princess and that is how she will stay”.

They were picking up on Harry and Markle’s decision to invite members of the public, including community and charity workers, into the grounds of Windsor Castle on the day – though not inside the chapel.

Arthur Edwards, who has been photographing the royals for more than 40 years for The Sun and had a close bond to Princess Diana, says she “broke the mould” on how royals could show their humanity and empathy, and “William and Harry are just like her”.

But "People’s Wedding" is a misnomer: “Hardly any ‘people’ will be involved in it”, Jobson says – compared to big royal weddings of the past such as Charles and Diana, William and Kate, even Andrew and Sarah Ferguson, who all married in London’s Westminster Abbey, paraded through huge London crowds and who followed the tradition of kissing on the Buckingham Palace balcony to the roar of well-wishers.

It’s perhaps unfair to compare this with the weddings of future kings, but even the 1986 wedding of Andrew and Fergie was a much fancier and more public affair than Harry’s will be. Prince Andrew was at the time only fourth in line to the throne (Prince William, then 4, was a page boy at the wedding, and Harry was then almost 2). Harry has recently been knocked down to sixth with the birth of Prince Louis.

“The Prime Minister’s not even invited so it’s not going to be quite at the same level,” Jobson says. “It’s more personal, they don’t have to give quite as much of themselves to the public, to the media in particular. They just don’t have to.”

And the venue makes a huge difference. “There will be thousands in the streets but there will be a big, thick, thousand-year-old Windsor Castle wall between them and what’s actually happening.” 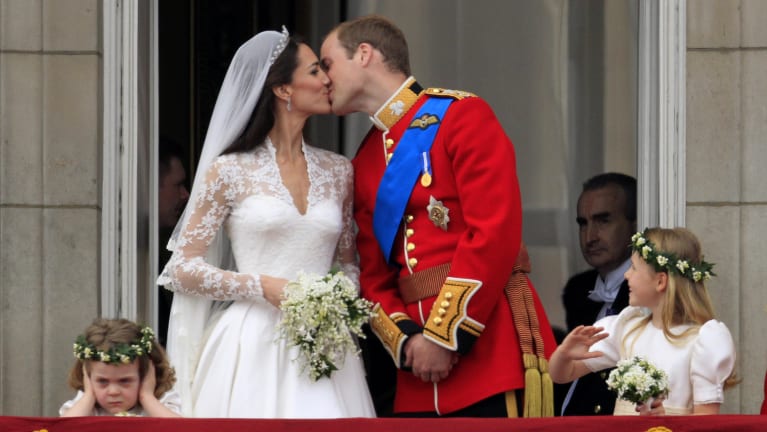 Prince William and Kate, Duchess of Cambridge kiss on the balcony of Buckingham Palace after their wedding in 2011.

A few thousand people have been invited inside to the castle lawn, but “it is not like say William and Kate’s or Charles and Diana’s. There’s a carriage ride on the streets but that’s the only nod there is to the public," he says.

“I still think it’ll be a huge spectacle, as far as you’ll see in Australia it will look like many other royal weddings, it’s a very televisual experience – but a people’s wedding, far from it, it’s more of a private royal wedding.” 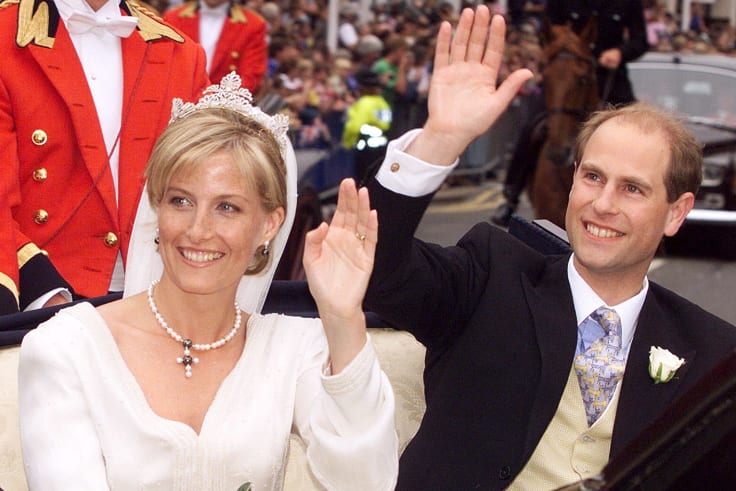 In fact it looks like a “carbon copy” of the wedding of Prince Edward, Earl of Wessex (the Queen’s youngest child) and Sophie Rhys-Jones in June 1999, Robson says: same venue, same request for no politicians on the guest list, same open horse-drawn carriage procession after the ceremony.

Part of this, perhaps, is due to Harry’s fraught relationship with the media and the public eye, dating right back to the death of his mother in a paparazzi pursuit when he was 12 – and his traumatic public parade behind her coffin through the streets of London.

Edwards says he would never forget how he “saw Harry’s face crease up” when he was looking at the flowers left for his mother by the public after her death. “I couldn’t bear to see the pain he was in.”

Though Harry has “become more adult and much more statesmanlike” he has not warmed to media attention, Edwards says. “He doesn’t say ‘good morning’ to us … he’s upset with us generally”.

The relationship with the media hasn’t been helped by some tabloid roughing up of Markle, with her dysfunctional family dissected, and some crude analysis of her racial background and divorce.

Edwards has photographed many royal weddings – he says the key is to secure a good spot – and he’s surprised by the limits to media access to this one. He thinks that’s a “clear message” from the couple.

Thank God, then, for TV cameras, because the Americans must be satisfied. This is their "American princess".

“I think it’s fair to say that the American people are quite fond of the royal family,” then US president Barack Obama told Prince Charles in 2015. “They like them much better than they like their own politicians.”

Even before Markle’s engagement to Harry, America was sweating through a severe bout of Anglophilia – The New York Times noted that people are even starting to say “cheers” to each other. Downton Abbey and The Great British Bake Off are big, but the biggest obsession is with the royals. 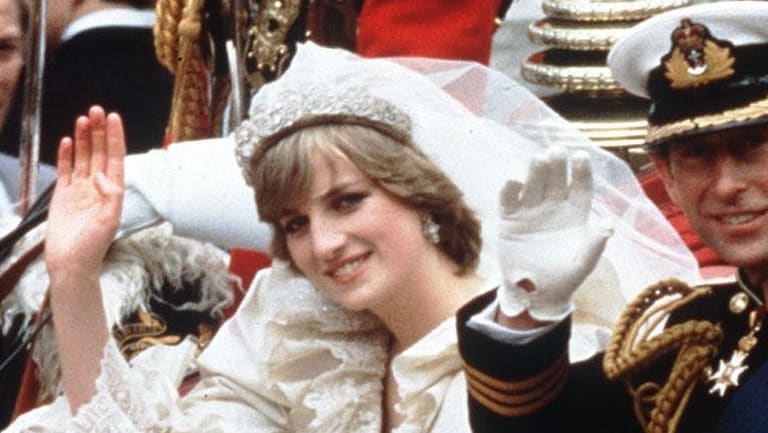 Sandro Monetti, a British journalist in Los Angeles, told CNN that Americans love the royal family more than British people do. "To much of the world, Britain is the royal family," he said.

Matt Smith, who played Prince Philip on Netflix hit The Crown, has said he was surprised by the fascination that royals inspired in the US. He put it down to an “air of mystery and celebrity” which had allowed them to endure.

It’s not an entirely new phenomenon. Nearly 23 million Americans watched William and Kate get hitched in 2011, and 33 million watched Princess Diana’s funeral. But the fascination seems to have hit new heights, spurred by Markle and The Crown.

There has been a spate of specials on US TV, from Fox’s Meghan Markle: An American Princess to PBS’ five-part nightly Royal Wedding Watch next week.

American hotels and restaurants are holding wedding-themed events. In New York, Myers of Keswick, a traditional British grocery store, has been fielding orders for royal-wedding-themed parties.

“There’s a lot of interest in this wedding because Meghan is American,” Irene Donnelly, who works at the shop, told AM New York. “People are looking for finger foods like cocktail sausages, cheese and onion potato pastry.”

Melissa Turoff, a political and cultural historian from New York University, says Americans view the UK royal family as a cultural product, much like those sausages. “We don’t have an aristocracy or royal history at all, so this is pure cultural consumption”.

Markle appealed to young women, especially New Yorkers, as a strong female role model with a multicultural background, Turoff told AM New York. “Harry’s being taken off the scene by someone who is admired and respected.”

Psychiatrist Dr Sudeepta Varma told Huffington Post that Americans who grew up on Disney fairy tales were programmed to fantasise about princes and princesses. And Markle’s story is the dream become real: an American woman from an unremarkable family swept off her feet by a prince to a wedding in a castle.

But there’s also an escapist element: amid a stressful news cycle, royalty is a welcome distraction and a link to a romanticised past.

People who closely follow the ups and downs of the royals – or any other celebrity – feel like they’re in a kind of relationship with them, that they share, albeit in a small way, a part of their lives and accomplishments.

And now they get that soap opera staple, a wedding.

While some are painting this as a new era for the royals, in many ways it’s the establishment showing that it can absorb change without being changed.

Meghan, a self-described feminist, is giving up her career, has erased much of her online persona and even adopted the religion of her new husband. While much is being made of her bi-racial background – and how she might push for more diversity among palace staff – the English royal family are almost traditionally foreign (the house of Windsor is really Saxe-Coburg and Gotha).

This isn’t Hollywood conquering the castle. It’s a fine piece of casting (and, of course, a genuine love match) that nicely sets everything up for the next series of one of England’s longest-running shows.