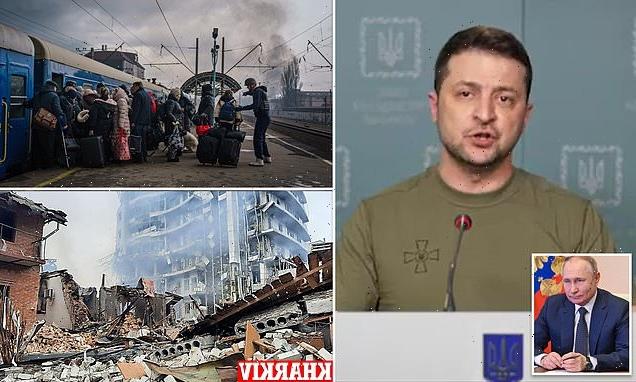 ‘All these people will die because of you’: Zelensky slams NATO’s refusal to establish a no-fly zone over Ukraine and says that it gives Russia the ‘green light’ to carry out more attacks as Kremlin declares limited ceasefire in Mariupol

NATO leaders are abandoning Ukrainians to be killed by Russia, the country’s president said on Friday – shortly after a meeting at which a NATO no-fly zone was once again rejected, as in Moscow the ministry of defense declared a ceasefire from 10am Saturday to allow residents to flee two encircled cities.

‘Russian forces will stop firing at 10:00 Moscow time to allow humanitarian corridors out of the Ukrainian cities of Mariupol and Volnovakha,’ the defense ministry said in a statement.

Volnovakha is 470 miles southeast of Kyiv, and 40 miles north of the port city of Mariupol.

Ukraine is yet to respond to the Russian gesture.

Analysts pointed out that Russia has in the past used a similar tactic, urging civilians to flee and then accusing anyone who remains of being a combatant.

The news came after NATO foreign ministers held an extraordinary meeting in Brussels to address the escalating crisis in Ukraine, which concluded with representatives of the 30 countries agreeing that a no-fly zone above Ukraine was not an option.

They believe that putting NATO planes above Ukraine, to shoot down any Russian jets that enter Ukrainian airspace, would dramatically escalate the conflict and drag in ground troops from the U.S. and other countries.

NATO Secretary-General Jens Stoltenberg said the topic of a no-fly zone was ‘mentioned’ at Friday’s summit, but that the allies once again agreed there should not be NATO aircraft operating over Ukraine’s territory.

Yet a new Reuters/IPSOS poll on Friday showed three quarters of Americans surveyed wanted a no-fly zone above Ukraine.

And Ukraine’s president, Volodymyr Zelensky, told NATO leaders they were now responsible for the deaths of innocent civilians.

‘All the people who will die starting from this day will also die because of you,’ said Zelensky in a video message.

He called the ‘narrative’ that a no-fly zone would provoke Russia’s direct aggression ‘self-hypnosis of those who are weak, under-confident inside.’

He concluded, however, by thanking the world for their support, praising the ‘many countries’ who ‘help our state no matter what, from the first day of the invasion.’

Support for the Ukrainian government was solidifying in the United States.

The Reuters/IPSOS survey, conducted online and in English throughout the United States on Thursday and Friday, with 831 adults responding, ups the pressure on President Joe Biden to take more aggressive actions against Moscow – although he has dismissed the notion of no-fly zones because of the risk of open conflict between NATO and Russian forces.

It was not clear if respondents who supported a no-fly zone were fully aware of the risk of conflict, and majorities opposed the idea of sending American troops to Ukraine or conducting air strikes to support the Ukrainian army.

On Friday, the United States flew B-52 Stratofortress bombers over NATO’s eastern flank above Romania, exercising with the German and Romanian militaries.

The largest strategic bombers in the U.S. Air Force took off from RAF Fairford, a Royal Air Force station in England, and conducted ‘close air support and integration mission training,’ according to a statement from U.S. Air Forces in Europe.

The B-52s then flew to Romania, where they conducted more close air support training as part of the Bomber Task Force (BTF) missions.

‘BTF rotations give us a critical opportunity to integrate and train with our allies and partners, especially during this difficult time,’ said Gen. Jeff Harrigian, commander of United States Air Forces in Europe, Air Forces Africa and NATO’s Allied Air Command.

‘Training together ensures the defensive power of NATO remains unmatched,’ he said.

Some 74 percent of Americans – including solid majorities of Republicans and Democrats – said the United States and its NATO allies should impose a no-fly zone in Ukraine, the poll found.

The White House on Friday said it was weighing cuts to U.S. imports of Russian oil, though it is proceeding cautiously, concerned about a spike in gasoline prices that would add to already high inflation.

Moreover, 81 percent of Americans think Washington should impose additional sanctions on Russia, up from 77 percent in a Reuters/IPSOS poll conducted on Monday and Tuesday. Support for more sanctions was also bipartisan.

Some 77 percent of respondents said the United States should seize the assets of Russian oligarchs associated with Russian President Vladimir Putin. 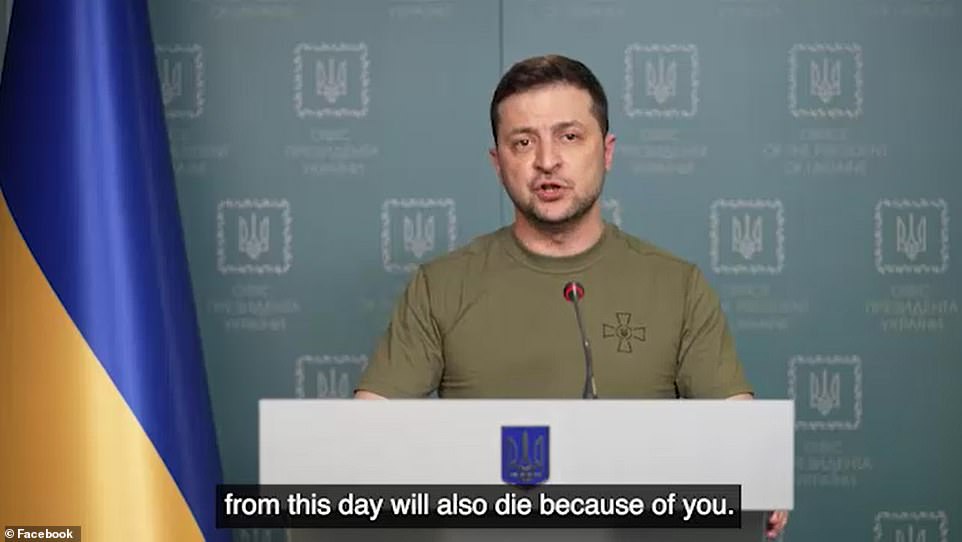 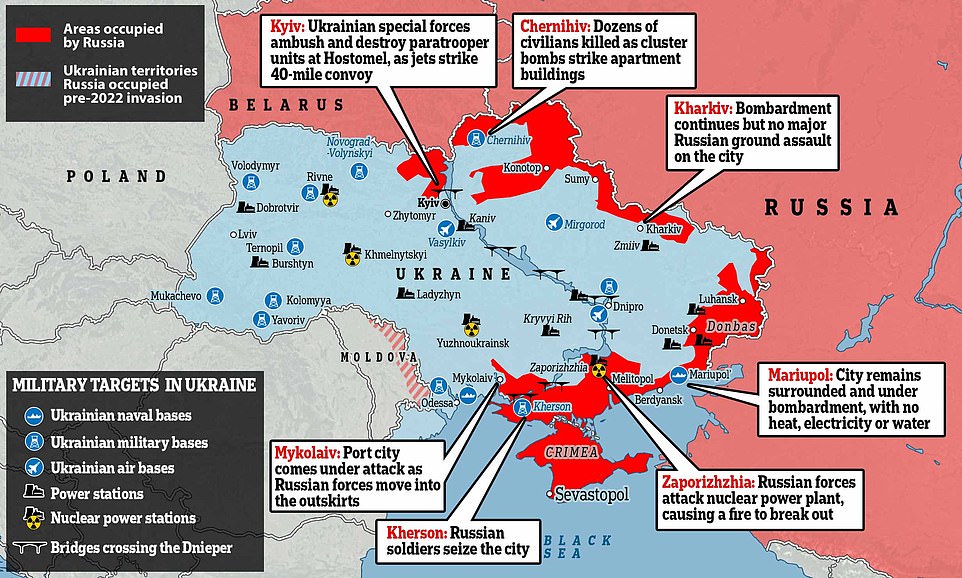 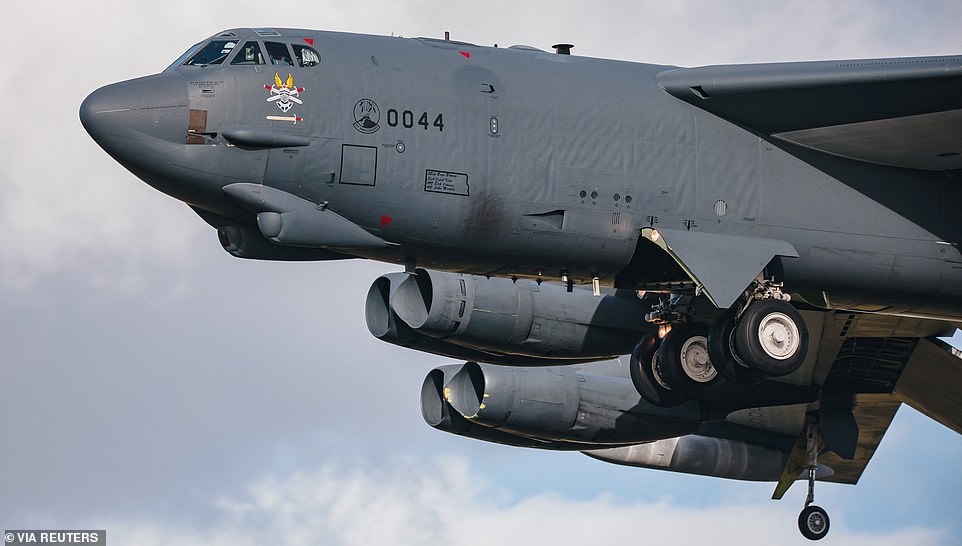 A B-52 bomber is pictured arriving at RAF Fairford on February 10. On Friday the bombers took off for exercises with Germany and Romania, above Romania 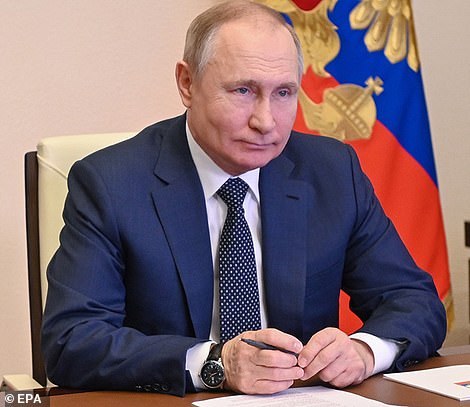 Vladimir Putin is pictured on Friday attending a ceremony of raising the national flag on the ‘Marshal Rokossovsky’ ferry in northern Russia, via a video conference at the Novo-Ogaryovo state residence outside Moscow. On Friday he cut off Facebook and Twitter and forced out independent media

Putin on Friday was moving to shut down independent media, forcing the BBC to leave the country and CNN to stop reporting.

He signed into effect new legislation imposing prison terms of up to 15 years for people charged with spreading ‘fake news’ about the military or calling for sanctions against the country.

Russia also cut access to Facebook, Twitter, and several news organizations’ websites, including the BBC, Voice of America and Radio Free Europe/Radio Liberty for spreading what it says is false information about its actions in Ukraine.

Meanwhile, Friday’s attack on the Zaporizhzhia nuclear plant in the southeastern city of Enerhodar was drawing worldwide condemnation.

The plant was under Russian control by Friday morning, after a tense night of heavy fighting.

Audio from inside the control room in Zaporizhzhia – Europe’s largest nuclear plant, which provided 20 percent of all Ukraine’s electricity – gave a sense of the panic among staff.

Workers could be heard desperately appealing to the Russians to stop shelling, warning them that they were risking a disaster.

The International Atomic Energy Agency (IAEA) has so far not registered any increase in radiation from around the site, but nuclear experts were warning that any shutting down of power to the plant could have dramatic consequences, stopping the cooling infrastructure with potentially catastrophic consequences.

Linda Thomas-Greenfield, the US ambassador to the UN, said on Friday in New York: ‘By the grace of God, the world narrowly averted a nuclear catastrophe last night.’ 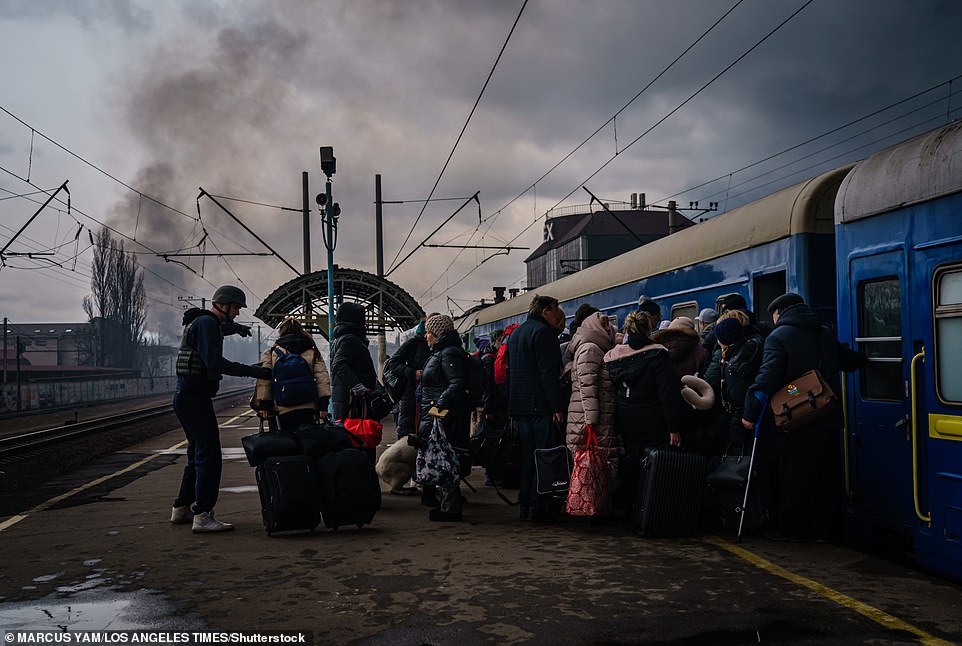 Civilians, mostly women and children rush to board any train car that still has any room on it in Irpin on Friday 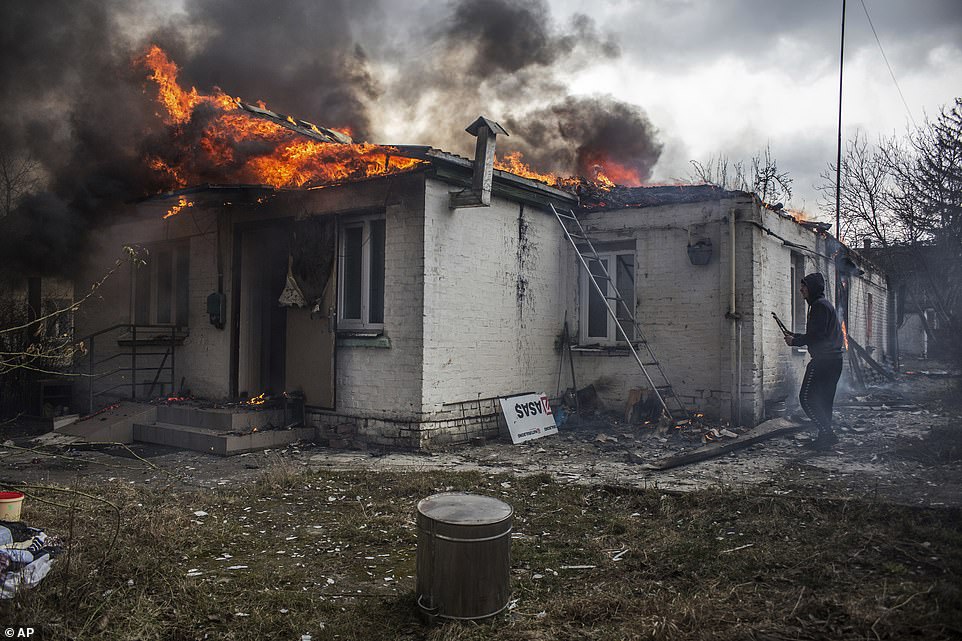 A house in Irpin, west of Kyiv, is pictured on fire on Friday as the town came under heavy Russian bombardment 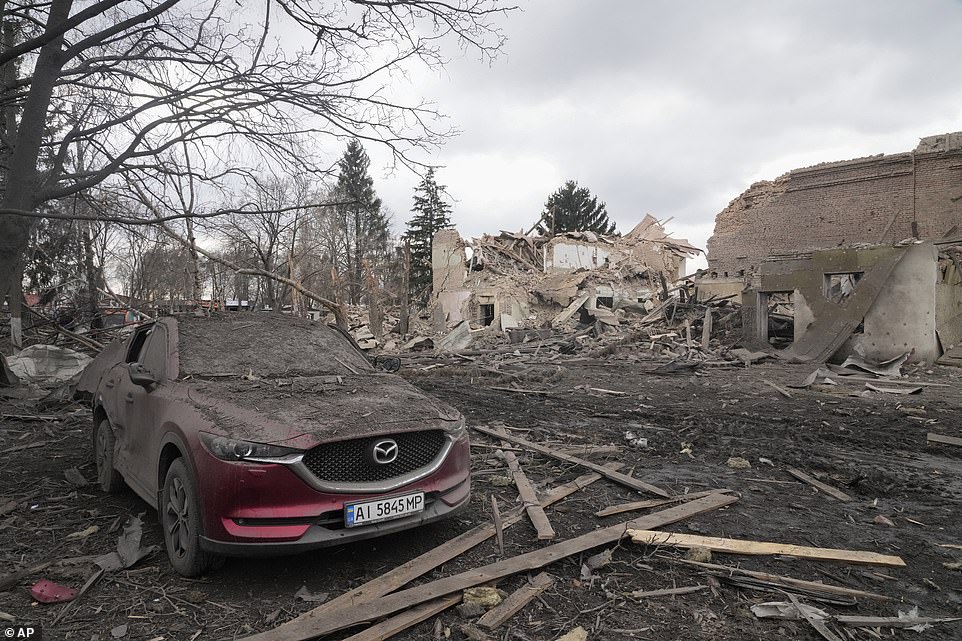 A burnt car stands next to the remains of the local house of culture on Friday, following a night air raid in the village of Byshiv, 20 miles west of Kyiv 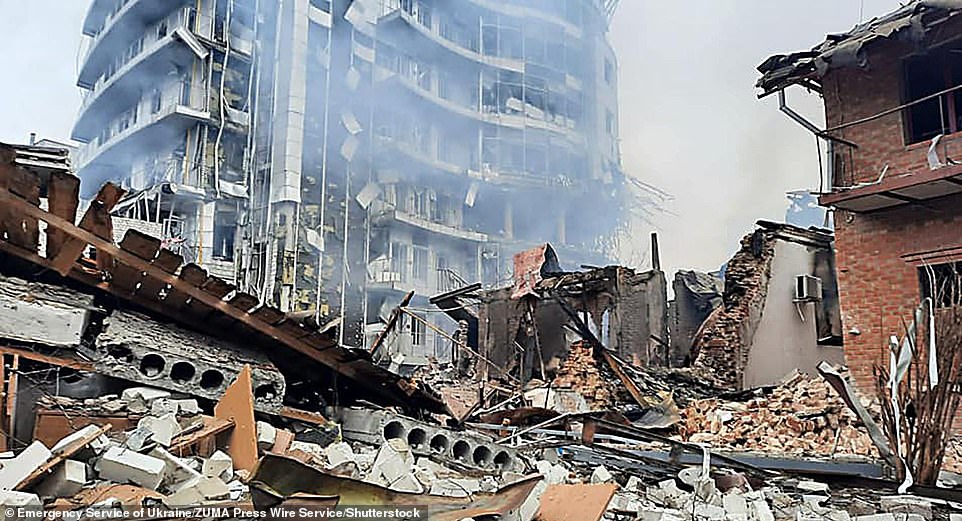 The city of Kharkiv, pictured, has been devastated by the Russian invasion. The city, to the east of Ukraine, has been under near constant bombardment

And in Ukraine, the situation remained dire with Mariupol, on the Black Sea, still under siege and the residents of Odessa awaiting an expected amphibious attack at any moment.

Kherson, which fell to the Russians on Wednesday, remained the only major city under Russian control on Day 10 of the invasion.

Yet the capital Kyiv was still being attacked nightly, and an ominous convoy of Russian military vehicles which at one point stretched 40 miles long was only 25 miles out of the city center – stalled, for now.

Russia is poised to deploy up to 1,000 more mercenaries to Ukraine, CNN reported, amid stories of Putin’s growing frustration at the Ukrainian resistance and the slow pace of his invasion.

The U.S. has already seen ‘some indications’ that Russian mercenaries may be involved in Moscow’s full-scale invasion of Ukraine ‘in some places,’ a senior defense official said earlier this week.

Some 1.2 million people have already fled Ukraine amid the Russian invasion, according to the latest figures from the UN High Commissioner for Refugees, with over half that number pouring into neighboring Poland.

‘Many more are on the move both inside and outside the country,’ the UNHCR said.

‘They are in need of protection and support. As the situation continues to unfold, an estimated 4 million people may flee Ukraine’.

Ukraine’s total population before the invasion was about 44 million.