KYIV, Ukraine (AP) — Russia drew closer to its goal of fully capturing Ukraine’s eastern industrial heartland of coal mines and factories as the Kremlin claimed to have taken control of 97% of one of the two provinces that make up the Donbas region.

Russian Defense Minister Sergei Shoigu said Tuesday that Moscow’s forces hold nearly all of Luhansk province. And it appears that Russia now occupies roughly half of Donetsk province, according to Ukrainian officials and military analysts.

After abandoning its bungled attempt to storm Kyiv two months ago, Russia declared that taking the entire Donbas is its main objective. Moscow-backed separatists have been battling Ukrainian government forces in the Donbas since 2014, and the region has borne the brunt of the Russian onslaught in recent weeks.

Early in the war, Russian troops also took control of the entire Kherson region and a large part of the Zaporizhzhia region, both in the south. Russian officials and their local appointees have talked about plans for those regions to either declare their independence or be folded into Russia.

But in what may be the latest instance of anti-Russian sabotage inside Ukraine, Russian state media said Tuesday that an explosion at a cafe in the city of Kherson wounded four people. Tass called the apparent bombing in the Russian-occupied city a “terror act.”

Before the Feb. 24 invasion, Ukrainian officials said Russia controlled some 7% of the country, including the Crimean Peninsula, which Russia annexed in 2014, and areas held by the separatists in Donetsk and Luhansk. Last week, Ukrainian President Volodymyr Zelenskyy said Russian forces hold 20% of the country.

While Russia has superior firepower, the Ukrainian defenders are entrenched and have shown the ability to counterattack. 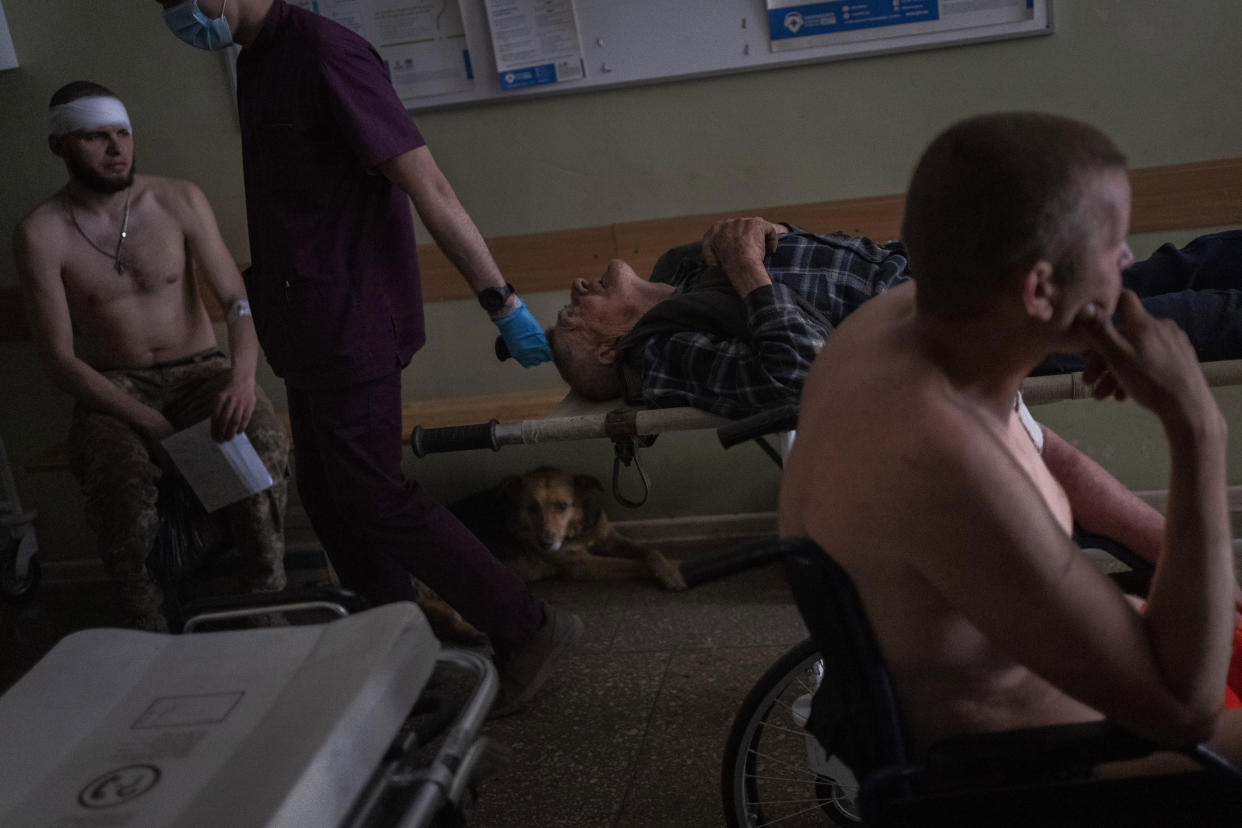 Zelenskyy said Russian forces made no significant advances in the eastern Donbas region over the past day.

“The absolutely heroic defense of the Donbas continues,” he said late Tuesday in his nightly video address.

Zelenskyy said the Russians clearly did not expect to meet so much resistance and are now trying to bring in additional troops and equipment. He said the same was true in the Kherson region.

Speaking earlier to a Financial Times conference, Zelenskyy insisted on Ukraine’s need to defeat Russia on the battlefield but also said he is still open to peace talks with Russian President Vladimir Putin.

“You’re not going to get to the negotiating table until neither side feels they have an advantage that they could push,” said Andrea Kendall-Taylor of the Washington-based Center for a New American Security.

The Russians “think they will be able to take the whole of the Donbas and then might use that as the opportunity to call for negotiations,” Kendall-Taylor said at an online seminar organized by Columbia and New York universities.

Shoigu, the Russian defense minister, said Moscow’s forces have seized the residential quarters of Sievierodonetsk and are fighting to take control of an industrial zone on the city’s outskirts and nearby towns.

Sievierodonetsk and nearby Lysychansk have seen heavy fighting in recent weeks. They are among a few cities and towns in the Luhansk region still holding out against the Russian invasion, which is being helped by local pro-Kremlin forces.

Shoigu added that Russian troops were pressing their offensive toward the town of Popasna and have taken control of Lyman and Sviatohirsk and 15 other towns in the region. 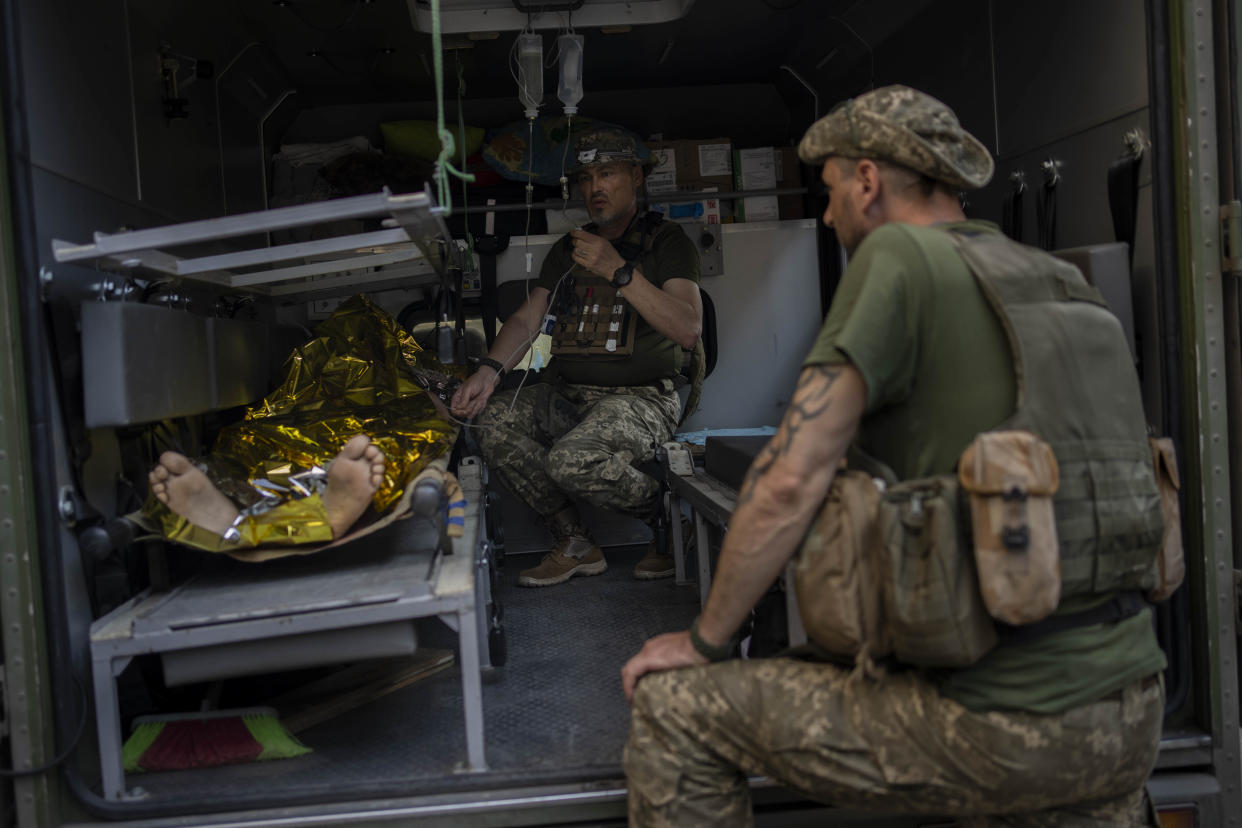 Ukrainian presidential adviser Mykhailo Podolyak urged his people not to be downhearted about the battlefield reverses.

“Don’t let the news that we’ve ceded something scare you,” he said in a video address. “It is clear that tactical maneuvers are ongoing. We cede something, we take something back.”

“The toughest street battles continue, with varying degrees of success,” Haidai said. “The situation constantly changes, but the Ukrainians are repelling attacks.”

Moscow’s forces also kept up their artillery barrage of Lysychansk. Haidai said Russian troops shelled a market, a school and a college building, destroying the latter. At least three people were wounded, he said.

“A total destruction of the city is under way. Russian shelling has intensified significantly over the past 24 hours. Russians are using scorched-earth tactics,” Haidai said.

Meanwhile, the U.S. military has begun training Ukrainian forces on the sophisticated multiple rocket launchers that the Biden administration agreed last week to provide. The Pentagon said the training is going on at a base in Germany and elsewhere in Europe.

The High Mobility Artillery Rocket System, or HIMARS, is mounted on a truck and can carry a container with six rockets, which can travel about 45 miles (70 kilometers). Officials said it would take about three weeks of training before they could go to the battlefront.

In other developments, Zelenskyy said Ukraine planned to publish a special “Book of Executioners” next week with information about war crimes committed by the Russian army.

“These are specific facts about specific people who are guilty of specific cruel crimes against Ukrainians,” he said. Those named would include not only people who carried out the crimes but their commanders, he said.