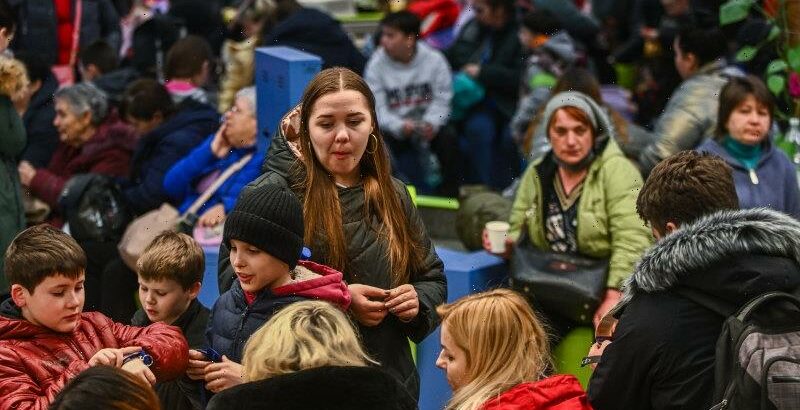 Kyiv: Russia has stepped up its bombardment of Ukraine’s capital Kyiv, smashing apartments and a subway station, while civilians in 2000 cars fled Mariupol along a humanitarian corridor in what was believed to be the biggest evacuation yet from the desperately besieged seaport.

On the diplomatic front, another round of talks began between Russia and Ukraine via video, and the leaders of three European Union countries — including Poland, a NATO member on Ukraine’s doorstep — planned a visit to the embattled capital in a bold show of support on Wednesday (AEDT). 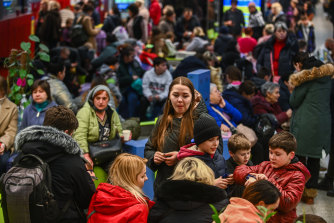 Refugees from Ukraine wait at a shelter in Krakow, Poland on Tuesday (AEDT).Credit:Getty

With the number of people driven from the country by the war eclipsing 3 million, large explosions thundered across Kyiv before dawn (local time) from what Ukrainian authorities said were artillery strikes, as Russia’s assault on the capital appeared to become more systematic and edged closer to the city centre.

The strikes, carried out of the 20th day of Russia’s invasion, targeted a western district of Kyiv, disrupting a relative calm that returned after an initial advance by Moscow’s forces was stopped in the early days of the war.

The United Nations said close to 700 civilians in Ukraine have been confirmed killed, with the true figure probably much higher.

Fox News video journalist Pierre Zakrzewski, 55, was killed when the vehicle he was travelling in outside of Kyiv with another reporter came under fire on Monday, the network said. He was the second journalist killed in Ukraine in two days. 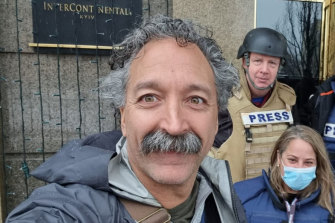 Fox News cameraman Pierre Zakrzewski was killed on Monday while on assignment in Ukraine.Credit:AP

Zakrzewski was working alongside reporter Benjamin Hall who has been in hospital since the incident, when their vehicle was hit in Horenka, the network said.

Brent Renaud, a documentary filmmaker and another veteran of covering war zones, died on Sunday after Russian forces opened fire on his vehicle.

The leaders of Poland, the Czech Republic and Slovenia set out for Kyiv by train on Wednesday morning (AEDT) despite the security risks, in a visit EU officials said was not sanctioned by other members of the 27-nation bloc.

“The aim of the visit is to express the EU’s unequivocal support for Ukraine and its freedom and independence,” Czech Prime Minister Petr Fiala said in a tweet.

He was joined by fellow Prime Ministers Janez Jansa of Slovenia and Mateusz Morawiecki of Poland, as well as Jaroslaw Kaczynski, Poland’s de facto leader.

New efforts to bring civilians to safety and deliver aid were underway around the country. The Red Cross said it was working to evacuate people from the northeastern town of Sumy near the Russian border in about 70 buses.

One of the most desperate situations is in Mariupol, the southern city of 430,000 where officials say a weeks-long siege has killed more than 2300 people and left residents struggling for food, water, heat and medicine.

The Mariupol city council reported that 2000 civilian cars had managed to leave along a humanitarian corridor that runs for more than 260 kilometres west to the city of Zaporizhzhia. Another 2000 cars were waiting to leave along the route, the council said.

As for the latest round of talks, Ukrainian presidential aide Mykhailo Podolyak said they were discussing a ceasefire and Russian troop withdrawal. Russian Foreign Minister Sergey Lavrov said Moscow would press its demands that Ukraine drop its bid to join NATO, adopt a neutral status and “demilitarise.”

“We have heard for many years about the open doors, but we also heard that we can’t enter those doors,” he said. “This is the truth, and we have simply to accept it as it is.

Russian forces were about 15 kilometres from the centre of the city as of Tuesday (AEDT). Fighting has intensified on Kyiv’s outskirts in recent days, and air raid sirens wailed inside the capital.

Tuesday’s artillery strikes hit the Svyatoshynskyi district of western Kyiv, adjacent to the suburb of Irpin, which has seen some of the worst fighting of the war. 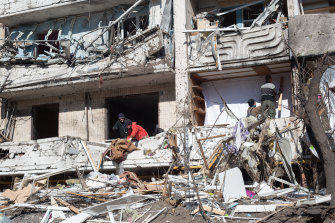 A residential building on Mostytska Street in Kyiv which was hit by a rocket.Credit:Getty

Flames shot out of the 15-story apartment building and smoke choked the air as firefighters climbed ladders to rescue people. The assault blackened several floors of the building, ripped a hole in the ground outside and blew out windows in neighbouring apartment blocks. Rescue workers said at least one person was killed.

“Yesterday we extinguished one fire, today another. It is very difficult,” a firefighter who gave only his first name, Andriy, said outside the building, tears falling from his eyes.

“People are dying, and the worst thing is that children are dying. They haven’t lived their lives and they have already seen this.”

Shockwaves from an explosion also damaged the entry to a downtown subway station that has been used as a bomb shelter.

A 10-story apartment building in the Podilsky district of Kyiv, north of the government quarter, was damaged. Russian forces also stepped up strikes overnight on Irpin and the northwest Kyiv suburbs of Hostomel and Bucha, said the head of the capital region, Oleksiy Kuleba.

A judge and an investigator in Russia’s prosecution of two outspoken critics of alleged corruption and rights abuses are also a focus of the sanctions.

The sanctions were announced as China said its stance on the Ukraine conflict is “completely objective, impartial and constructive,” and repeated accusations the US is spreading misinformation over reports Beijing has responded positively to a Russian request for military supplies.

Beijing has refused to criticise Russia over its invasion of Ukraine, or even to refer to the conflict as a “war”.