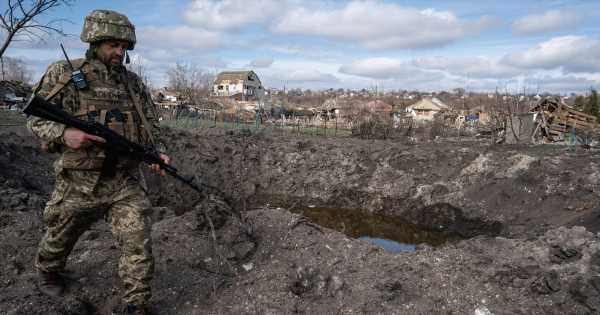 Ukrainians are being forced to fight for Russia in a sickening breach of the Geneva Convention, it is claimed.

As Russian soldiers retreat from land gained over the past several weeks, the outskirts of Mariupol in the south east of Ukraine remains under the brutal control of Vladimir Putin's men.

According to the Ukrainian government, reports of devastating conscription are not only coming out of the coastal city but also 140 miles away in Vasylivka, where men were reportedly being detained at a checkpoint.

Ukraine's ombudsman Lyudmila Denisova said: "On the outskirts of Mariupol, which is temporarily controlled by Russian militants, the occupiers began forcibly mobilising men."

In an appeal to the UN and the Organisation for Security and Co-operation in Europe to investigate, she added: "Forced mobilisation in Russian-occupied territories violates Article 51 of the Geneva Convention, which strictly prohibits the occupying power from forcing protected persons to serve in its armed or auxiliary forces."

"It is likely that these men will also be forced to fight for units of the racist army."

Ukraine's President Volodymr Zelensky has told the Greek parliament that the only thing left just about standing in Mariupol is the decimated population of about 100,000 people.

He said: "The absolute majority of buildings in the city are completely destroyed.

"The Russian military destroyed everything: hospitals, maternity hospitals, residential buildings, a city theatre in which civilians were hiding from bombs."

Exactly how many civilians in Mariupol have been killed by Russian soldiers and shelling has not been officially confirmed but Ukraine's former interior minister, Arsen Avakov has estimated around 30,000.

Facebook and Instagram's parent company, Meta, announced that they'd observed a rise in hacks and attempted impersonations since the war in Ukraine began on February 24.

A cyber operation called Ghostwriter attempted to hack into Ukrainian military personnel through their Facebook accounts.