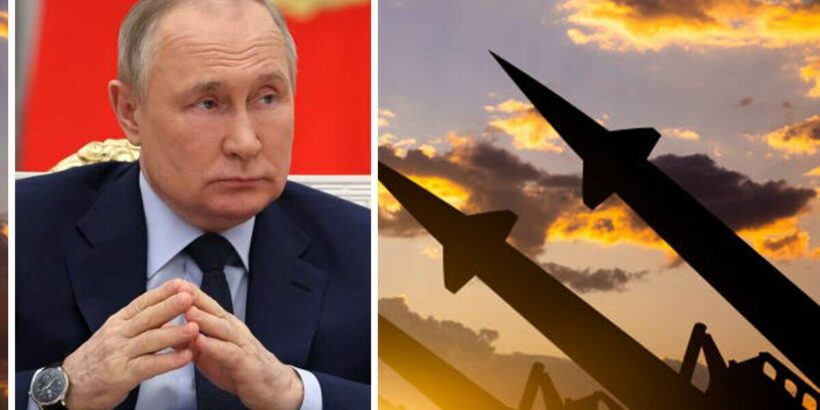 Putin's hand appears to shake before he meets with Lukashenko

Russian President Vladimir Putin believes his country’s latest nuclear missile will make countries “think twice” before threatening Moscow’s interests in the world. The new Sarmat missile was launched from Plesetsk in the North-west of the country and hit targets in the Kamchatka peninsula in the far east.

After the launch, President Putin told reporters: “The new complex has the highest tactical and technical characteristics and is capable of overcoming all modern means of anti-missile defence.

“It has no analogues in the world and will not have for a long time to come.

“This truly unique weapon will strengthen the combat potential of our armed forces, reliably ensure Russia’s security from external threats and provide food for thought for those who, in the heat of frenzied aggressive rhetoric, try to threaten our country.”

According to the US Congressional Research Service, Moscow is expected to deploy the Sarmat with 10 or more warheads on each missile.

How fast is the Sarmat missile?

Russia’s military has said the missile is capable of flying 27 times faster than the speed of sound.

Moscow made the test launch from a silo launcher last Wednesday and confirmed it had notified the US beforehand.

The Pentagon added that it saw the test as routine and not a threat to US security.

Within an hour of being launched from northern Russia, the missile is thought to be able to hit targets halfway around the world.

Compared with the atomic bomb dropped on the Japanese city of Hiroshima in World War Two the Sarmat has an explosive yield which is 50 times greater.

Ian Williams, a fellow at the Centre for Strategic and International Studies think tank, said: “This is probably the most destructive single weapon on earth.”

How many nuclear weapons does Russia have?

All figures are estimates but according to the Bulletin of the Atomic Scientists, Russia has the largest supply of nuclear weapons in the world.

Moscow owns approximately 4,447 warheads – the devices that trigger a nuclear explosion – of which 1,588 are deployed on ballistic missiles and heavy bomber bases.

Statistics from the Federation of American Scientists demonstrate that the US has the second-highest global stockpile with 5,600 nuclear weapons.

Pakistan and India are understood to be the only remaining nations with more than 100 nuclear weapons each.