A Russian goat whose bromance with a tiger blossomed after the predator decided not to have him for dinner, has died after an attack from the big cat caused his health to deteriorate.

In 2015, safari park staff placed the goat, Timur, in the enclosure of male Siberian tiger, Amur, as live prey.

Instead of tearing the bleating creature to shreds, Amur made friends with his meal. He even refrained from chomping him when Timur muscled in on his bed. 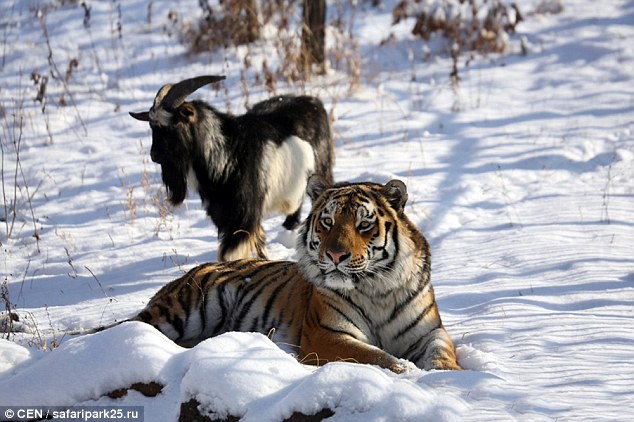 Undated file photo shows Timur, pictured behind Amur, who was sent into the big cat’s den in 2015 as live prey and was supposed to be the predator’s lunch 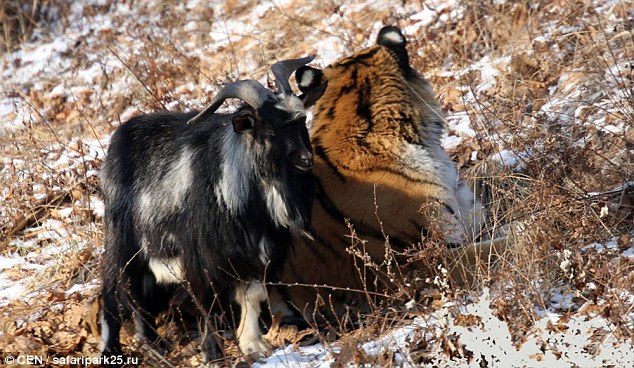 The adventures of the two unlikely pals, pictured, came to an end on Tuesday after Timur passed away 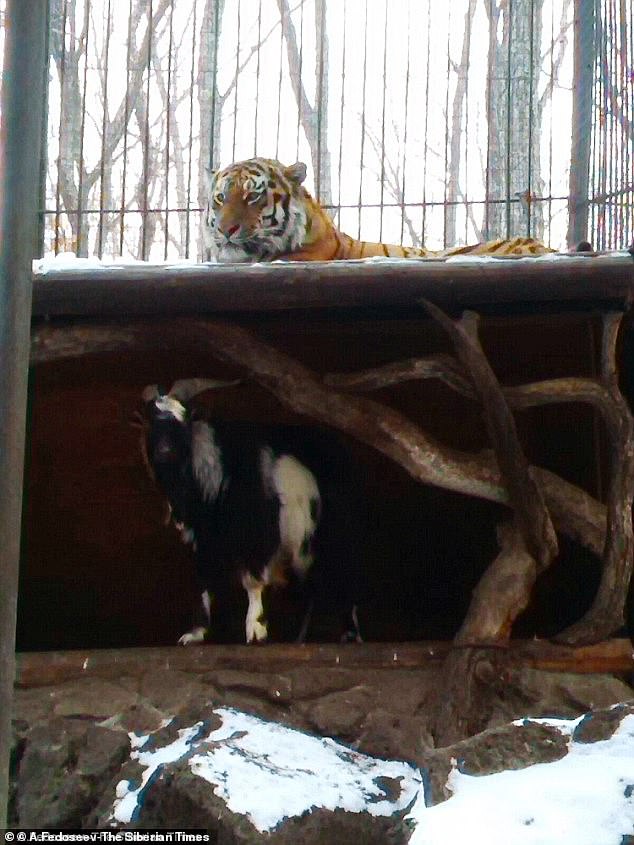 Undated file photo. The tiger didn’t even get angry when the billy goat muscled in on his bed (pictured)

Keepers at the park said he avoided a near-certain death in the tiger’s pen because he was fearless.

The pair lived together in relative harmony for the past five years, however, Amur lashed out at Timur after the goat grew confident and started to challenge him.

‘Timur hassled the tiger for about a month,’ said Dmitry Mezentsev, the director of the safari park.

In January 2016 the tiger lost patience after the goat stepped on him. He grabbed Timur and threw him off a hillock.

After their tiff, the frenemies were separated but Timur’s health took a turn for the worse.

He started limping and lost some of his zest for life, while remaining ‘cheeky’, Mezentsev said. 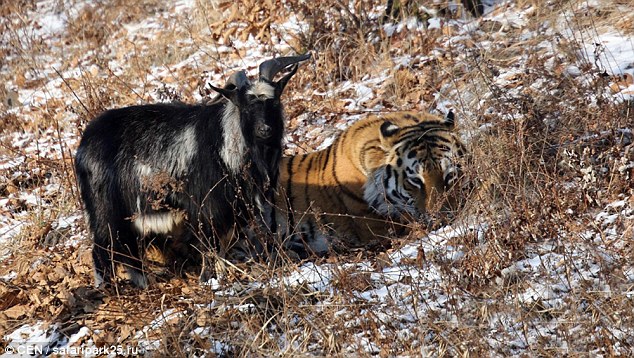 Undated file photo. After the two were separated in 2016, park head Dmitry Mezentsev attempted to find a suitable partner for Timur 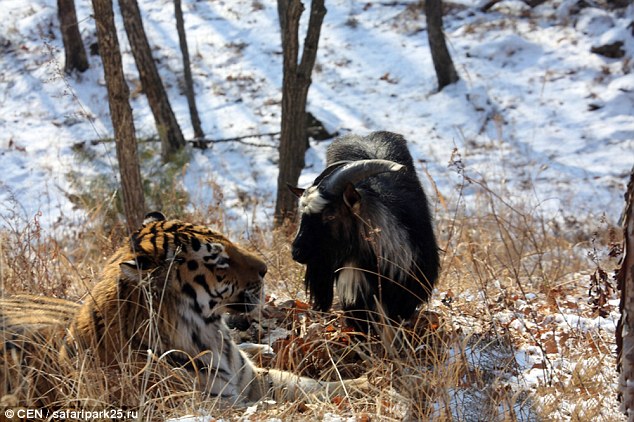 Undated file photo. The park sent the goat to Moscow for treatment but he never fully recovered from the attack by the tiger, who is still alive and living at the safari park

The park sent the goat to Moscow for treatment but he never fully recovered from the attack by the tiger, who is still alive and living at the safari park.

At one point, The goat became so content with his tiger pal that he could not stop eating and grew obese.

The goat died of natural causes but his health deteriorated following the altercation with Timur.

Timur’s heart stopped beating on November 5,’ Mezentsev said from the park near the Pacific port of Vladivostok.

He will be buried with ‘full honours,’ his keeper Elvira Golovina added.

In a story that captivated Russia, Timur was sent to the safari park as live prey for Amur the Siberian tiger.

Mezentsev, who studies tigers and leopards, at the time described the unlikely friendship as nothing short of a miracle and a ‘sign from above’ for people to be kinder to each other.

Timur and Amur slept in the same enclosure, ate and played together. The tiger attempted to teach the goat how to catch prey. They also playfully head-butted and chased each other. 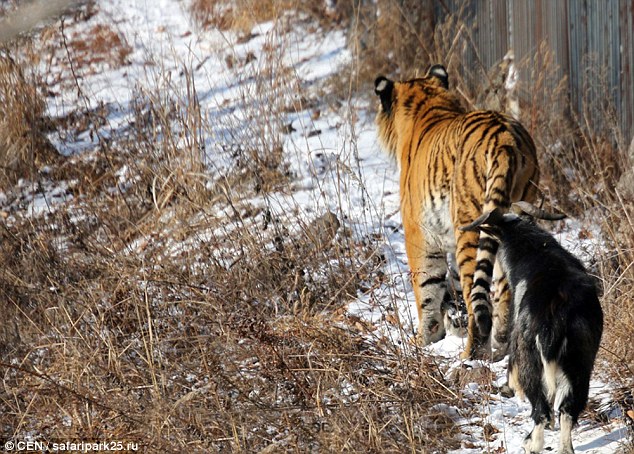 Undated file photo. Park keepers said that the goat, Timur, only survived because he was ‘fearless’

The owners now plan to erect a bronze monument on Timur’s grave.

Many Russians said online they were saddened by his passing.

‘Fearless Timur, you will forever remain in our hearts,’ said one mourner.

The pair turned into a huge tourist attraction for Russians and the development of their relationship has been followed avidly on the web.

The park invested in a huge production line in souvenirs of the unlikely double act, their most popular animals.

Park officials were under huge pressure to separate them, amid fears by many followers – including wildlife experts – that the tiger would suddenly turn on the goat and eat him.

Shortly after the tiger put an end to Timur’s annoying behaviour in January 2016, a goat owner tried to offer the fearless goat a mate.

The lady sent courting was a female goat named after the German Chancellor Angela Merkel.

Merkel – who sported a Louis Vuitton collar and horn rings – began wearing a tiger-skin print cloth in the hope that she would be more attractive to her prize.

‘[Her partner] needs to be someone tough, and I reckon any goat that can tame a tiger is a good candidate for the job,’ said Merkel’s owner, farmer Oleg Sirota.

Oleg added: ‘She really wants to see her man. There is a picture of Timur in her stall and she keeps on looking at him all the time.’