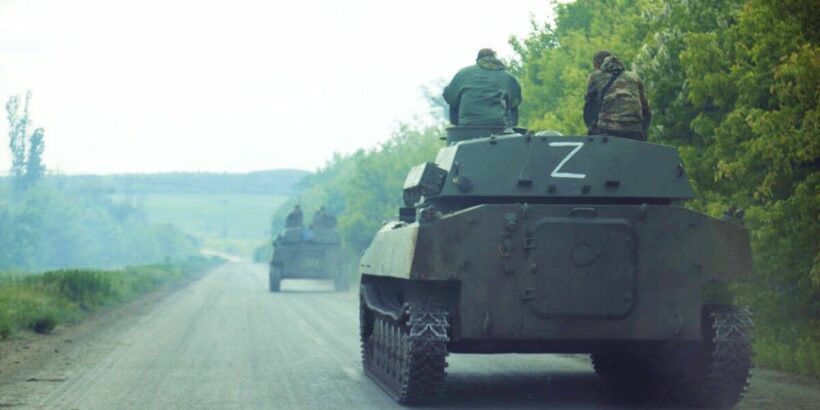 Russia: State TV claims POW camp has been set up in Donetsk

With the war now into its fourth month, Moscow has focused efforts on the southern and eastern parts of Ukraine in an attempt to create a land bridge between the mainland and Crimea. In some of the heaviest fighting to date, Russian forces have made small advances and continue to be held back by determined resistance.

The latest Russian humiliation comes in the Donetsk Oblast area, where a small village near the town of Sloviansk held a checkpoint as Russian forces advanced.

According to media sources in Ukraine, Russian troops tried unsuccessfully to take the village of Dovenke.

In a Tweet by the Kyiv based Independent, the details were given.

It read: “One more Russian offensive towards Sloviansk fails.

“Ukraine’s General Staff said that Russian troops had unsuccessfully tried to storm the village of Dovhenke near Sloviansk, Donetsk Oblast.”

Continuing the coverage of the intensity of Russian advances, the outlet added details of other villages under attack.

Yet heavy resistance by Ukrainian defence forces has inflicted serious damage to Russian assets since the start of the war.

According to Ukrainian media, some of the highlights of Russian losses include over 30,500 troops, 1,358 tanks and 3,302 armoured personnel carriers.

In the air, Ukrainian forces have claimed 208 fighter planes, 174 helicopters and over 500 Russian drones.

At sea, 13 vessels have been destroyed by Ukrainian forces, including the pride of Russia’s Black Sea fleet, the Moskva.

Ukraine has continually asked for more weapons in order to defend itself.

For the first time since the start of the war, the United States of America has agreed to supply longer range missile to Ukraine.

Initially, fears in Washington suggested Ukraine would use such equipment to strike targets in Russia, but President Joe Biden has now approved their dispatch to Kyiv.

As part of a £556million arms supply deal to Ukraine, the US will send M142 High Mobility Artillery Rocket System (HIMARS) to the war-torn country.

The HIMARS can launch multiple precision-guided missiles accurately to a range of 45 miles, a distance which extends far further than Ukraine’s current conventional shelling capabilities.

Last month, Ukraine’s army chief said that getting the HIMARS units would be “crucial” in allowing it to counter Russian missile attacks.

White House officials agreed to provide the rockets, they said, only after gaining assurances from President Volodymyr Zelensky that the weapons would not be used to attack targets inside Russia.

Mr Biden wrote on Wednesday: “We are not going to send to Ukraine rocket systems that can strike into Russia.”

Also included in the latest supply of hardware to Ukraine will be helicopters, anti-tank weapons, vehicles and spare parts.

The delivery will be the 11th such provision of military equipment to Ukraine since the start of the war.

Currently, Russian forces have occupied most of Luhansk and are now focusing on Donetsk as their next target.

Putin’s troops have also captured around 70 percent of the city of Severodonestsk according to the regional governor.

Don’t forget to have your say in our comments section below – Every Voice Matters!