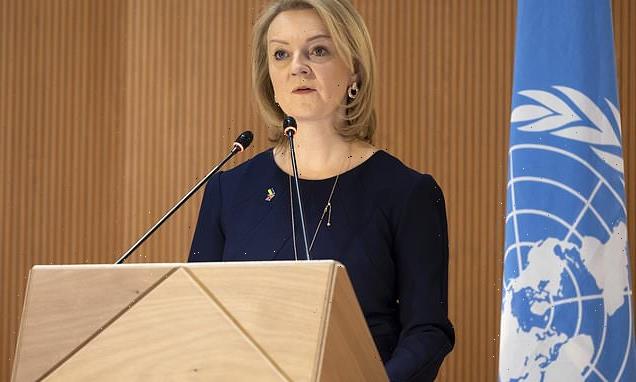 Russian ships have been banned from UK ports, the Foreign, Commonwealth and Development Office has announced.

A statement said: ‘The ban includes any vessels owned or operated by anyone connected to Russia and authorities will also gain new powers to detain Russian vessels.’

Additional economic measures introduced by Foreign Secretary Liz Truss ban UK individuals and organisations from providing financial services to the Central Bank of the Russian Federation, as well as the Ministry of Finance and National Wealth Fund.

Ms Truss said: ‘We said Putin and those around him would pay the price for their unprovoked and illegal invasion of Ukraine, and we are being true to our word.

‘The ban on Russian ships from UK ports, and new economic sanctions against key Russian financial institutions including its central bank, in close co-ordination with our allies, will degrade Russia’s economy and help make sure Putin loses.

‘We stand with Ukraine, its people and its democracy, and will continue to support them diplomatically, economically, politically and defensively.’

The ban on Russian ships came as it was announced a further £80 million in aid is being given to Ukraine from the UK. 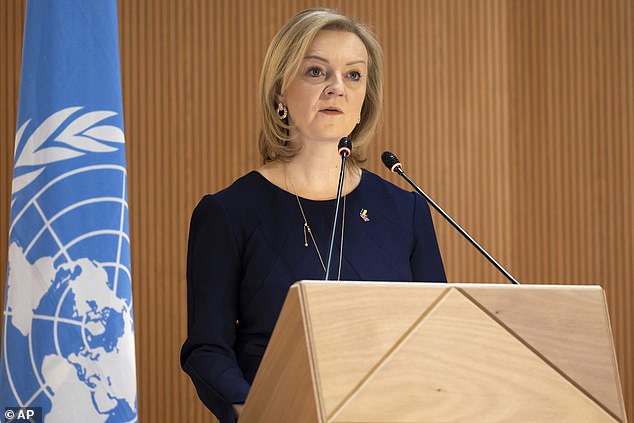 Foreign Secretary Liz Truss said: ‘We said Putin and those around him would pay the price for their unprovoked and illegal invasion of Ukraine, and we are being true to our word.’

The latest financial commitment brings the total UK humanitarian aid package for the country to £120 million.

The money is being provided in an effort to save lives, protect vulnerable people in Ukraine and the wider region, and to tackle the growing humanitarian crisis, the Foreign, Commonwealth and Development Office said.

Some £40 million was announced last weekend to help aid agencies respond to the deteriorating situation in Ukraine, giving access to basic necessities and medical supplies.

A £100 million economic package of Official Development Assistance funding for Ukraine was announced earlier this month to bolster the economy and reduce its reliance on Russian gas imports.

Both the Prime Minister Boris Johnson and Liz Truss said there was a duty to help.

Mr Johnson said: ‘With every hour, the passionate desire of the people of Ukraine to defend their country has become more apparent and millions of people around the world have been stirred and moved by their courage.

‘The reality is that whatever happens in the coming days or weeks, the Ukrainian people have shown already that their spirit will not be broken, and they will not be subdued.

‘We as the international community have a responsibility to do everything we can to help the Ukrainians.’

Ms Truss said: ‘We have a moral duty to support Ukrainians affected by Putin’s unprovoked aggression. Britain is at the forefront of efforts to supply life-saving humanitarian aid, as well as political, economic and defensive support.

‘Our message to the Ukrainian people is simple: we will help you and stand with you in the fight for the freedom and sovereignty of Ukraine.’

Mr Johnson, who on Tuesday was visiting Nato members Poland and Estonia to shore up support for the defence alliance, has ruled out British forces fighting in Ukraine. 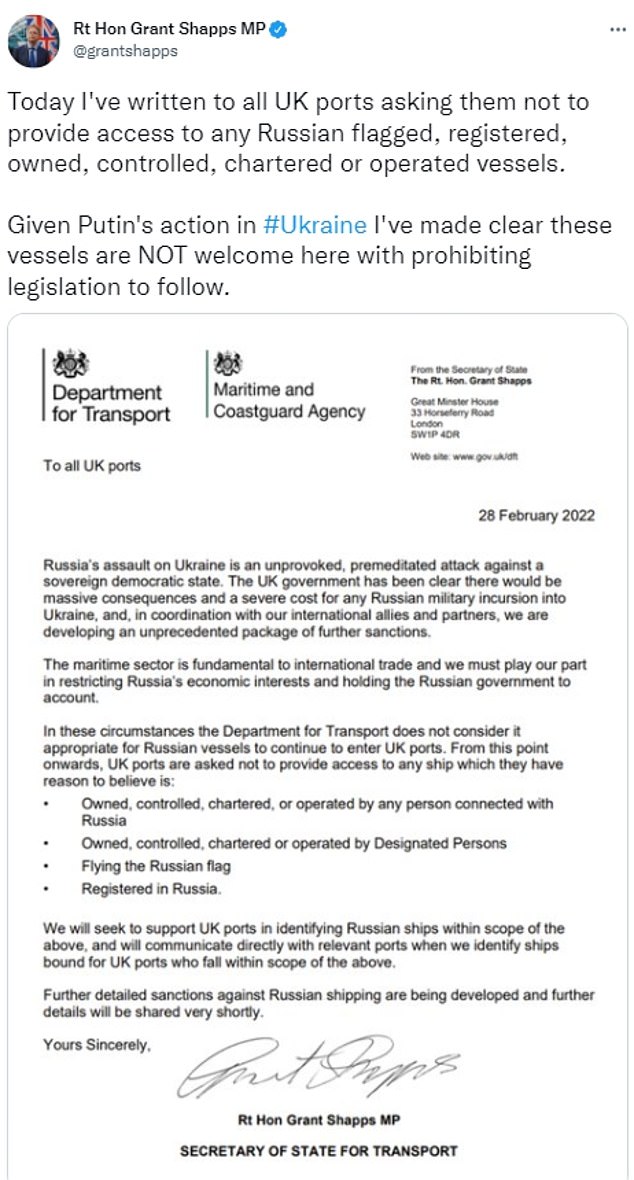 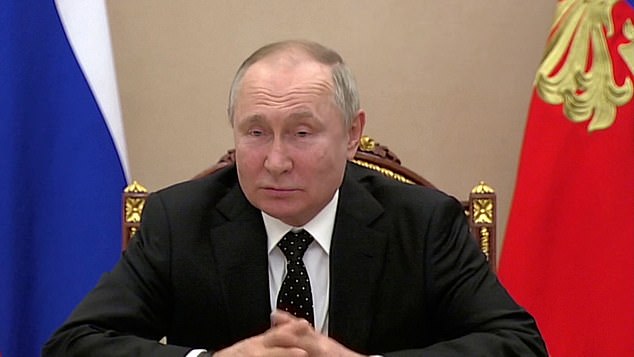 Grant Shapps yesterday told UK ports to turn away Russian-linked ships saying they are ‘not welcome’.

The Transport Secretary acted after protests that a Moscow-owned tanker was due to dock in Orkney tomorrow.

The NS Champion belongs to shipping company Sovcomflot, a firm that is majority owned by the Russian state, and Orkney Islands Council had said it is powerless to prevent it docking.

Mr Shapps said tonight he has written to all UK ports saying they should deny access to Russian flagged, registered or operated vessels.

He tweeted: ‘Today I’ve written to all UK ports asking them not to provide access to any Russian flagged, registered, owned, controlled, chartered or operated vessels.

‘Given Putin’s action in #Ukraine I’ve made clear these vessels are NOT welcome here with prohibiting legislation to follow.’

In his letter to all UK ports, Mr Shapps said the maritime sector ‘must play our part’ in sanctioning Russia over Vladimir Putin’s invasion of Ukraine.

He wrote: ‘Russia’s assault on Ukraine is an unprovoked, premeditated attack against a sovereign democratic state. The UK Government has been clear there would be massive consequences and a severe cost for any Russian military incursion into Ukraine, and, in co-ordination with our international allies and partners, we are developing an unprecedented package of further sanctions.

‘The maritime sector is fundamental to international trade and we must play our part in restricting Russia’s economic interests and holding the Russian government to account.

‘In these circumstances the Department for Transport does not consider it appropriate for Russian vessels to continue to enter UK ports. From this point onwards, UK ports are asked not to provide access to any ship which they have reason to believe is: Owned, controlled, chartered, or operated by any person connected with Russia owned, controlled, chartered or operated by designated persons flying the Russian flag registered in Russia.

‘Further detailed sanctions against Russian shipping are being developed and further details will be shared very shortly.’

Earlier, Nicola Sturgeon waded into the row saying allowing the tanker to dock would send the wrong message to the people of Ukraine. 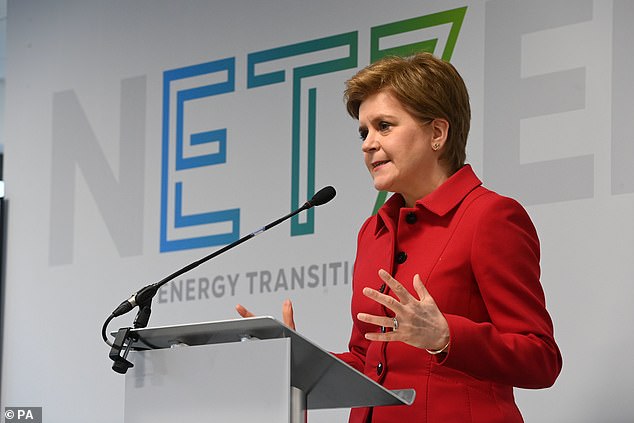 Earlier, Nicola Sturgeon waded into the row saying allowing the tanker to dock would send the wrong message to the people of Ukraine

‘Let me be blunt, I don’t want that tanker to dock in Orkney tomorrow, ‘ Ms Sturgeon told the media during a visit to Aberdeen.

She continued: ‘This is an issue that is reserved to the UK Government, this tanker is majority owned by a Russian government-controlled company.

‘It would go against, if not the letter, then certainly the spirit of the sanctions and I think it would send the wrong message to people in Ukraine and across the world right now.

‘It is a matter for the UK Government. I personally had discussions last night with Grant Shapps, the UK Secretary of State for Transport.

‘To be fair to him, he agreed with me about how unacceptable it would be for that tanker to dock as planned, and we’re continuing discussions with him and his officials over the course of today.

‘Hopefully we can find a way of stopping that happening.’