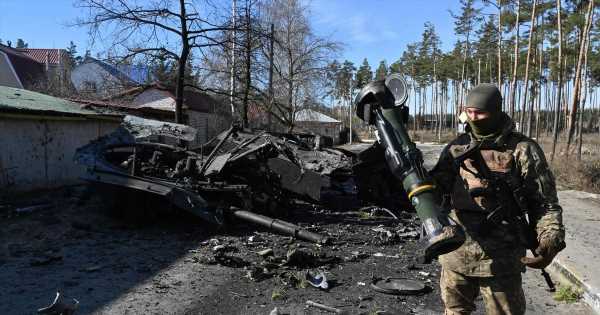 Russian soldiers are said to be walking off into the woods and deserting the army, as more than 7,000 of Vladimir Putin's troops have been killed during the invasion of Ukraine.

According to US intelligence estimates, in just three weeks of fighting, the Russians have lost more troops in Ukraine, than the Americans did over a period of 20 years in Iraq and Afghanistan combined.

To make things worse, the Russian military has also lost four major generals, along with a dozen top commanders.

Western officials say that around 20 Russian generals were in Ukraine as part of the war effort and that they may have pushed closer to the front to boost morale.

Pentagon officials say that a high number of war dead can destroy the will to continue fighting, with reports of Russian troops just parking their vehicles and walking off into the woods, deserting the war effort.

The high rate of casualties explains in part why Russia's convoy of forces has remained largely stalled outside of the Ukrainian capital Kyiv.

Evelyn Farkas, the top Pentagon official for Russia and Ukraine during Obama's presidency said: "Losses like this affect morale and unit cohesion, especially since these soldiers don’t understand why they’re fighting.

Back in Russia however, Putin is in control of the media, manipulating what the Russian public hear about the war.

Since the invasion began, he has exerted iron control over the news outlets in Russia, with state media not publicising most casualties – with the number of confirmed military casualties just 498 so far – and has minimised the destruction.

If Russian military deaths continue to rise, the civic organisations that called attention to troop deaths and injuries during the Soviet invasion of Afghanistan could once more come to prominence.

But according to some military specialists and lawmakers Putin is unlikely to change his strategy, despite the toll.

US House of Representative member Jason Crow, who is also a member of the House Armed Services and Intelligence committees, said: “It is stunning, and the Russians haven’t even gotten to the worst of it, when they hit urban combat in the cities.

“I don’t think it’ll have an impact on Putin’s calculus. He is not willing to lose. He’s been backed into a corner and will continue to throw troops at the problem.”