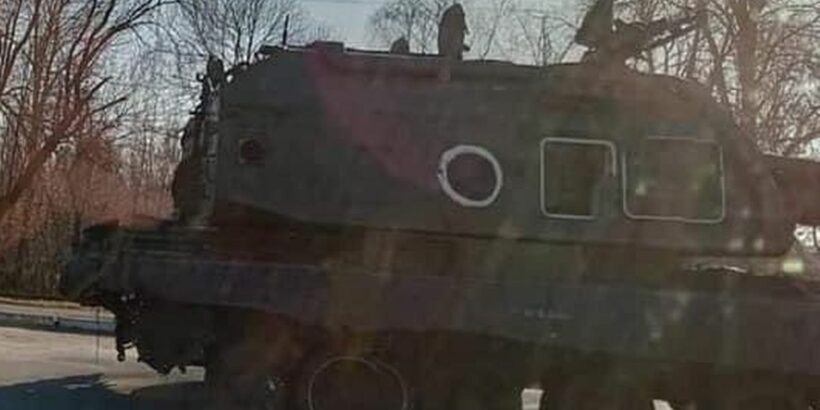 A Ukrainian farmer has been pictured stealing a Russian tank using his tractor, just a few weeks after another bloke went viral for doing the same thing.

The area where it happened is unknown, but a Ukrainian journalist posted photos of the incident on Twitter yesterday (March 21).

It shows a huge tractor pulling a partially-destroyed tank down a road.

But the marking on the tank has been questioned by many on social media.

While much has been made of the “Z” and “V” markings on Russian tanks since the start of the invasion into Ukraine in February – the former is for Russian-specific troops, while the V denotes Belarusian tanks.

And now it appears that there is a new marking to contend with. The newly-taken tank has the letter “O” on the side of it.

According to several sources, that stands for this is another way of identifying Belarusian troops.

Simon Miles, a history and Slavic studies professor at Duke University, told Huffington Post: “It’s even more important when you’ve got high-speed warfare to have those types of signals so that people don’t fire on their own.

“You want to be able to quickly, at a glance, say, ‘OK, those are my people.

“I’m supposed to be following them.’

“Or, ‘Oh, shoot, I’ve gotten lost, and I’m following a battalion that isn’t mine.’

“Because that does happen.”

There are several different theories about the meanings of the letters, none of which have been confirmed by the Russian leadership, however.

Some sources state that the V corresponds to the Russian Marines, while the Z – which appears in two forms – is denotes the Eastern and Southern military units.

There is also two more letters – an X and an A.

The X, sofrep.com states, belongs to the forces of Ramzan Kadyrov, the Putin-loving warlord of Russia ’s Chechnya region.

Meanwhile the A is apparently being used to point out Russian Special Forces, which is why it has rarely been seen on the front line.