A top-level security alert has been issued at every military base in Britain after a Russian TV crew was caught ‘spying’ at the UK’s secret cyber warfare HQ.

Troops have been ordered to urgently contact police if they spot a reporter and cameraman from Russia’s main state broadcaster loitering near military installations.

The dramatic and unprecedented move came after journalist Timur Siraziev was seen secretly filming close to the 25ft barbed wire perimeter fence of the 77th Brigade – a top secret Army unit that works alongside MI5, MI6 and the SAS in electronic and psychological warfare. 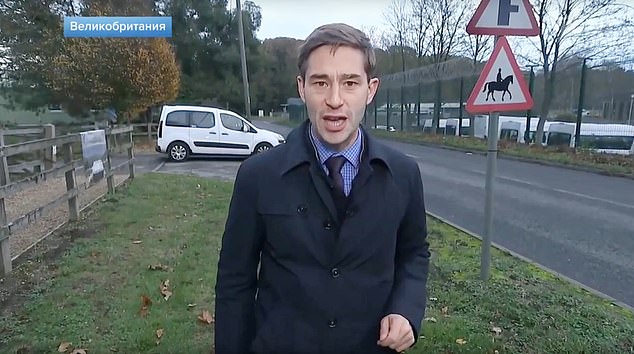 Russian TV journalist Timur Siraziev was seen filming close to the 25ft barbed wire perimeter fence of the 77th Brigade, above, in Berkshire. Channel One later broadcast Siraziev’s eight-minute report with the footage above

Security cameras at the unit’s base in Berkshire recorded Siraziev making repeated passes of the highly sensitive facility as a cameraman, understood to be Dmitry Volkov, filmed from the passenger seat of his car.

Defence Secretary Gavin Williamson has been informed of the November 21 incident while intelligence chiefs launched an immediate investigation.

Because Siraziev, 39, works for Moscow-based Putin mouthpiece Channel One, military chiefs issued an official security warning to commanders at all of Britain’s military camps. 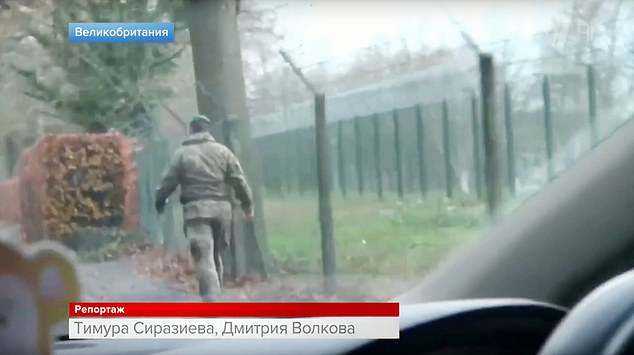 Footage from the Russian Channel One report shows the top secret cyber base. The Kremlin-funded Channel One, which boasts 250 million viewers in Russia and around the world, is widely considered as a branch of the Russian state

The alert, which has been leaked to The Mail on Sunday, is marked ‘official-sensitive’ and warns soldiers that the reporter tried to gain entry to the 77th Brigade’s heavily guarded base, Denison Barracks, which is set in dense woodland near the village of Hermitage.

It warns troops not to approach or engage in conversation with him if they are alone but to contact police immediately. British soldiers do not have the same powers of arrest as civilian police officers.

The alert also contains a passport-sized photo of the reporter taken from his media credentials and an image, caught by security cameras, of the Toyota Avensis he was driving, along with the car’s registration plates. 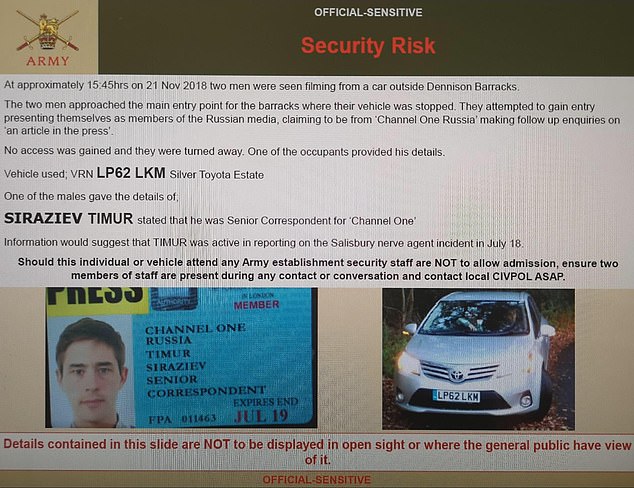 The alert, which has been leaked to The Mail on Sunday, is marked ‘official-sensitive’ and warns soldiers that the reporter tried to gain entry to the 77th Brigade’s heavily guarded base, Denison Barracks, which is set in dense woodland near the village of Hermitage

Last night, Professor Anthony Glees, director of the Centre for Security and Intelligence Studies at the University of Buckingham, said there was no doubt Siraziev and his cameraman were committing espionage and he urged British spy chiefs to pay more attention to the activities of the Russian media in this country.

He said: ‘Russian state journalists are surrogate spies for President Putin’s regime, this was deliberately targeted spying at a sensitive location and is deeply concerning. 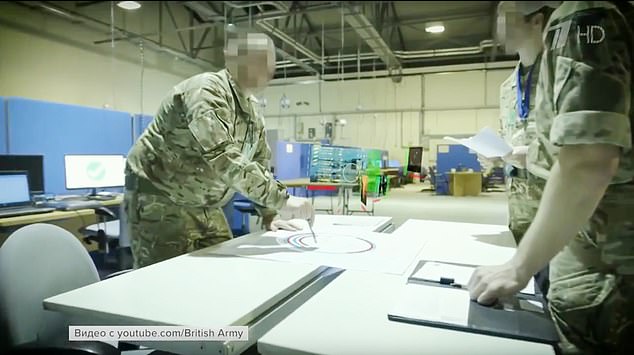 Siraziev’s report also included its own ‘fake news’ as it included footage lifted from a British Army recruiting video for a Royal Signals unit, above, and presented it to viewers as images of 77th Brigade conducting its secretive business

‘Putin is pushing this espionage. I am afraid we are back in the Cold War era when British military personnel and their families must be extremely aware of the threats in their midst.

‘Through his journalists overseas, Putin is looking for where our defences are weak, they are probing. It’s provocative behaviour, they’re spoiling for a fight and seeing how we will react.

‘The Ministry of Defence and our security services should be playing very close attention to these individuals and, as a highly sensitive unit, 77th Brigade is particularly vulnerable.’ 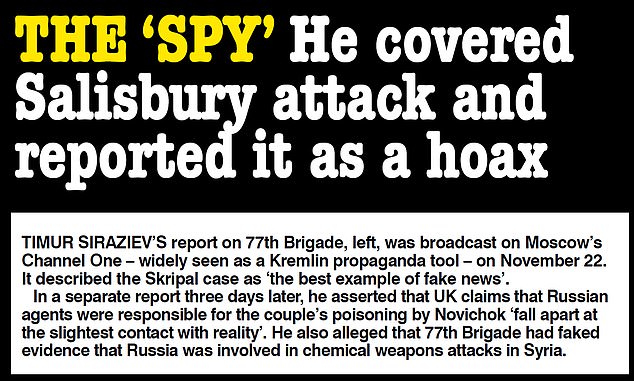 The alert comes at a time of heightened political tensions between Britain and the Kremlin following the poisoning of ex-KGB spy Sergei Skripal and his daughter Yulia in Salisbury earlier this year.

Russia has repeatedly denied overwhelming evidence that its agents were behind the attempted assassination. The Russian media has also been at the forefront of attempts to spread misinformation about the incident. Siraziev has described the UK’s case against the Kremlin as a ‘hoax’.

The Kremlin-funded Channel One, which boasts 250 million viewers in Russia and around the world, is widely considered as a branch of the Russian state and Siraziev has been its London-based bureau chief since 2008.

So how does 77th brigade operate?

Nicknamed the ‘new Chindits’ after the British and Indian force which used unorthodox tactics during the Second World War, the 77th Brigade is now a key part of many military deployments.

Among its many functions, it carries out cyber attacks on terror networks, tackles propaganda online and engages in counter-piracy and counter-insurgency activities on the dark web.

The brigade currently has small teams in the Ukraine, where they are training government forces to protect computer systems from attack. Others perform a similar role in Iraq and North Africa.

Commanded by Brigadier Chris Bell, of the Scots Guards, the 1,200-strong unit is one of the most unorthodox formations in the Army although outwardly, its HQ , hidden in the Berkshire countryside alongside a garden centre, appears unremarkable.

Many of its members are computer science graduates head-hunted to join one of three specialists teams: cyber warfare, psychological influence and information operations.

A senior source said: ‘These people are real-life Jason Bournes, operating closely with special forces, the security services and human intelligence. They bring a skillset we have not seen before.

‘Their task is to hoover up information and pick out the detail, while manipulating the enemy by digital and psychological means.

‘These people are experts in tech – they can use a phone to intercept, track and monitor other users and their skills are being used to train Special Forces about the use of their phones.’

In 2014 he received a top Russian TV industry award for his ‘professionalism and courage when performing journalistic duties’.

Days after the security alert, Channel One broadcast Siraziev’s eight-minute report on 77th Brigade, which included claims that its commanders had faked evidence in a bid to prove that Russia had committed war crimes in Syria.

He told viewers: ‘In a forest 100km [60 miles] from London, a British Army unit guards its secrets like a national treasure.

‘There is a warning on the gates: police dogs. Two fences with barbed wire along the perimeter of the base. This is the 77th Brigade of the British Army. 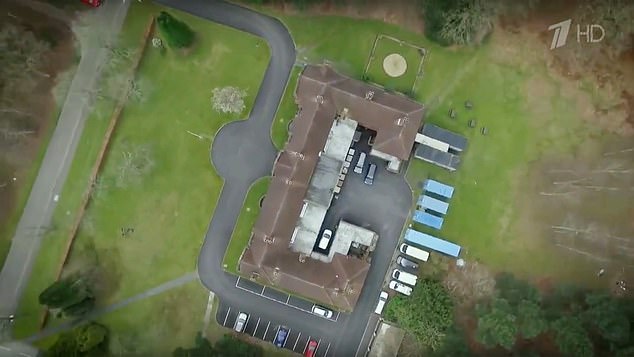 Military chiefs issued an official security warning to commanders at all of Britain’s military camps after a Russian TV crew were seen filming at the 77th Brigade’s base in Berkshire, with its aerial view above

‘Their weapons are not guns but computers and fake news instead of grenades. This unit attacks online social networks and seeds panic, hostility and hatred. Every message for social networks is being worked out like a combat operation.

‘Staged videos of chemical weapons attacks in Syria could not have been done without the British military men here.’

Siraziev’s report also included its own ‘fake news’ as it included footage lifted from a British Army recruiting video for a Royal Signals unit and presented it to viewers as images of 77th Brigade conducting its secretive business.

The Mail on Sunday understands that his reports from Salisbury after the Skripals were poisoned also raised concern among UK security chiefs. He described Anatoliy Chepiga and Alexander Mishkin, the Russian secret agents unveiled as would-be assassins, as ‘ordinary citizens’ going about their business.

Last night, former British Army commander Colonel Richard Kemp backed the MoD’s alert, saying: ‘This sort of activity is spying to all intents and purposes and it will raise deep concerns among personnel in 77th Brigade and their families that the Russians are covertly recording footage of the base and of troops going about their everyday business.

‘Operational secrecy is an imperative for 77th Brigade and, if Russian ‘journalists’ working for Kremlin backed media organisations cannot respect this requirement, perhaps they should at the very least be warned about their future conduct or more preventative action should be taken.

‘Siraziev’s track record is to package the Kremlin’s line on major foreign affairs issues as independent journalism when it is nothing of the sort.’

Defence Secretary Gavin Williamson added: ‘We take the security of our bases and personnel incredibly seriously. If a member of the public sees anyone acting suspiciously in or around a military base it should be reported to the police as a matter of urgency.

Mr Siraziev last night said that he could not speak to The Mail on Sunday on the record. 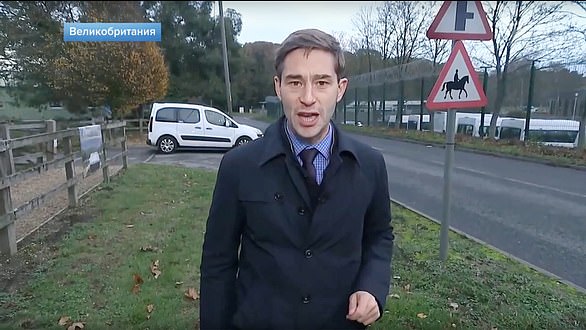 Russian TV journalist Timur Siraziev was seen filming close to the 25ft barbed wire perimeter fence of the 77th Brigade, above, in Berkshire

This image shows Timur Siraziev and his cameraman Dmitry Volkov came within yards of British soldiers at Denison Barracks.

The caption says: ‘Reporting:’ followed by Siraziev and Volkov’s names in Russian.

The pair also drove by a housing estate beside the base where families of 77th Brigade personnel live.

However, as Defence Secretary Gavin Williamson revealed to The Mail on Sunday last night, their movements were tracked throughout by security cameras.

The men will be questioned by police if they approach any other military base.