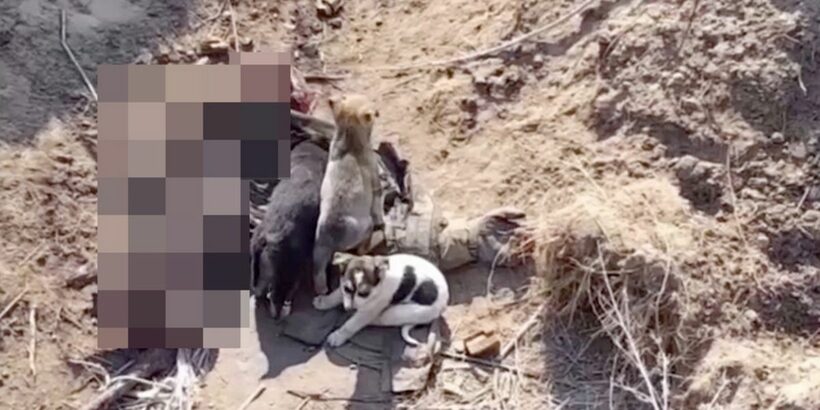 Vladimir Putin, and many around the globe, thought the war with Ukraine would be over quickly after he ordered one of the most powerful militaries in the world to suppress their smaller neighbour to the south.

However, a series of miscalculations and huge gaffes – as well as staunch Ukrainian resistance – has seen the conflict rumble on for over a month now.

A US official said on Tuesday that Putin's forces are "taking incredible losses," putting the number at over 10,000 troops.

However, reports suggest that the situation for those still battling is still bleak, with out-of-date field rations, military blunders and soldiers forced to eat dogs to survive.

Grim reports have emerged that Russian soldiers have been forced to eat dogs for meat, as have reports that dogs have been eating the remains of abandoned soldiers.

In shocking audio obtained by the Ukrainian Security Service (SSU), Russian soldiers admitted to feasting on canines. It opens with a male voice asking another man “are you eating okay at least?”

In response, the second male voice responds, “not too bad”.

He adds: “We had Alabay (dog) yesterday."

When asked “are you eating dogs or what?” the second man responds: “We have. We wanted some meat."

This prompts the first man to casually ask “why, you have nothing to eat?”.

His fellow soldier explains that while they had MREs (ready-to-eat meals) on hand, they were “sick of them”.

Earlier in the conflict, Russian soldiers bemoaned the lack of "normal food", as their rations allegedly went out of date in 2015.

In a widely shared clip, a Russian solider shows the meals, pointing at a date on the back, which appears to show the goods out of date.

"Look what are they doing, they send you to die on a foreign soil for nothing and they don't even give you normal food," the soldier complains.

And it's not just food. Medical dressings dating back to 1978 were left on the deserted battlefield in the city of Mykolaiv this week.

Worse yet, an US veteran who flew out to Ukraine to fight the Russians claims they have been leaving their dead to "be eaten by dogs."

James Vasquez said: "Russians refuse to take their dead. Their fallen soldiers are left to be eaten by stray dogs."

Indeed, this week footage emerged of three puppies gnawing away at the charred remains of a dead Russian soldier.

Speaking to the Times, he said: “It’s unpleasant to say this, but their corpses are food for stray dogs."

The Russians are also losing a lot of equipment, with a lot of it even being stolen by civilians. At the end of February a Ukrainian farmer went viral on social media after appearing to steal a Russian tank using a tractor.

The video was re-tweeted by Ukrainian MP Lesia Vasylenko, who wrote: "Scrap metal is very valuable in #Ukraine so people are very excited about all the money they can make by getting hold of enemy weapons."

And this month, two Ukrainian farmers were recorded as they used their tractors to steal a valuable Russian surface-to-air missile.

And the Russian effort was encapsulated in a clip where soldiers are seen running after a Z-marked vehicle, after being left behind in the snowy wilderness.

It was even reported that Russian soldiers are reportedly shooting themselves in the legs in order to go to hospital and avoid fighting following a collapse of morale.

A top Pentagon official said many of the soldiers "don’t understand why they’re fighting", and indeed, many admit that upon being captured by Ukrainian forces.

As well as soldier casualties, Russian generals are getting killed at an "extraordinary rate", according to the Washington Post.

Ukrainian officials say their forces have killed seven generals on the battlefield.

In all, at least 15 senior Russian commanders have been killed in the field, said Markiyan Lubkivsky, a spokesperson for the Ukraine Ministry of Defense.