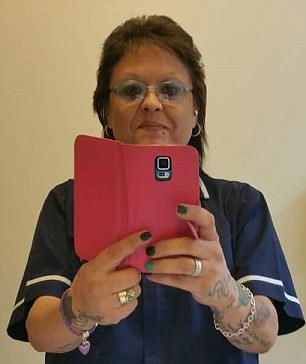 A nurse who posed for a sexy selfie as a patient lay dying nearby on Christmas Day and tried to have cocaine delivered to work has been struck off for her ‘deplorable’ behaviour.

The photo of Michelle Vaughan bending over while a man stood behind her ‘imitating a sexual position’ was posted online after she finished her shift at a nursing home on Christmas Day 2016.

Ms Vaughan claimed the compromising photo was her picking up a pen but the Nursing and Midwifery Council refused to believe her.

A disciplinary panel also heard that while she was taking the photo a resident in a nearby room was nearing death.

Just weeks later she texted a colleague asking if she could have cocaine delivered to the Tapton Grove Nursing Home in Chesterfield, Derbyshire.

The hearing was also told how other staff finally blew the whistle on Vaughan, who constantly slept on duty and posed ‘a serious risk of potential harm’ to patients due to her poor clinical practice.

It was alleged that over a three-year period between March 2014 and January 2017 the registered nurse was involved in a catalogue of incidents that eventually led to her being sacked in March last year.

A panel of the NMC’s Fitness to Practice Committee heard that Vaughan posed for the photograph in the resident’s lounge whilst she was the nurse in charge of the shift.

The incident took place on Christmas Day 2016 and the picture appeared on Facebook the next day. 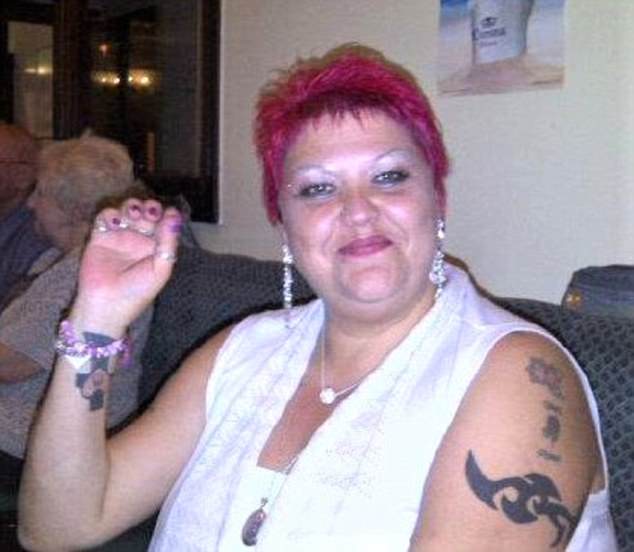 Ms Vaughan was also accused of trying to get cocaine delivered to work, sleeping on duty and offering poor care to patients

The grandmother claimed she was bending over to pick up a pen whilst the unidentified male was nearby, but the panel did not accept this.

In a report of its findings the panel said: ‘Although both Ms Vaughan and the gentleman are fully clothed in the photograph it does appear that they are imitating a sexual position.

‘The panel was of the view that this behaviour at work was inappropriate especially given the panel was informed that a resident was at the end of his life in a nearby room. In reaching its decision the panel had regard to the photograph itself and decided that it appeared posed.’

‘The panel was of the view that both Ms Vaughan and the gentleman in the photograph were looking towards the camera.’ 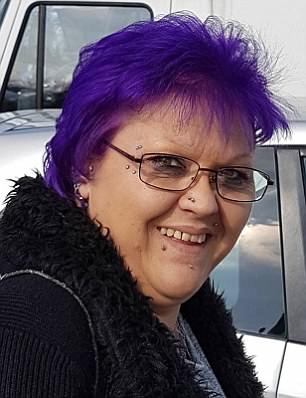 The grandmother claimed she was bending over to pick up a pen whilst the unidentified male was nearby, but the panel did not accept this.

On February 17 last year the panel was told the nurse sent text a message to a colleague in a bid to buy cocaine while on duty at the home which looks after people with severe mental health needs.

They ruled it was clear from the messages sent from Ms Vaughan’s phone while she was at work and had suggested the drugs could be delivered to her at the back door of the home, while she was on duty.

‘The panel considered that seeking to purchase illegal drugs was in itself very serious, but doing so whilst at the home, from a co-worker, with the intention of having the cocaine delivered to her at her place of work is especially grave,’ said the report.

The disciplinary panel, which heard evidence from four of Vaughan’s former colleagues, was told it was ‘well known amongst staff’ that Vaughan would sleep on duty.

‘The panel also considered sleeping whilst on duty to be a very serious matter,’ the report said.

‘It demonstrated an utter disregard for her professional duties, her colleagues and the wellbeing of residents in her care, especially considering she was the only registered nurse on shift.

‘Furthermore, it appeared she was doing so extremely frequently, at the weekends when management was absent.’

Tapton Grove has 63 bedrooms in three self-contained homes within the 12 acres of grounds providing care for men and women with ‘enduring mental health needs’.

Vaughan confirmed to the NMC that she does not wish to return to work as a nurse and is suffering from ill health.

The NMC panel struck her off and said members of the public would find her actions ‘deplorable’.

Summing up the panel said it had regard to the aggravating features that it was not ‘an isolated incident of misconduct’.

It said there had been a deteriorating pattern of behaviour and poor clinical practice spanning three years and Vaughan had shown ‘very limited remorse’ and ‘no real insight’.

It added: ‘The misconduct is very serious, the most serious was attempting to purchase Class A drugs and have them delivered to her place of work whilst on duty.’

The panel said it was unable to identify any mitigating features and noted that Vaughan had decided not to attend the proceedings.

And it concluded: ‘Ms Vaughan’s actions represented significant departures from the standards expected of a registered nurse.

‘The panel decided that the findings in this particular case demonstrate that Ms Vaughan’s actions were so serious that to allow her to continue practising would undermine public confidence in the profession and in the NMC as a regulatory body.’

Asked if she wished to comment on the details revealed to the disciplinary hearing Vaughan said: ‘No’.

Speaking at her three-bedroom former council house in Brimington, Chesterfield, she added: ‘I’m happy with their findings.’

Sun Healthcare, which operates the home, said it received an allegation of misconduct against Vaughan which had been thoroughly investigated before the decision was taken to sack the nurse.

Tapton Grove manager Sarah Chell said: ‘Action was taken to and the matter was referred the to the NMC.

‘Four members of staff attended the hearing and gave evidence. It was not a pleasant experience.

‘As nurses we have a duty of care. All allegation of misconduct are taken seriously and as nurses we are aware of our responsibilities.’