The Chancellor compared Labour to an ‘anti-vaxxers’ who refused to do what was needed to ‘heal’ UK plc.

Condemning the £400billion spending splurge being unveiled by the Opposition, Mr Javid told an audience in Manchester that the Tories would invest ‘responsibly’ in public services.

But he also warned that there was a real danger of Mr Corbyn getting the keys to Downing Street – highlighting the party’s disastrous 2017 campaign.

‘This will be a close election… We will not let Labour off the hook like last time,’ he said. 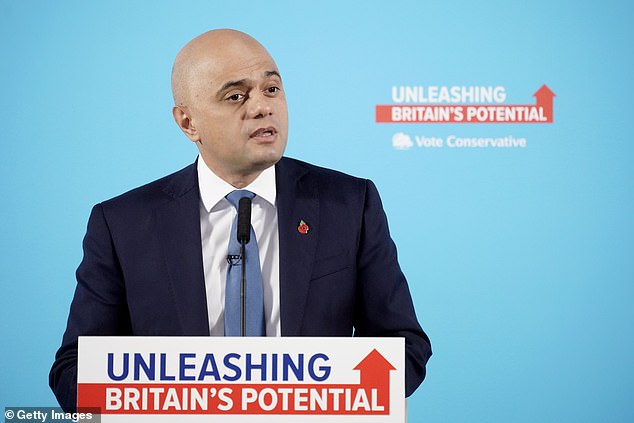 In a speech in Manchester today, Chancellor Sajid Javid compared Labour to an ‘anti-vaxxers’ who refused to do what was needed to ‘heal’ UK plc

In his speech, Mr Javid said Labour’s plans would put at risk a ‘decade of recovery’ under the Conservatives.

‘Not only did they reject the treatment needed to heal our economy and get the deficit down by four-fifths, they now want to take every step imaginable to make the country sick and unhealthy again.

‘After a decade of recovery, of difficult decisions, we can’t let Labour turn back the clock, let spending get out of control and make hardworking families pay the price.’

Mr Javid announced that the Conservatives would set out new fiscal rules in their manifesto, increasing borrowing to pay for new infrastructure.

Although the current budget for day-to-day spending will need to be balanced, up to 3 per cent of GDP will be invested in long-term projects like road and rail.

He added: ‘Today I’m announcing new fiscal rules that if elected will allow us to take advantage of the opportunity to invest in our future and our public services but without squandering the hard work of the British people.

‘Like anyone who budgets whether it’s a household or small business or large business, I know that we must keep track of what we’re spending, and what we bring in. We can’t run an overdraft forever on day-to-day spending, so I can confirm that our first rule will be to have a balanced current budget. What we spend cannot exceed what we bring in.

‘Now, while we must retain spending if we want growth to continue and get stronger in the future, then we need to invest in it. Taking the opportunity offered by those historically low borrowing rates.’

Mr Javid said the Government will borrow ‘some more to invest’ in things like hospitals and railways.

The speech echoes Mr Johnson, who launched an attack on Labour’s ‘Bolivarian revolutionary socialism’ and ‘deranged’ £196 billion re-nationalisation programme at a rally in Birmingham on Wednesday.

The Prime Minister was seeking to get the Tory campaign back on track after a chaotic start, following the resignation of Welsh Secretary Alun Cairns over his links to an aide accused of sabotaging a rape trial.

The Leader of the Commons Jacob Rees-Mogg also had to apologise after insensitive comments about the victims of the Grenfell Tower fire. 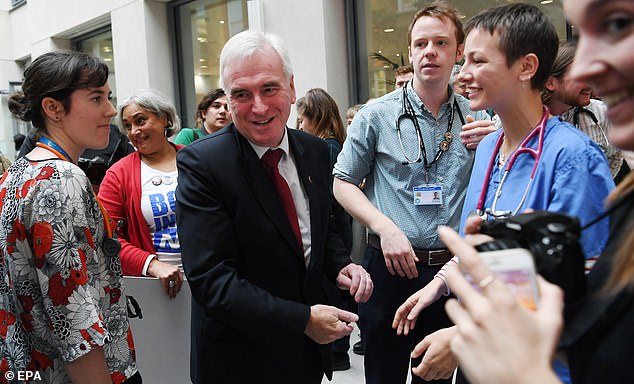