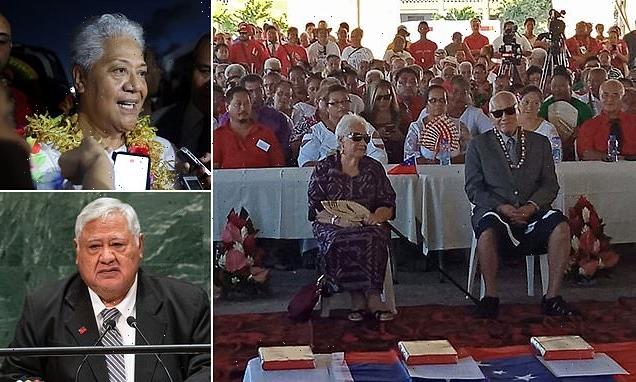 Samoa’s first female prime minister has been sworn into office during an extraordinary makeshift tent ceremony.

Fiame Naomi Mata’afa became the nation’s leader on Monday after the islands’ long-serving ruler refused to cede power and locked the doors of parliament.

The ad-hoc swearing-in is sure to face a legal challenge and will only deepen a severe political crisis in the South Pacific nation following a contested April 9 election. 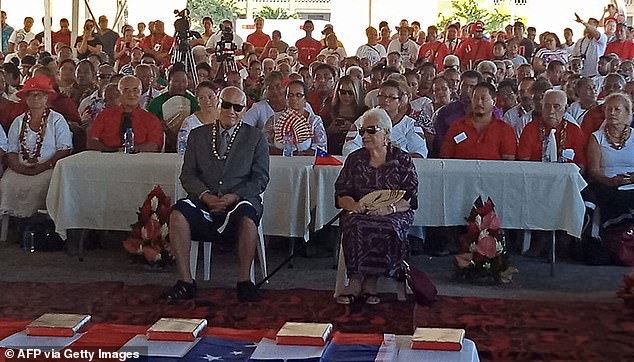 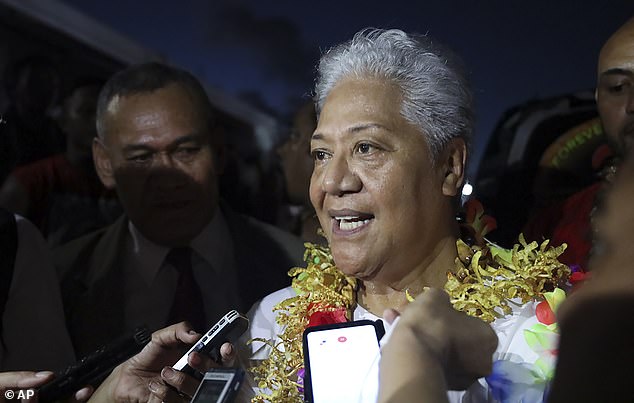 Fiame Naomi Mata’afa, pictured during the ceremony on Monday, became the nation’s leader on Monday after the islands’ long-serving ruler refused to cede power and locked the doors of parliament 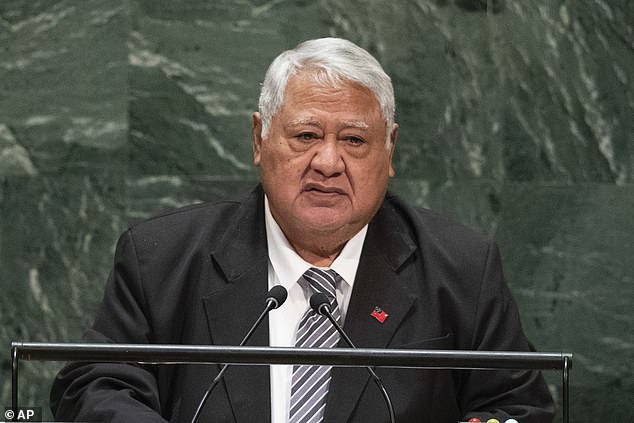 Prime minister of 22 years Tuilaepa Sailele Malielegaoi lost that vote but has so far refused to step aside, prompting allegations of a constitutional coup. Above, Malielegaoi pictured during a UN General Assembly in 2019

Prime minister of 22 years Tuilaepa Sailele Malielegaoi lost that vote but has so far refused to step aside, prompting allegations of a constitutional coup.

Mata’afa arrived for a sitting of parliament early Monday accompanied by judges in formal robes and horsehair wigs and expecting to be sworn in.

Instead, the group was barred from entering the chamber, which was locked shut by officials allied with the long-ruling prime minister.

The 64-year-old Mata’afa and elected members of her FAST Party instead huddled in an open-sided marquee on parliament’s gardens, as supporters sang and fanned themselves in the Pacific heat and police looked on.

Hours later there were raucous scenes as Mata’afa’s cabinet was sworn in one-by-one, in a ceremony that had all the trappings of officialdom but which was quickly rejected by rivals. 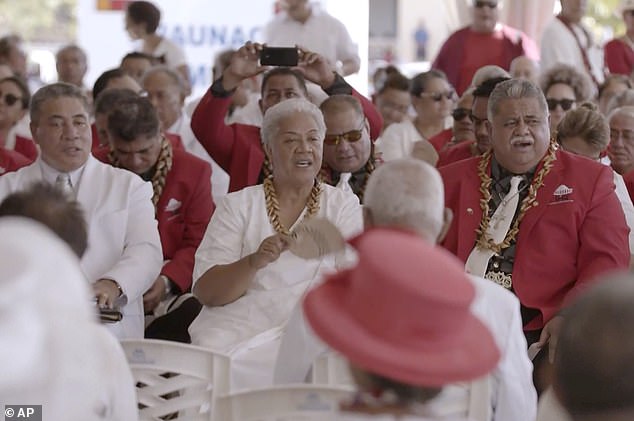 Prime Minister-elect Fiame Naomi Mata’afa, centre, during the ceremony on Monday in Apia. Samoa was plunged into a constitutional crisis Monday when Mata’afa, who won an election last month, was locked out of Parliament and the previous leader claimed he remained in charge 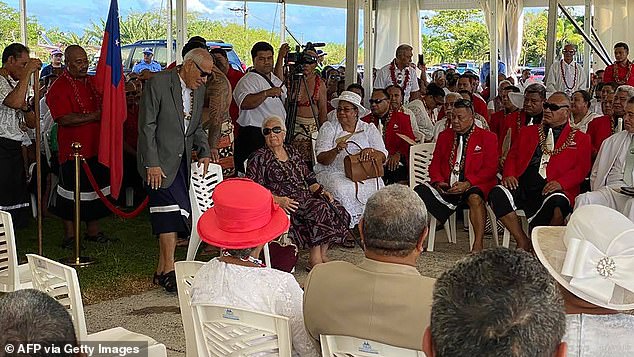 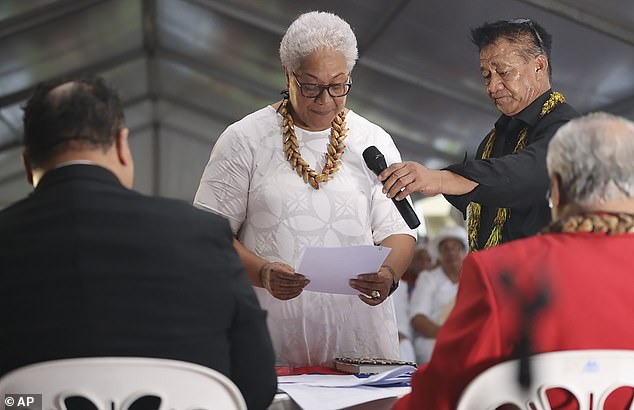 The loudest cheer was reserved for the leader herself who raised her hands in triumph in the light of the setting sun.

‘Democracy must prevail, always. There can be no exceptions from this fundamental principle,’ a party statement said. ‘Those who claim otherwise and act accordingly play with fire.’

After the ceremony veteran leader Malielegaoi continued to insist he remained prime minister, despite the courts backing Mata’afa’s claim, setting the stage for continued political struggle.

He described the swearing in ceremony as ‘illegal and unlawful’.

‘I was shocked, not one of them, not even the church ministers present had the guts to tell them that’s illegal,’ he told reporters. 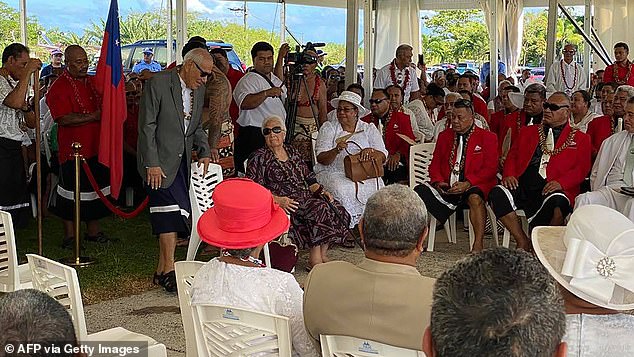 Members of the judiciary parliament wait near parliament in Apia on May 24, 2021, after they were locked out of the Pacific nation’s parliament as her political rival refused to accept electoral defeat prompting claims of a coup 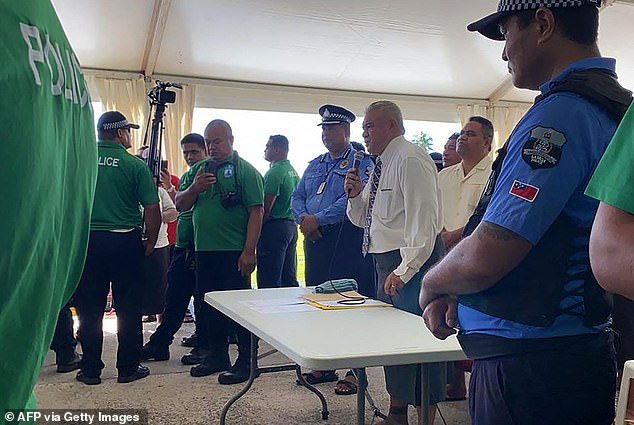 ‘I didn’t think we had people like this in Samoa, I thought the mafia was only found in Italy.’

Malielegaoi has been accused of threatening Samoa’s young democracy and carrying out a coup.

‘This is an illegal takeover of government, that’s what coups are,’ Mata’afa told New Zealand’s Newshub on Sunday.

‘We have to fight this because we want to retain this country as a country that is democratically ruled, premised on the rule of law.’

Samoa does not have a military and the police force has stressed it is ‘apolitical’, pledging to uphold the rule of law and ensure the safety of all Samoans.

Concerned, neighbouring New Zealand and Australia have urged calm and adherence to the rule of law.

New Zealand Prime Minister Jacinda Ardern said Samoa was at a ‘difficult crossroads’ and indicated Wellington would recognise whatever side was recognised by the judiciary, currently Mata’afa.

‘When you have the judiciary and the Supreme Court endorsing a particular outcome, then that would be where New Zealand would naturally flow,’ she told reporters. 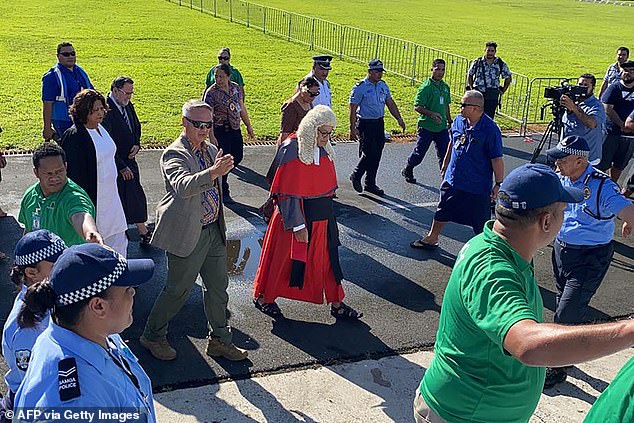 Samoa’s Chief Justice Satiu Simativa Perese arrives at parliament in Apia on May 24, as he and Samoa’s prime minister-elect Fiame Naomi Mata’afa were locked out of the Pacific nation’s parliament as Mata’afa’s political rival refused to accept electoral defeat prompting claims of a coup 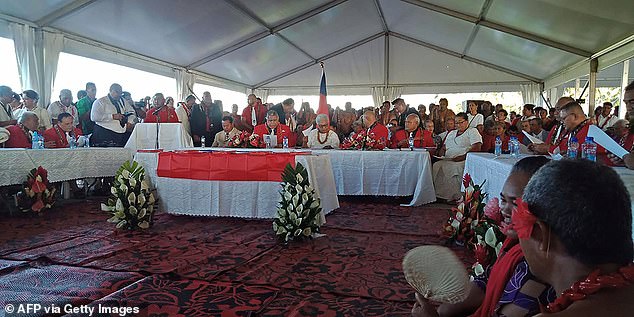 Samoa gained independence in 1962 after nearly 50 years as a New Zealand protectorate and the incumbent Human Rights Protection Party has been in power since 1982, apart from a brief coalition period in 1986-87.

It has always enjoyed huge parliamentary majorities but Mata’afa’s FAST Party came from nowhere after its formation in mid-2020 to claim 26 of the legislature’s 51 seats in last month’s vote.

Mata’afa served as Malielegaoi’s deputy until she resigned last year, accusing him of overstepping his authority after so long in power.

There is no love lost between the pair, with Malielegaoi calling Mata’afa ‘the devil’ during parliamentary debate and labelling her a traitor after the election.

Mata’afa’s family are part of the Tama-a-‘aiga – Samoa’s royal lineage – and have been steeped in the island nation’s political life for generations.

Her grandfather helped draft Samoa’s constitution and her father was the nation’s first prime minister after independence.

She has put women front and centre in a region where politics has traditionally been a male preserve.

Hilda Heine of the Marshall Islands is still the only woman to have led a Pacific island nation, serving as president from 2016-20.

Mata’afa has previously been critical of Beijing’s policies in the region and has called into question a major Chinese port project in the island nation.

She has also called out Australia for allegedly taking a ‘patronising’ attitude to its Pacific neighbours at times.