A plan by billionaire Lindsay Fox to claim more foreshore land in front of his Portsea mansion could be thwarted by a council report that found the dredging of Port Phillip Bay between 2008 and 2009 contributed to the significant build-up of sand along Point King beach.

The peer-reviewed report delivers a major blow to Fox’s ambition to further expand his Portsea compound, which relies on a common law right known as the “doctrine of accretion”.

Under the centuries-old legal principle adopted from English law, coastal landowners are allowed to amend property boundaries affected by natural rather than man-made changes to the foreshore.

However, mounting evidence, including a report commissioned by the Mornington Peninsula Shire council last year, suggests the channel-deepening project played a direct role in the pronounced shift in the high-water mark at Point King, while also contributing to serious erosion at nearby Point Nepean and Portsea front beaches.

If definitive proof is able to connect the channel-deepening project to coastal changes, then the doctrine of accretion would not apply to Fox’s claim.

The emerging link raises concerns about a decision by the Victorian land titles office on Christmas Eve 2013 to extend Fox’s property line down the beach by approximately 45 metres, which increased the value of the family’s cliff-top estate by about $5 million.

In June 2020, Fox again applied to the Victorian land titles office to realign the boundary, claiming the natural build-up of sand entitled him to a larger share of the beach. If approved, the proposed amendment would expand his holding by as much as 70 metres towards the waterline.

The claim, which is still pending, has angered many residents and businesses who are now considering legal action against the Andrews government over the extensive erosion at other beaches in Portsea.

According to the recent report by environmental consultancy firm Water Technology, most of the coastal damage occurred immediately after the $720 million channel-deepening project which was overseen by the Port of Melbourne Corporation.

“The erosion at Portsea is considered to be caused by increased swell wave heights due to increased internal reflections trapping more swell waves along the south side of the shipping channel following the channel-deepening project in 2008 and 2009,” the report states. 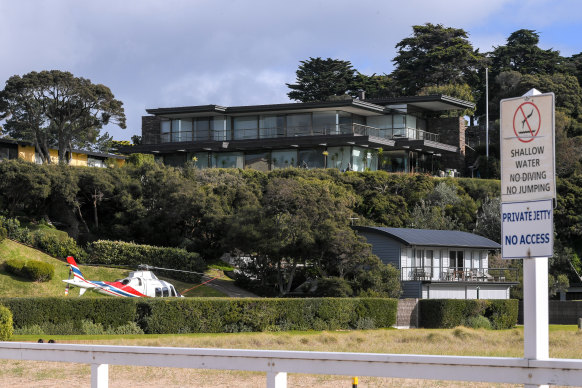 The report, which was peer reviewed by international coastal engineering expert Dr Ida Broker, reveals that “man-made” processes caused the accumulation of about 50,000 cubic metres of sand at Point King and Shelly beaches

“This erosion has not occurred in isolation. Since 2009, there has been significant erosion along Point Nepean Beach to the west, and significant accretion along Shelley Beach and Point King Beach to the east,” the report by Water Technology states.

The Nepean Ratepayers Association, which represents more than 360 Mornington Peninsula locals, obtained the report from the council under freedom of information laws and has engaged Sydney-based law firm Beatty Hughes and Associates.

The group, via its lawyer, raised concerns with Environment Minister Lily D’Ambrosio last month and has urged the government to consider a range of measures to stop further erosion and repair the affected beaches, according to correspondence obtained by The Sunday Age.

The proposals to restore the damaged coastline include the construction of a 100-metre groyne at the eastern end of Portsea front beach, and an offshore breakwater or further dredging to deflect waves from the affected areas.

The association has also urged the Victorian land titles office to reject the pending application by the Fox family to further expand the boundaries of its Point King estate.

“The evidence is now overwhelming of the link between the bay dredging project, loss of the Portsea beach and transfer of sand to the Point King beach,” the association’s president, Colin Watson, said in a letter to the department on September 26.

“The two pending applications in the Office of Titles cannot now possibly succeed.” 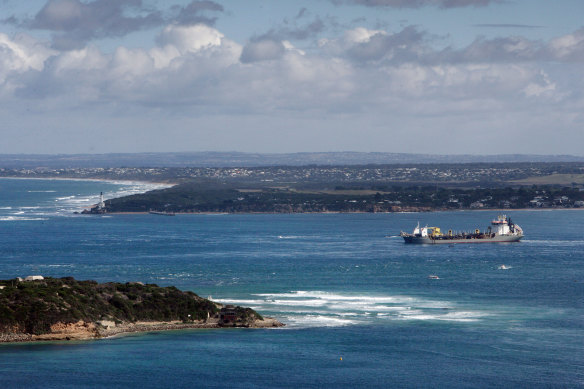 The Queen of the Netherlands dredging the Port Phillip shipping channels in 2008.Credit:Rebecca Hallas

The Water Technology report provided to council in February is not the first study to draw a link between the channel-deepening project and erosion damage along the Portsea coastline.

The Department of Environment and Primary Industries commissioned research from the same consultancy firm in 2013, which found that wave energy had been redistributed along the Mornington Peninsula following the completion of the project in December 2009.

The department commissioned a second study from the CSIRO, which also found that dredging contributed to larger and more powerful swells at the southern end of the peninsula.

The report said that a definitive cause would be difficult to establish because of the “absence of long wave records at Portsea beach that pre-date the erosion event and channel-deepening project”.

But research conducted by engineering services company Cardno, commissioned on behalf of the Fox family, found no definitive link between channel deepening and the dramatic changes to Portsea’s coastline.

Cardno’s report did concede that “recent changes east of Point Franklin (Shelly and Point King beaches) are larger than any previously recorded”.

“There have been suggestions that the dredging associated with the channel-deepening project in Port Phillip Heads and South Channel may be responsible, although no mechanism has been demonstrated,” the Cardno report stated. 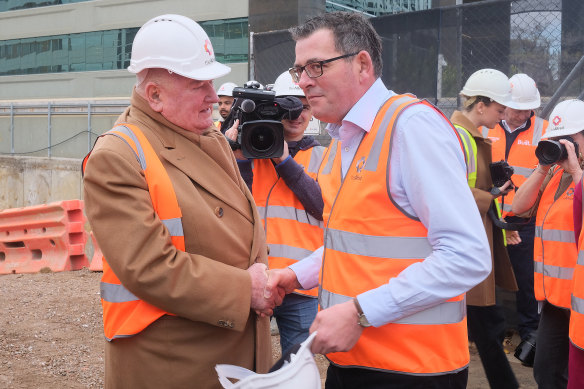 The same research found that “since 2009, the shoreline has moved seaward through accretion at an average rate of 5.8 metres per year”.

A spokesman for the Fox family declined to comment on the latest report by Water Technology, or its potential impact on the pending application for a boundary realignment.

Last year, Fox lost a case against the planning minister in the Supreme Court of Victoria that would have allowed him to develop part of the beach he successfully claimed as his own in 2013.

The legal challenge followed a decision in 2014 by then Liberal planning minister Matthew Guy, to change planning rules that rezoned any land acquired because of accretion from residential to “public conservation and resource”.

The amendment restricted what Fox could do on the foreshore land he gained in 2013, and would apply to any future realignment of his boundary.

The trucking magnate has insisted for more than two decades that his property line extended across the Point King beach to the margin of Port Phillip Bay.

Over this time, he has installed bollards, a lawn, trees, hedges and security cameras to protect his boundary.

In 2000, he told The Age he would never stop fighting for what was rightfully his: “As far as I’m concerned, what’s mine is mine and I will fight for it all the way. I will not stop.”

A state government spokesperson said the science behind the changes to Portsea’s beaches was not settled.

“Erosion is a naturally occurring process,” the spokesperson said. “The 2013 CSIRO report … found it was not possible to attribute erosion at Portsea to a single factor.”