The BBC’s Christmas gift to working mums? More like a kick in the groin! SARAH VINE on the Beeb’s ‘feelgood’ festive trailer that’s left women fuming

Christmas is billed as the most magical time of year. But the truth is that for most of us, it’s merely the most stressful.

It’s not just the vast sums of money involved, or the absurd expectations of domestic goddessery (hand-knitted mince pies, anyone), or the fact that the whole sodding thing seems to start in August.

It’s the way that lately every ounce of (in my opinion very healthy) cynicism has been stripped from this overblown festival of greed and opportunism — and replaced by a moronic kind of mawkishness.

Witness the rise and rise of the schmaltzy, over-emotional, tugging-at-the-heartstrings Christmas TV advert.

Whether via a trampolining dog (John Lewis 2016), a weepy orangutan (Iceland 2018), Moz the monster (John Lewis 2017), the man on the moon (John Lewis 2015) — or any of the countless other sponsored messages designed to make us feel sad/guilty/soppy so we’ll part more easily with our cash — there is no escaping the overflowing of sentiment at Christmas.

The one place you used to be able to avoid this clap-trap was, of course, the BBC, owing to the merciful lack of advertising.

But now the rot seems to have spread even to Auntie, who has just released its own heart-wrenching Christmas message — and it’s a real man-size-tissues one.

A stressed-out working mother buzzes around the breakfast table, one ear on the phone to the office, only dimly aware of her teenage son, who is trying to get her attention.

In frustration, he sends her a text message: the only way to reach his busy mother. Is she ‘coming tonight’ (to see the Christmas lights switched on).

She doesn’t know: she has a lot on her plate, she’ll see. 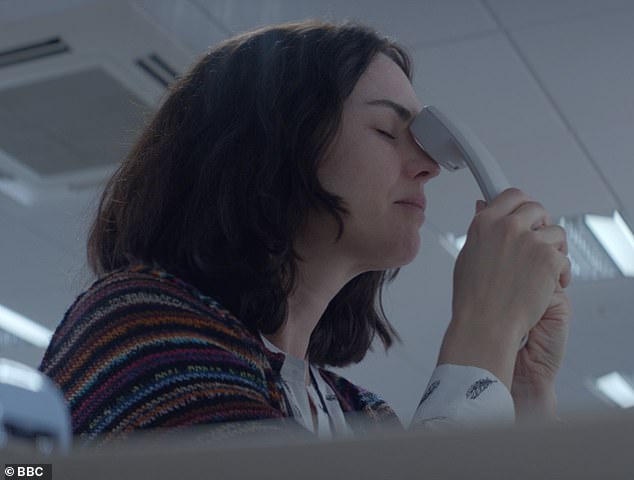 Later, in the office, work is a nightmare. We see her at her desk, struggling to cope with some crisis or other.

Meanwhile, her son is down at the amusement arcade, furiously playing on the machines, venting his frustration with violent video-games.

Then, suddenly, her computer freezes, his console crashes — and the world stops.

She has an epiphany. To a dreamy, drippy soundtrack of a song called Lost In You, we see mother and son reunited at a funfair, interacting meaningfully while everything around them remains frozen in time.

They sit on a bench eating candyfloss, gazing at each other like lovestruck teenagers. Then the spell is broken, and life goes back to normal.

The intended message, of course, is about family togetherness.

How Christmas is a time to stop and take stock of the world around us, to ‘reach out’ to those we love and generally count our blessings, to spend time with family in a way we don’t normally do.

Fair enough, I suppose. Although in my family that sort of behaviour generally leads to trouble, especially if there’s alcoholic refreshment involved.

But if the BBC wants to make us all play happy families who am I to criticise. Save for one thing: why the anti-feminist tilt?

Because let’s be honest here, the real message of this advert is not peace and goodwill to all mankind; it’s woman, know thy place.

Essentially, this is a story of a working mother who is ruining her teenage son’s Christmas by having a job and a life of her own.

Now I’m sure that was very far from the intention when this little film was conceived and commissioned.

No doubt the Beeb just wanted something that would strike a chord in the public’s imagination, and resonate with the viewers. 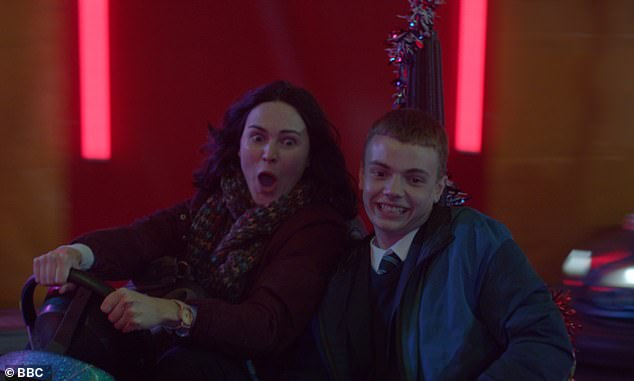 It is inconceivable that the BBC, an institution so self-consciously woke and so painfully PC, would have deliberately set out to offend working mothers. But there’s no getting away from it: this advert makes us out to be witches.

No wonder there has been a furious backlash on Twitter and parenting forum mumsnet.

One horrified mother tweeted: ‘I can’t believe they’re playing on the guilt of working mothers.’ Another, dubbed it ‘totally offensive.’

Look again at that opening scene, at the poor exasperated husband at the kitchen table; look at the sad yet handsome teenager; look at his younger sibling, sniffling in the background.

Aahhh. Don’t they just break your heart? All miserable because the bad, mean, selfish woman in their lives, instead of being all trussed up in a pinny and dancing attendance on them, dares to have a career.

Who knows, in her selfishness she may even be slaving extra hard to pay the bills and buy them all the no doubt eye-wateringly expensive electronic gadgets they’ve asked Father Christmas for.

Or maybe she’s just trying to set aside some money for her son’s university, or pay for the little one’s nursery.

God forbid that anyone should actually be grateful for the hours she puts in, for the way she somehow manages to run the home while also holding down a job.

Because none of that matters: she’s not at the beck and call of her child. She is therefore a Bad Mother, a woman who has lost sight of the only thing that matters in her life: her family.

That she is, in some fundamental and visceral way, going against her nature to the detriment of those she loves.

Not, as I was always taught, setting an example, pulling her weight, even (God forbid) gaining fulfilment. No, just making everyone, including herself, miserable.

And the fact that no one at the BBC spotted this inference tells you everything you need to know about how the Corporation feels about women in the workforce — ironically in the year when it took up an awful lot of air-time navel-gazing at its gender pay-gap and loudly virtue-signalling its intention to change.

Because for all its tokenism, what this suggests to me is that not only does it fail to really understand us; it disapproves of us.

Christmas is a time when women — especially those of us who have dependent children and jobs (almost five million mothers) — feel under intolerable pressure.

It still falls to us to make Christmas perfect — as TV, advertising and the internet never tire of telling us — and yet there are only so many hours in the day.

We have to juggle the demands of work — which inevitably gets more hectic in the lead-up to the dreaded day — with the increased demands of school (plays, recitals, carol services, costumes, charity sales, I could go on), and the imminent arrival of relatives.

Not forgetting the sending of cards, buying of gifts, wrapping, tree decorating, cooking, cleaning — and myriad other claims on our time.

A little bit of encouragement and support might be nice, maybe even a dash of acknowledgment.

In fact, a much more realistic — and just as heart-warming scenario — might involve a madly stressed-out working mother whose teenage son, realising the pressure she is under, instead of smashing up the local amusement arcade because he failed to get his way, goes straight home after school, puts a wash on, unloads the dishwasher and makes both of them dinner.

I can just picture it now: the pair of them laughing over a plate of burnt chips, half-raw sausages and overcooked peas — and sharing a pizza instead.

But no: the BBC decides instead to broadcast the televisual equivalent of a knee in the groin: the Working Mother’s Nightmare Before Christmas.

Because, of course, the scenario being played out in this film is all our worst fears writ large.

All working mothers beat themselves up about not spending enough time with their children, not being sufficiently ‘present’ or tuned in emotionally.

But, unlike the mother in the film, not all of us can magically make time stand still, sweep aside work commitments and responsibilities, and take the afternoon off to play dodgems with our son.

It’s manipulative and malicious. And above all, it’s not Christmas.