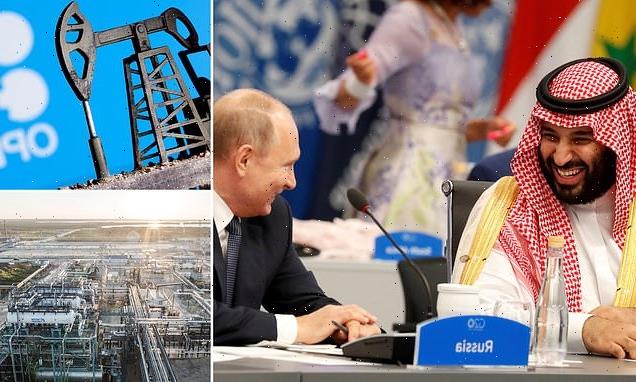 Saudi Arabia and Russia are expected today to agree to a major cut in oil production to cause a huge price surge.

The 13-nation OPEC cartel and its 10 Russian-led allies of oil-exporting countries will debate a cut of up to two million barrels a day it ships to the global economy.

It would also further aggravate inflation which has reached decades-high levels in many countries and is contributing to a global economic slowdown.

‘With consumers only just breathing a sigh of relief after being forced to pay record prices at the pump, today’s cut is not going to go down well,’ said Craig Erlam, an analyst at trading platform OANDA. 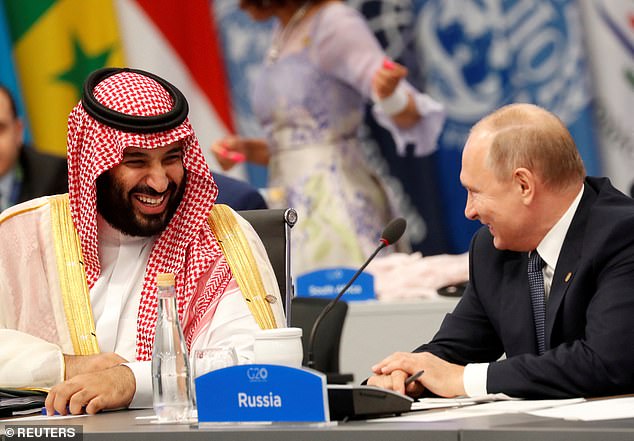 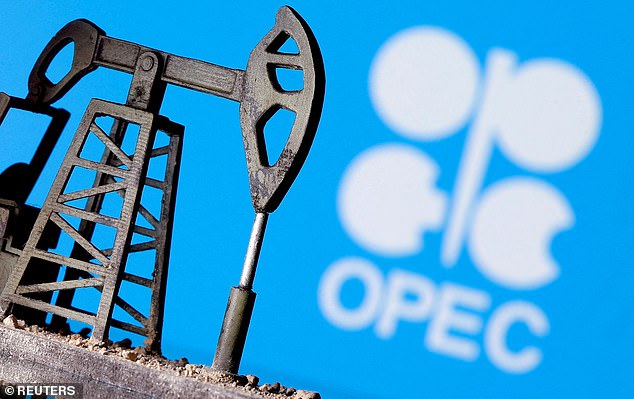 Energy ministers from the OPEC cartel, whose leading member is Saudi Arabia, and allied non-members including Russia are meeting in person at the group’s Vienna headquarters for the first time since early 2020 at the start of the pandemic.

A production cut could benefit Russia by establishing higher prices ahead of a European Union ban on most Russian oil imports, a sanction over the invasion of Ukraine that takes effect at the end of the year, analysts at Commerzbank say.

Russia ‘will need to find new buyers for its oil when the EU embargo comes into force in early December and will presumably have to make further price concessions to do so,’ they wrote in an analyst note.

Moscow also faces a separate push by the US and the other Group of Seven wealthy democracies to impose a price cap on Russian oil by December 5.

Oil prices surged this summer as markets worried about the loss of Russian supplies from sanctions over the war in Ukraine, but they slipped as fears about recessions in major economies and China’s COVID-19 restrictions weighed on demand for crude. 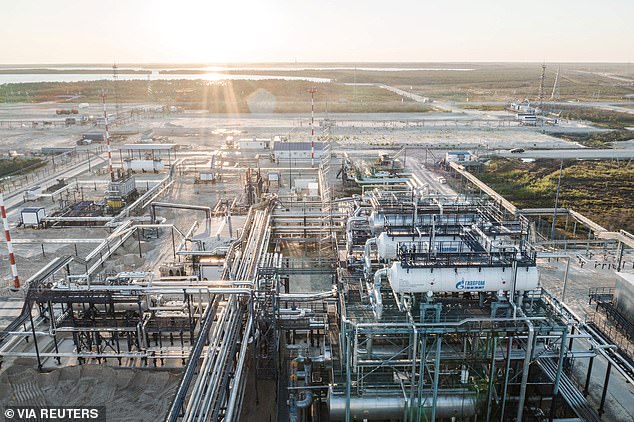 The fall in oil prices has been a boon to US drivers, who saw lower gasoline prices at the pump before costs recently started ticking up, and for President Joe Biden as his Democratic Party gears up for congressional elections next month.

It’s unclear how much impact a production cut would have on oil prices – and thus gasoline prices – because members are already unable to meet the quotas set by OPEC+.

Yet Saudi Arabia may be unwilling to strain its relationship with Russia even if the world’s largest oil exporter had any reservations about cutbacks and has recently has drawn leaders from Biden to German Chancellor Olaf Scholz to talk about energy supplies.

The Commerzbank analysts said a small trim would likely see oil prices fall further, while the group would need to remove at least 500,000 barrels day from the market to bolster prices. 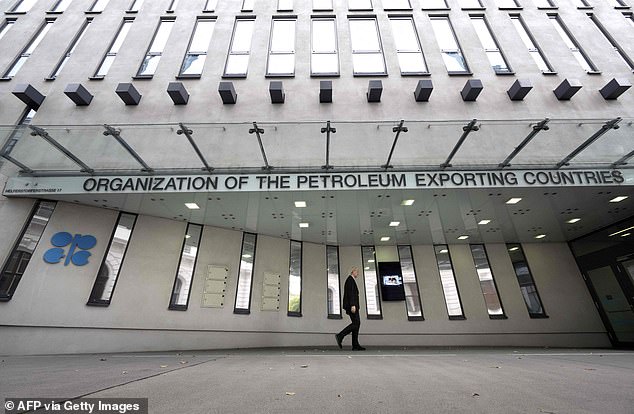 Such a production cut ‘would undoubtedly signal to the market the determination and resolve of the cartel to support oil prices,’ said UniCredit economist Edoardo Campanella. But supply would drop by less than announced.

‘If the group cuts target production by 1 million barrels per day, actual output would likely drop by about 550,000 barrels per day – as countries like Russia or Nigeria that are producing below quota would see their formal target decline but remaining above what they can currently produce,’ Campanella said.

At its last meeting in September, the group reduced the amount of oil it produces by 100,000 barrels a day in October. That token cut didn’t do much to boost lower oil prices, but it put markets on notice that OPEC+ was willing to act if prices kept falling.

International benchmark Brent has sagged as low as $84 in recent days after spending most of the the summer months over $100 per barrel. U.S. oil prices fell below $80 per barrel Friday. Ahead of the meeting, U.S. crude traded at $86.38 and Brent at $91.66. 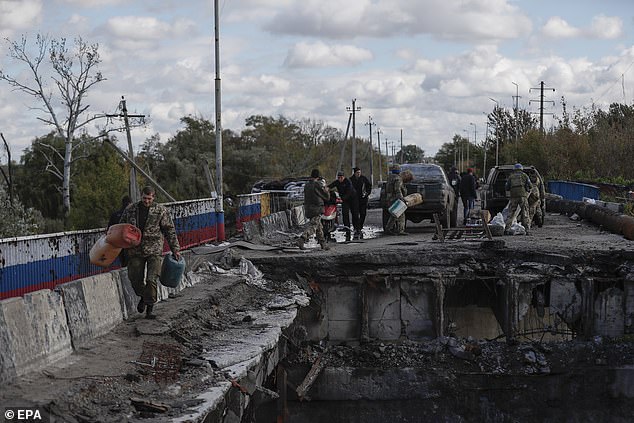 Putin is hoping that the pressure he is exerting on the markets will divide the West in its support for Ukraine, before he suffers any further military embarrassments.  Pictured: Ukrainian soldiers carrying supplies across a damaged bridge into the newly liberated city of Kupiansk, east of Kharkiv, Ukraine, October 3

The White House declined to comment before OPEC leaders made a final decision on oil production, but press secretary Karine Jean-Pierre told reporters Tuesday that the U.S. would not extend releases from its strategic reserve to increase global supplies.

Biden has tried to receive credit for gasoline prices falling from their average June peak of $5.02 – with administration officials highlighting a late March announcement that a million barrels a day would be released from the strategic reserve for six months. High inflation is a fundamental drag on Biden’s approval and has dampened Democrats’ chances in the midterm elections.

Gasoline prices recently turned up because of refinery outages in California and Ohio, and vary widely, from over $6 per gallon in California to under $3 in some parts of Texas and the Gulf Coast, according to motoring club federation AAA. The national average of $3.80 is up slightly but down from a record high on June 14.

One major factor weighing on oil prices has been fears of recessions in places like the U.S. and Europe and slowdowns due to China’s strict COVID-19 measures.

Which nations make up the Organization of the Petroleum Exporting Countries (OPEC)?

The Organization of the Petroleum Exporting Countries (OPEC) consists of 13 member nations, while OPEC+ has an additional 11 member countries. Between them, they have huge control over the globe’s oil market and prices.

As of September 2018, the 13 OPEC members accounted for an estimated 44 percent of global oil production, and 81.5 percent of the world’s proven oil reserved. The group can manipulate oil prices by setting production targets. Generally speaking, when targets are reduced, oil prices increase.

Some analysts have characterised OPEC as an example of a cartel that corporates in market competition, while being protected by state immunity.

OPEC+ was formed in 2016, bringing 11 more nations into the fold – including Russia – giving the group even more control over the global oil market.

Here are the member nations that make up OPEC and OPEC+: