Aden: Houthi forces fought to keep control of the airport in Yemen's main port city of Hodeidah on Sunday as Saudi-led coalition air strikes struck the compound, in an offensive that could be a turning point in the three-year conflict.

Losing Hodeidah would deal a serious blow to the Iran-aligned Houthis, cutting supply lines from the Red Sea to their stronghold in the capital Sanaa. 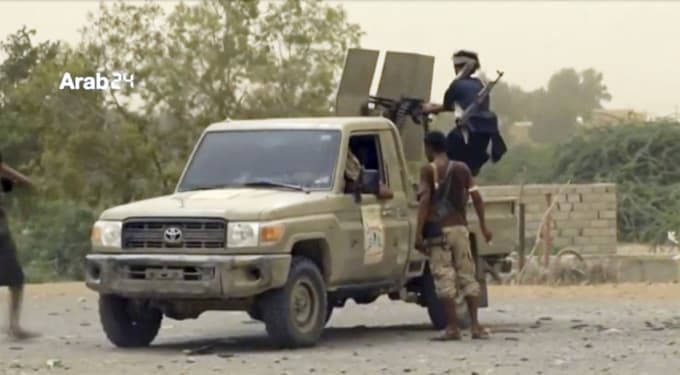 Saudi-led forces near the airport in the port city of Hodeida.

It could also give an edge to the Western-backed military alliance which, despite superior weaponry and firepower, has failed to defeat the Houthis in a war that has killed 10,000 people and created the world's most urgent humanitarian crisis.

"Coalition airplanes carried out more than 20 raids until now and shook the city," resident Akram Yihya said by telephone. "We can clearly hear fighting and missiles landing in an area near the airport."

About 20,000 troops, mostly Yemenis from various factions led by United Arab Emirates forces and backed by warplanes and Apache attack helicopters, have been fighting to dislodge the Houthis since 2015.

The coalition wants to restore an internationally recognised government in exile and thwart what Riyadh and Abu Dhabi believe are arch-foe Iran's ambitions to dominate the region.

As air raids pounded Houthi fortifications in the airport, Houthi fighters blocked the main road from Hodeidah to Sanaa with mounds of earth and chunks of asphalt to prevent coalition troops from advancing.

"The air strikes and missiles are shaking the city's houses," said resident Khaled Sharaf. People living near the airport said bullets were hitting their homes as fighting raged.

The battle for Hodeidah could drag on, creating more suffering for civilians who have already endured air strikes, port blockades, hunger and a cholera epidemic.

The offensive could also have ramifications further afield due to Yemen's role in a proxy war between Saudi Arabia and Iran that has fuelled instability across the Middle East.

US President Donald Trump's withdrawal from Iran's nuclear deal and his embrace of nuclear state North Korea have added to Tehran's isolation and put pressure on the Islamic Republic to preserve its interests in Yemen and other Arab states.

The Houthis, mountain fighters who seized Sanaa in 2014, gained valuable experience in a series of guerrilla wars with Yemen's national army and a brief border war with Saudi Arabia.

Armed mostly with AK-47 assault rifles, they have advanced on sandal-shod feet and by pickup trucks in battles across Yemen, one of the world's poorest countries.

That may give them an advantage in street-to street combat if fighting extends to the densely populated neighbourhoods of Hodeidah, a city home to around 600,000 people.

Riyadh has accused the Houthis of using Hodeidah port to smuggle Iranian-made weapons, including missiles used to target Saudi cities – accusations denied by the group and Tehran.

On a road overlooking the desert outside of Hodeidah, Yemeni members of the coalition piled into pickup trucks, their cheeks bulging with the mild narcotic plant qat, to form a convoy.

Others walked past armoured vehicles and took up positions in the sand. One casually fired mortar bombs into the distance.

Houthis rule the most populous areas of Yemen, a chronically unstable country, where many parties have been competing in a messy civil war, from loyalists of the late President Ali Abdullah Saleh to southern separatists to al-Qaeda.

The United Nations says the assault on Hodeidah could trigger a famine imperilling millions of lives. Many residents are bracing for more hardship as the warring sides dig in.

The meagre income that Yehia Sohail generated with occasional work at Hodeidah’s port could soon vanish.

"I take the money to cover the needs of one day and that’s it, it’s done," he said, speaking outside his shack, built from corrugated metal, palm fronds and torn blankets.

"Now if the port closes, where will I go to work? When this siege comes and this disaster happens, where am I going to find work?"

His wife, Um Ahmed, said the family had no cooking gas. A motorcycle, their only means of transportation, had broken down. Sometimes strong rains and wind batter their tiny home.

"I have a young daughter who’s exhausted and sick and we can’t get her medication or anything, only the necessary food. If a war happens, what are we going to do?" she said.