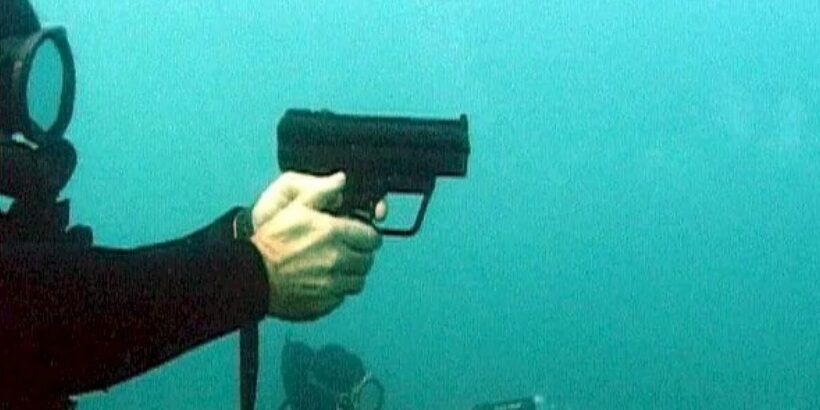 Special Boat Service frogmen have been issued with a pistol which can kill enemy divers ­underwater from more than 30m.

It is believed to be the first time that British special forces have been equipped with such a weapon.

The virtually-silent Heckler and Koch P11 pistol can also be used to take out hostile forces above water.

During one counter-terrorist reconnaissance mission in Syria a four-man SBS team fired the weapon, right, after stealthily emerging from the water.

A source said: “The frogmen were just moving out of a river and climbing up a bank when they came across two Islamic State sentries guarding an oil refinery.

“Both were taken out with the P11. One of the guards was shot in the chest, the other was killed with a head shot. It was the first time the SBS ­frogman had used the weapon on a real operation.

“He was very impressed and said that the only sound came from the dart hitting the sentry in the face.”

The pistol was originally designed for the German special forces but has been redeveloped for use in covert ­maritime operations.

The rounds are fired using an ­electric power pack in the pistol, ­making the weapon silent and flashless – perfect for the special forces.

The pistol has five barrels and each fires a 7.62mm tungsten dart, as bullets would slow down too quickly underwater and would be useless over any distance of more than a couple of metres.

A military source said: “Frogmen need a close-protection weapon, something more than a knife – and the P11 is ideal.

“Weapons can be waterproofed but it’s not always successful.

“The PK11 is perfect for the job. Its main limitation is that it takes ages to reload so once the five rounds have been fired, it is effectively useless.”

Defence sources said the weapon has been used on several operations.