Primary school forces children who forget their lunch money to eat bread, fruit and water and segregates them from the other pupils

A primary school has been blasted by parents after it emerged pupils are sat in ‘segregation’ and given bread and water if their parents fall into lunch money arrears.

Parents have reacted angrily to the ‘outrageous’ and ‘Dickensian’ decision by Mount Pleasant Primary School in Shrewsbury, over any child who falls into more than £6.60 debt – or the cost of three school meals.

A newsletter sent home to parents warned if this is the case they will be offered bread, water and fruit.

‘Dinners should be paid in advance either on a daily or weekly basis’. 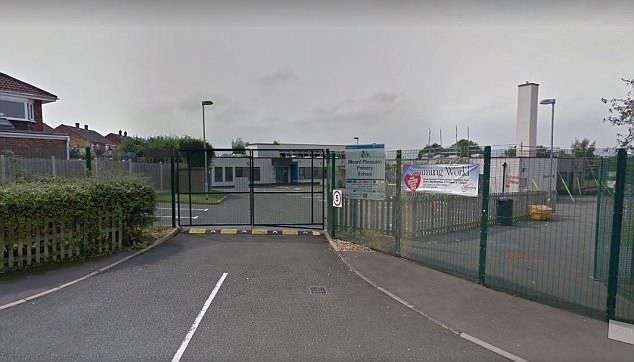 The letter sent home in May states: ‘Unfortunately, if dinner arrears exceed £6.60 or more we will be unable to serve a lunch but request sandwiches are brought in, otherwise we will only be able to offer bread and fruit and a drink to pupils.’

The Shrewsbury mother received a text message from the school to say her daughter was in lunch arrears one week when she was staying with her father.

He had promised to pay in cash at the end of the day after she accidentally left her lunch in his car, Ms Heath told The Mirror.

But since she already had arrears the school would not order her lunch and Ms Heath had to hurriedly pay online.

The 30-year-old kitchen designer said she was shocked when she was told if she hadn’t paid Madison would have been given the new treatment:

‘I called up immediately and explained I would pay online straight away as I didn’t realise she had arrears or no dinner money but also asked about what she would have been given if I hadn’t managed to read the text in time.

‘This is when the bread, fruit and water policy was explained to me. It had been mentioned in a previous school newsletter but I must admit I hadn’t read it properly.

‘I then wrote a status on my personal Facebook page alerting other parents who may have missed the newsletter about what was happening.

‘People caught on pretty quickly and it was shared and commented on quite a lot with most people agreeing that this was just a step too far.

‘Not only was my child not in the arrears amount threshold, I also pay £50 plus a week in advance for her breakfast clubs, dinners and after school clubs which the school are well aware of.

‘To withhold a hot dinner from her over the matter of £2.20 seemed shocking to me and many others.

‘Myself and others also agreed that the fact the child would be taken away from their friends and given a different ‘lunch’ in a separate room seemed like a punishment to a child and could easily create upset or bullying opportunities.

Social media users said they were outraged by the Dickensian move which will see children suffer, according to a parent

‘To take such a sharp stance on such a small amount of money just doesn’t tie in with how I imagine schools would like to be seen.

‘No compassion whatsoever to the children they see every day.’

Others backed her up on social media calling the move ‘outrageous’.

One woman wrote: ‘Is this for real, totally unbelievable, what the hell is happening in our society when this ‘Dickensian’ vein of thought is acceptable in our schools, absolutely dispicable (sic) and should be reported and highlighted by the press and media, the divide in our society is accelerating.’

The mum said it is ‘appalling’ some parents may be struggling and their child will then suffer embarrassment and called for a ‘re-think’.

She added: ‘Surely the first port of call is offering support and help to the parent and a point in the right direction. Not segregation of the innocent child.’

Headteacher, Mr Steve Morris, argued children are offered the replacement meal away from the others to avoid embarrassment.

He called the comments ‘unfair’ and said the newsletter did not explain children are allowed a selection of chilled fruit or veg from the salad bar, as well as bread and butter and milk or water.