Two 14-year-old boys planned to kill pupils and teachers at their school in a re-enactment of the 1999 Columbine High School massacre, a court heard today.

The teenagers, both now 15, are accused of conspiracy to murder and other offences relating to an alleged planned attack at their school in the North Yorkshire market town of Northallerton.

The schoolboys, who sat in court with their mothers with one wearing his school uniform, have gone on trial at Leeds Crown Court today.

Paul Greaney QC, prosecuting, told a jury that the boys hero-worshipped Eric Harris and Dylan Klebold – the teenagers who killed 12 students and a teacher at Columbine High, in Colorado, before shooting themselves.

One of the boys downloaded a manual from the internet that provided instructions on the manufacture of nail bombs, grenades and napalm, it is alleged. 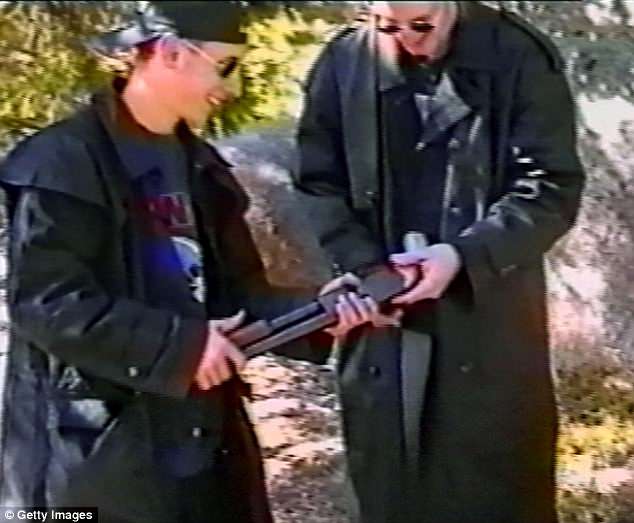 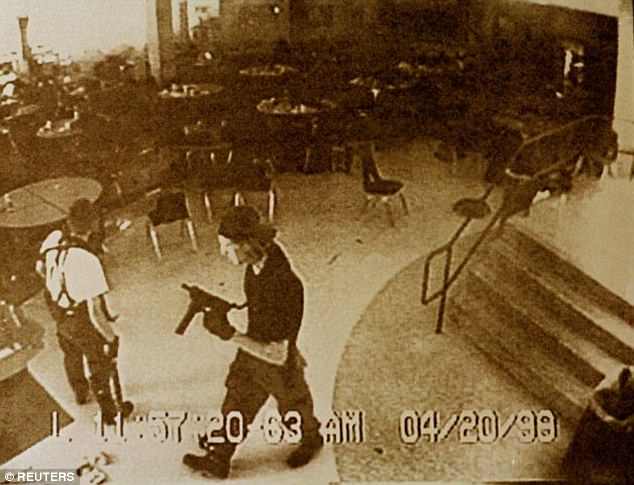 The Columbine killers killed 12 students and a teacher at Columbine High, in Colorado in 1999

Internet searches such as ‘how to shoot up the school’ and ‘what is the best weapon to shoot up a school with’ were also discovered on the older boy’s mobile phone, a jury was told.

‘Those two teenagers researched and discussed those killers and their interest in them turned to hero-worship. It was against that background that they plotted their own attack upon the school they attended.

‘In that attack, they intended to shoot and kill other pupils and teachers against whom they held a grievance.

‘They also, like their heroes, intended to deploy explosives and researched bombing-making techniques to that end.’

Mr Greaney said: ‘They intended a re-enactment of the Columbine High School Massacre although fortunately, in the result, they were stopped before their plans were put into action.’

The defendants sat outside the dock, behind their lawyers, in Court 1 of Leeds Crown Court as Mr Greaney began to outline the case.

Both sat with their mothers and one was wearing school uniform. 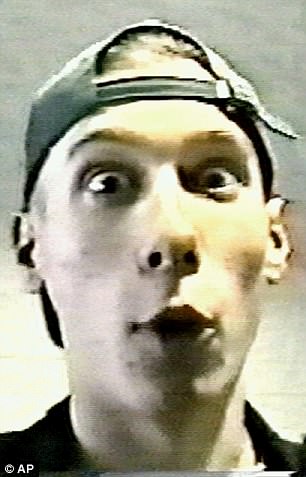 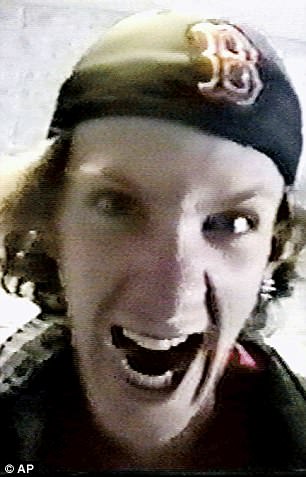 The two defendants agreed at some stage no later than late September 2017 to commit murder at the school they attended – but their plan was foiled before being put into action, the jury was told.

The older boy, who appeared to be the leader of the two plotters, condoned the Columbine High School Massacre and modelled himself on Harris, it was said.

A hideout made in an abandoned shack at the rear of a Londis Store was discovered which included materials capable of being used in bomb-making.

Mr Greaney QC told a jury this cache of items, which included petrol and a bag of screws, provides evidence this plan was real and not fantasy.

During April 2017, senior school staff discovered a fake account had been set up on the social networking site Instagram and was being used to post offensive images and comments about teachers.

It was discovered one of the defendants had been involved in setting up the account.

Both defendants downloaded a file entitled ‘anarchistcookbook2000’ and, when opened, gave the user access to a 241-page book called ‘Anarchy Cookbook Version 2000’.

That book provides instructions on the manufacture of bombs, including pipe bombs and nail grenades, and explosives, including napalm and nitroglycerin, a jury was told.

Mr Greaney QC added: ‘During May 14 and 15, 2017, {the older defendant} conducted Internet research on the manufacture of bombs.

‘He accessed sites including ‘Easy Explosives to Make’ and ‘Make a Bomb Out of Household Items’.’

On May 16, 2017, the defendants had a significant conversation on an instant messaging platform in which the younger defendant said: “I can’t be bothered anymore”.

The older boy replied with ‘Why not take some others out as well’ before sending another message which read: “If you’re gonna kill yourself, shoot up the school”.

‘The conversation occurred not in a vacuum, but rather in the context of adoration of the Columbine killers, the acquisition of a bomb-making manual and the carrying out by {the defendant} of further research to that end, ‘ added the prosecution.

The pair were arrested in late October 2017 and, during police interview, one of the boys said everything was fantasy, a court heard.

The second boy maintained he had initially believed his friend was joking but later he came to believe he did intend a massacre, and thereafter, acted to prevent it taking place, a jury was told.

The boys, now aged 15, have pleaded not guilty to all the charges and are standing trial at Leeds Crown Court.

Neither of the defendants nor the school can be named.

The trial, which is likely to last a month, continues.