Schoolgirl, 15, who stabbed two other teenagers with knife stolen from school in organised fight captured on video is detained for more than four years

A schoolgirl who stabbed two other teenagers during an organised fight caught on a video that went viral today started a lengthy spell behind bars.

The 15-year-old, who cannot be named for legal reasons, was sentenced to four-and-a-half years in a Young Offenders Institution after magistrates sent the case to the Crown Court after they deemed it out of their powers.

It started with a row over a bike being kicked in an argument that escalated over Snapchat.

A fight between the rivals was organised in a Berkshire field next to a leisure centre, as a group of 40 people looked on.

The knife used in the fight was stolen from a bushcraft lesson the college runs. At the end of the day the school discovered a canoe knife was missing.

She had taken the knife and used it during the fight and screams are audible in the shocking video as onlookers realised the defendant had a knife. 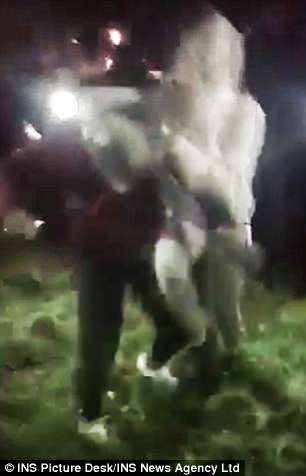 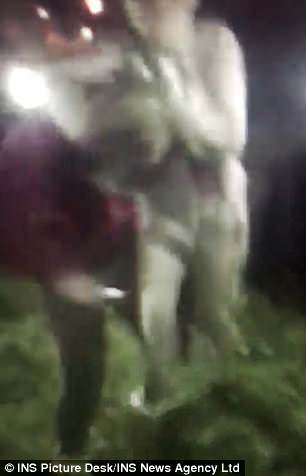 The terrifying moments when the young girls clashed on the playing field, was captured in the above mobile phone footage which soon went viral on social media

The pupil stabbed a 13-year-old and a 15-year-old, leaving one of the girls with injuries that would have been life-threatening had not received surgery. The other victim also required hospital treatment.

At the previous hearing, prosecutor Charlotte Webster told magistrates: ‘We say this is a pre-meditated attack, that left two people with serious injuries and is a very violent matter.

‘Were she older she would not be appearing here on bail, but likely in custody. The starting point for an adult could be 12 years, or at the lower end nine.

‘Even half of that would be four-and-a-half years and that is beyond the powers of the magistrates.

‘The first victim received four stab wounds that required surgery. It could have been life-threatening if she had not been treated. 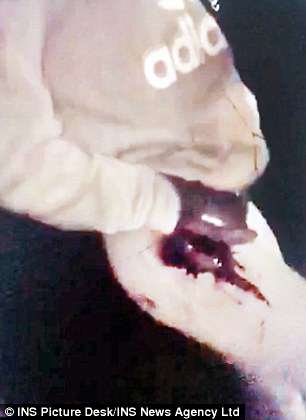 ‘The other victim received three stab wounds and was kept in hospital where she was observed closely.’

The fight took place in on a playing field near the Rivermead Leisure Centre, beside the River Thames in Reading on November 9 last year.

The schoolgirl previously admitted two counts of GBH with intent and a further charge of possession of a knife or bladed article in a public place at an earlier hearing and was sentenced at Reading Crown Court.

Detective Constable James Woodcock, of Thames Valley Police, said today: ‘This was a nasty attack on two teenage girls, one of whom sustained a serious injury which required immediate surgery.

‘Thames Valley Police will not tolerate knife crime, and will always thoroughly investigate assaults such as these and bring offenders to justice.

‘The offender had attended a pre-arranged fight and used a knife to cause these injuries, and I am pleased that she has been brought to justice and given a significant term of imprisonment.’