A brave schoolgirl made a harrowing 999 call as her stepfather poured petrol over her family house and threatened to set her family on fire.

Daniel Dare, 40, had a cigarette in his mouth and a lighter in his hand as he splashed fuel from a jerry can around the home of his ex-partner Keira Smith and her children.

Ms Smith terrified teenage daughter made an anxious 999 call as he did so, telling the operator: ‘I’m shaking. He is going out the house and he’s got petrol, he’s pouring petrol everywhere.’

Dare was later arrested at the scene and has now been jailed for six years.

In the 999 call made by the 15-year-old girl, whose 13-year-old brother was also at home, she said: ‘My dad has come round and he is not allowed and he is pouring petrol all over the house trying to kill me and my mum. My mum has little kids and they are asleep.’

She was heard shouting at Dare: ‘Stop now! Put that down and get out the house!’

Dare breached a restraining order when he first arrived at his ex-wife’s home in Esher, Surrey, late on an evening last August. He demanded to stay but she refused to let him in. 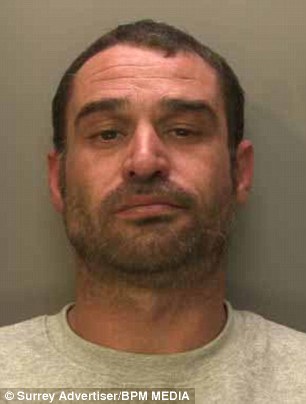 He returned two hours later armed with a sledgehammer and demanded money, but left for a second time once he was paid.

At 3am the following morning, he arrived for a third time, bringingh a petrol can and threatened to kill the family if they did not let him in.

He poured petrol over a boat left outside the property and pulled out a lighter as the 15-year-old schoolgirl began to make her desperate call to police.

Surrey Police officers arrested Dare when he returned to the address at 5am and found he was armed with a lock knife.

Dare was jailed at Guildford Crown Court after he was found guilty of threats to kill and breaching a restraining order.

She said: ‘The victim has been extremely brave in giving evidence in court, as this meant she had to re-live the traumatic ordeal she suffered on the night of 14 August last year.

‘Her 15-year-old daughter and 13-year-old son also gave evidence in court and I would like to applaud their courage as well, as this must have been extremely harrowing for them both.’

DC Roberts continued: ‘This incident was just one episode in a history of abuse, threats and assaults the victim and her family suffered at the hands of Dare, against who she had obtained a restraining order in November 2015 after he held a knife to her throat. She is now trying to put this horrific ordeal behind her and focus on rebuilding her and her children’s lives.

‘We would urge anyone who is a victim of any kind of domestic abuse to come forward – we will always take your allegations seriously and give you the help and support you need.’