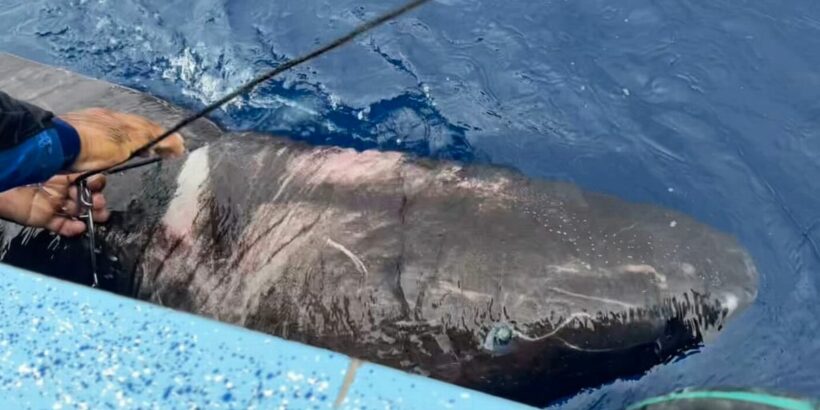 Scientists tagging tiger sharks in the Caribbean were stunned when they caught an ancient half-blind 'dinosaur' shark that is normally found in the Arctic.

While researching off the coast of Belize, Devanshi Kasana and his team of fishermen chanced upon a hybrid Greenland shark that was milling about in the warm waters.

The rare species of shark is normally confined to the Arctic, where it's thought to feed on the dead carcasses of polar bears.

Phys.org reports that the shark they found had the texture of 'elongated, smooth stone' with a 'blunt snout and small pale bluish coloured eyes'. Remarking on his find, Mr Kasana said: ""At first, I was sure it was something else, like a six-gill shark that are well known from deep waters off coral reefs.

"I knew it was something unusual and so did the fishers, who hadn't ever seen anything quite like it in all their combined years of fishing."

What is less clear is how the shark ended up thousands of miles from its Arctic home.

Greenland sharks are exceedingly rare and due to the extreme nature of their environments, scientists have been unable to study them in much depth.

It is known that they can live for more than 400 years, making them the longest-living vertebrate on the planet.

Interestingly, as so little about the species is known, scientists have been unable to rule out the possibility they are found all over the world, sticking to the cooler depths of the ocean more suitable to their needs.