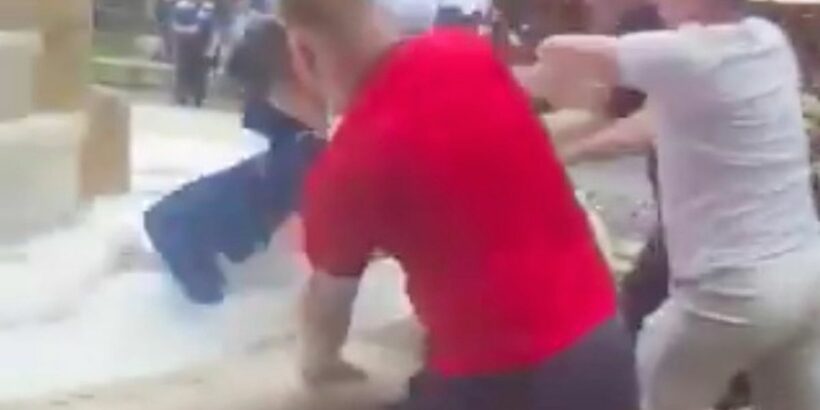 Scotland fans have been filmed turning on one of their own and dropping another member of the Tartan Army in a fountain – because he supports Rangers.

A video of the incident has been widely circulated on social media, although police say it has not been reported to them directly.

In the short clip, the man is seen smiling and laughing as he is picked up and dumped into the Leicester Square water fountain ahead of Friday night's Euro 2020 clash with England.

A spokesman for the Metropolitan Police said: "A video has been shared on social media which shows a man being thrown into a fountain in Leicester Square. "It does not appear that the incident has been reported to police.

"There continues to be an increased police presence across the West End, including in Leicester Square, to ensure the safety of football fans and the wider public."

A voice at the end of the video can be heard making a sectarian insult, Glasgow Times reports.

In the clip, someone is heard calling the man, who is thought to be a Rangers fan, a "dirty orange b******".

It comes after huge crowds gathered in Leicester Square, Kings Cross and Hyde Park for the Euro 2020 group match.

Supporters draped themselves in Scottish flags and kilts, with some pictured waving flares.

Around 20,000 Scots are thought to have travelled to England for the group stage game.

Some were heard chanting "Yes sir I can boogie", sung by Scotland as they qualified for the Euros.

The much-anticipated match, the 115th in international football's oldest rivalry, is the first time the two sides have met in a major tournament since Euro '96 when Paul Gascoigne's famous goal sealed a 2-0 win.

Wembley Stadium, in northwest London, was set to host 22,500 people for the game at 8pm on Friday, June 15.

The Met Police's football chief earlier warned fans not to travel to Wembley without a ticket. Fuming fans were angry to find their traditional party spot of Trafalgar square, surrounded by barriers and no other safe fan zone set up specifically for travelling support.

Liam Moore, from Dalkeith, said: "It was obvious that thousands of Scots would be coming down – ticket or no ticket – so they should have arranged facilities.

"The talk is about keeping people safe but if a fan zone is safe for NHS workers it would be safe for Scotland fans."

"What will happen is big numbers of fans getting together in any case. But we’re not that bothered as we’ll have a good time anyway."