The disturbing pictures include one of two of deers which died after getting tangled in the same rope.

While another of the sickening images shows a huge live red deer, which has a mass of rope and buoy stuck in its antlers. 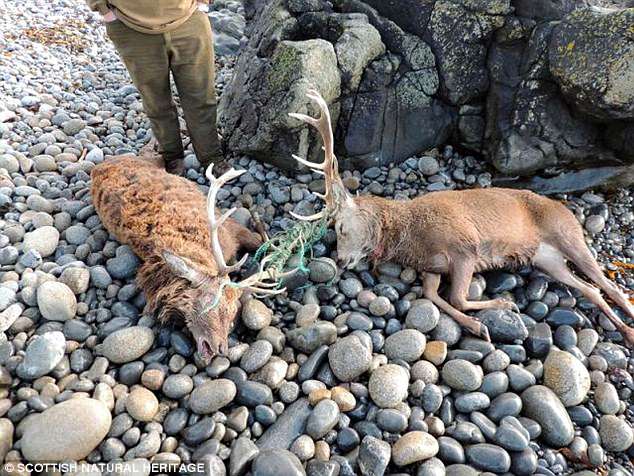 The pictures were shared on social media by Scottish National Heritage as part of a campaign against plastic pollution.

They were taken on the island of Rum in the Inner Hebrides, an island renowed for its iconic skyline and supposedly unspoilt beauty.

She said: ‘It is heartbreaking to see wildlife being hurt and killed by our thoughtless waste and litter.

‘I’ve seen plenty of images of seabirds and sea creatures but the deer on Rum show that land animals are also badly affected.

‘Clearly the problems is so widespread that it will take years to rid our coastline of plastic debris.

‘I hope the heartbreaking image of two stags who were killed because of our discarded rope reminds us all to take our litter home whether we work on the seas or holiday on the beach.’ 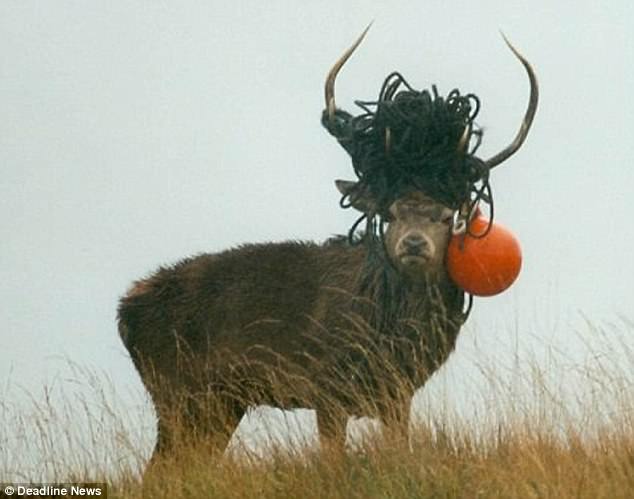 Rum National Nature Reserve manager Lesley Watt said: ‘Along with many organisations, SNH recently joined the campaign to bin plastic straws and we’re cutting down on disposable plastics by providing our staff with re-useable travel cups.

‘If you use your own shopping bag for life when shopping to take litter home after a day at the beach you could help save an animal’s life.’

The SNH Nature Scotland blog stated: ‘Most of us have seen upsetting images of turtles, whales, dolphins, or seabirds entangled with plastics or discarded fishing gear.

‘Perhaps less well known is the tragic effect that marine litter can have on mammals when it washes on up on our beaches.

‘Sadly the two stags did not survive the ordeal.

‘Often, the ropes starts around the antlers but as the deer struggles to free itself, the rope catches its legs too.

‘Rope can be surprisingly heavy and a sapping burden for a deer to carry around on its head. It can be restrict movement from feeding properly and leading to starvation.

The release of the pictures by Scottish National Heritage follow the recent discovery of almost half a million plastic pellets on a beach in Fife in Scotland.

The ‘nurdles’ have been discovered on 93 per cent of beaches and the study has led to renewed calls for the Scottish Government to impose new regulations on manufacturers to crack down on the problem. 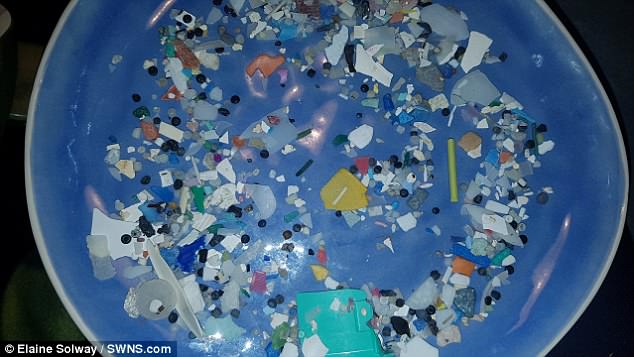 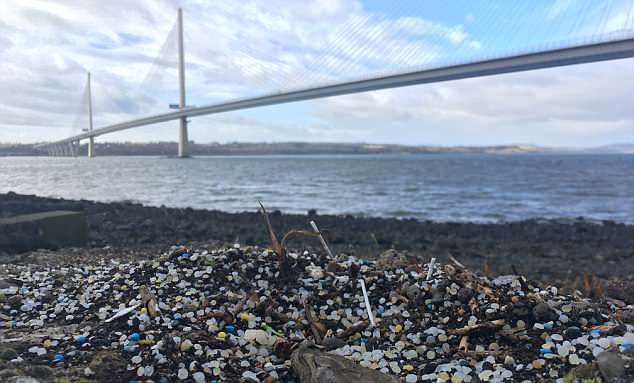 Nurdles have been discovered on 93 per cent of beaches, research shows, with the worst one at North Queensferry (pictured) in Fife – where 450,000 pellets were found

The pellets were discovered as part of the Great Nurdle Hunt, a national beach clean event is organised by environmental charity Fidra.

Several beaches in Cornwall, including those near Newquay and Perranporth, were also cleaned  and campaigners picked up around 1,000 nurdles in less than two hours.

The Daily Mail has been running a ten-year campaign against plastic pollution which has been endorsed by Prime Minister Theresa May and Sir David Attenborough.