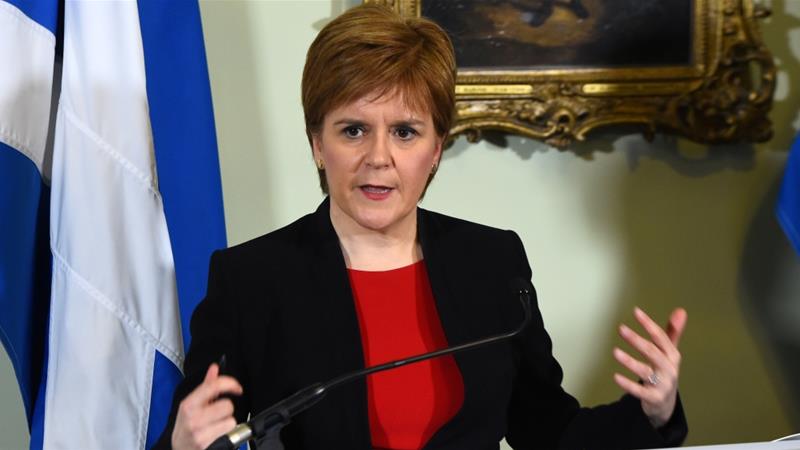 The leader of the Scottish National Party Nicola Sturgeon said she will support the opposition Labour party if it lodges a no-confidence motion on British Prime Minister Theresa May’s rule.

May cancelled a parliamentary vote on Monday approving her preferred arrangement for leaving the European Union, which was scheduled for Tuesday, in the face of widespread opposition from within her party and the opposition.

“If Labour, as official opposition, lodges motion of no confidence in this incompetent government tomorrow, [the SNP] will support & we can then work together to give people the chance to stop Brexit in another vote. This shambles can’t go on – so how about it?” Sturgeon wrote on her Twitter account.

More than 100 members of the prime minister’s Conservatives were set to vote against the deal, as well as the Labour party.

If the vote had failed, it would almost certainly have ended May’s rule. Instead, she reportedly will head to Brussels in the hope of securing changes to her deal with the EU, which several European states have flat out refused to negotiate.

The leader of Britain’s pro-EU Liberal Democrats also said his party would support a vote of no confidence if one were called by the Labour Party.

“With the fiasco today, the government has really lost all authority. I and my colleagues will fully support the leader of the opposition if he now proceeds to a no-confidence vote as duty surely calls,” Liberal Democrat leader Vince Cable said.

A motion of no confidence, if passed, would force a new election unless an alternative government can be formed by the opposition.

Labour currently has 257 MPs and the Scottish nationalists have 35. The combined total does not take into account divisions within the Labour party and falls short of the British parliament’s effective working majority of 323.

A no-confidence motion would, therefore, have to rely on the support of rebels within the Conservative party, as well as other smaller parties.

Labour leader Jeremy Corbyn has repeatedly stated he is ready to form a minority government or support a snap general election.

The opposition leader wants to negotiate a new deal with Europe, which he says will protect the rights of Europeans living in the United Kingdom, as well as give the UK access to the European Customs Union and single market, to ease trade.

Labour has sent mixed signals on whether they would support a second referendum on Britain’s membership of the EU, highlighting its own internal divisions on the issue.

Some in the party fear committing to a second vote will turn away Labour voters who backed Brexit, especially in the northern heartlands, while others believe supporting a new referendum will draw voters who backed the campaign to stay in the EU.