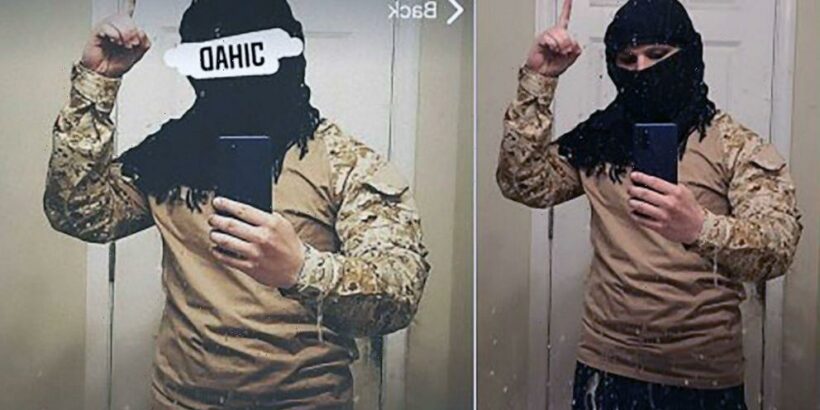 A Washington state man has been arrested for alleged efforts to join the Islamic State group, federal prosecutors said.

Elvin Hunter Bgorn Williams, 20, of Seattle, was taken into custody at the departure gate of the Seattle-Tacoma International Airport last Friday as he attempted to board a flight to Cairo, federal prosecutors said. After being arrested, Williams agreed to speak with agents of the Federal Bureau of Investigation and allegedly stated that he intended to become an “executioner” or a “machine-gunner” for ISIS, according to a criminal complaint unsealed Tuesday in the United States District Court for the Western District of Washington at Seattle.

“It doesn’t matter what you guys do to me. I get rewarded for it,” Williams told the FBI agents, according to the complaint. “I want to die. We love our deaths more than you love your lives.”

Williams was charged with attempting to provide material support to a foreign terrorist organization. He faces up to 20 years in prison if convicted, federal prosecutors said. He made an initial video appearance in court on Tuesday and was ordered detained pending further proceedings. A federal public defender who was appointed to represent Williams did not immediately respond to ABC News’ request for comment.

Williams, whom federal prosecutors described as “self-radicalized,” first came to the FBI’s attention when he was 16. Administrators at his high school contacted the FBI in 2017 to report that Williams was telling others he wanted to join ISIS and that the deadly terrorist attack on an Ariana Grande concern in England was justified because the singer dressed provocatively, according to the complaint.

At the time, Williams’ mother told FBI agents that he had been kicked off social media for terms of service violations related to pro-ISIS posts and that she had cut off the internet service at their home to keep him from accessing extremist websites and social media accounts. She also told the agents that her son had said he wanted to move to Syria or Iraq to fight for the jihadist group, according to the complaint unsealed Tuesday.

Last November, a member of a Seattle-area mosque contacted the FBI to report concerns about Williams. Federal investigators said the mosque had been looking after Williams for more than a year “as an act of charity” in an attempt to de-radicalize him — helping him with a place to live, food and tuition for a semester of college. The mosque also provided Williams with a cellphone and a laptop to help him find a job, but the members made clear he would have to abandon ISIS if he wanted their help, according to the complaint.

Williams was asked to return the phone after a member of the mosque saw him using it to watch ISIS propaganda videos and engage in online chats with other radicalized individuals. Members of the mosque reviewed the phone and were disturbed to find numerous ISIS-related videos that depicted scenes of graphic violence, including beheadings, as well as instructions on how to build a bomb, according to the complaint.

The FBI opened an investigation into Williams and used several confidential informants, some of whom posed as ISIS recruiters, to monitor his activity. Federal investigators said Williams swore an oath to ISIS in November 2020 and “became consumed with activities to join the cause overseas.”

In messages cited in the complaint, Williams expressed his willingness to become a martyr, how he would “love” to behead someone and his concern that he would get arrested at the airport. He also stated that he would commit an attack on U.S. soil if he was unable to travel abroad to fight for ISIS and discussed an unsuccessful attempt to convince a friend to help him carry out an attack on the upcoming Seattle gay pride parade, according to the complaint.

Earlier this year, Williams applied for a U.S. passport and worked at a job in the Seattle area to save up money for his travel expenses. He received his passport on May 6, according to the complaint.

“This defendant proved persistent in his efforts to join ISIS — speaking with enthusiasm about acts of horrific bloodshed in the Middle East and here at home,” Tessa Gorma, acting U.S. Attorney for the Western District of Washington, said in a statement Tuesday. “I want to commend those citizens who contacted law enforcement — including his family and faith community — expressing concerns about the defendant’s radicalization. Their courage to speak up and work with law enforcement was important to ensure public safety.”