SEBASTIAN SHAKESPEARE: What does a smile cost? £30k and 15 months of dental treatment, reveals Judy Murray

Judy Murray was mocked for her ‘wooden’ performance on Strictly Come Dancing but she was proud of her sparkling smile.

Now the mother of tennis stars Andy and Jamie Murray has revealed that she spent £30,000 on 15 months of cosmetic dental treatment.

‘I was always scared of the dentist, which led to me not looking after my teeth very well — and I got to the stage where I was reluctant to smile properly,’ says the 58-year-old Scottish tennis coach. 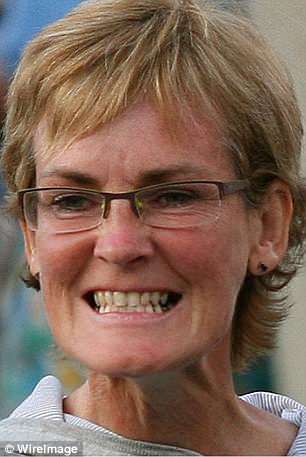 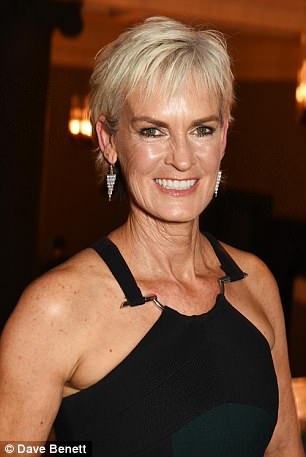 Judy Murray, the mother of tennis stars Andy and Jamie Murray has revealed that she spent £30,000 on 15 months of cosmetic dental treatment (left: before; right: after)

‘I got sick of reading stories about me saying, “She never smiles — she’s so serious.”

Judy, who divorced her sons’ father, William Murray, in 2005, does not disclose what work she had done, but it is thought to have involved dental implants and her remaining teeth being straightened and whitened.

Is Prince Charles adding to the pile of Dracula sequels?

HRH is to publish a new book, The Transylvania Florilegium.

Just 150 copies will be printed, featuring illustrations by artists who ‘travelled to Romania [where Charles owns two properties] for two weeks to observe the rich and diverse countryside that’s under threat from changes to farming practice’.

Charles will personally sign every gold-leaf copy — which will cost £12,950 each.

Almost enough to cover the cost of a royal wedding.

The dental work will not, however, encourage her to have other cosmetic beauty treatments.

‘I’ve had a bit of Botox because I always had very deep lines,’ she revealed in 2014.

‘I’ve been seen as the mum who sits on the sidelines, pulls faces, waves her fist and looks like some kind of scary monster.’

But the next year, she said: ‘It’s not something I’d repeat. You should just put up with the face you’ve been given.’

The Botox was part of an extensive makeover which has also seen Judy ditch her mousy-brown locks for a stylish platinum-blonde cut.

Judy and her dance partner, Anton du Beke, were eliminated from Strictly by a unanimous vote from the judges.

One critic commented unkindly: ‘She’s got as much movement as a snail with arthritis.’

And the groom wore white… Hilton heir ties the knot

When hotel heiress Nicky Hilton wed banking scion James Rothschild in London, it was the union of two of the world’s richest dynasties.

Now her younger brother, Barron, 28, has joined forces with one of New York’s best-connected families after tying the knot with socialite Tessa Grafin von Walderdorff. 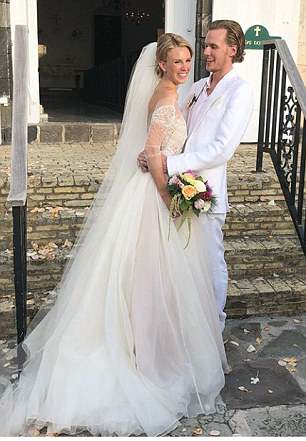 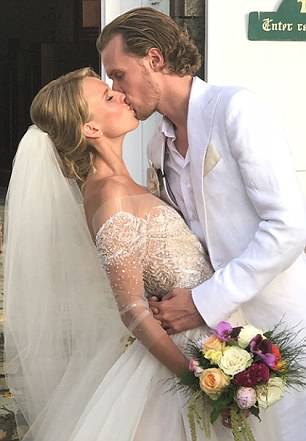 Barron Hilton, 28, has joined forces with one of New York’s best-connected families after tying the knot with socialite Tessa Grafin von Walderdorff

The 24-year-old daughter of filmmaker Count Franziskus von Walderdorff and artist Sabrina Brühwiler-Verreccia wore a shimmery gown with sheer sleeves and a long white veil at the St Barts ceremony.

Perhaps she could now give some wedding planning tips to her sister-in-law, Paris, who got engaged for the third time earlier this year, to U.S. actor Chris Zylka.

Pleased to hear the Dowager Countess of Carnarvon is recovering well after the heart attack her son Harry Herbert had told me about.

Jean, 83 — a friend of the Queen — has been supporting the Newbury Spring Festival, which she started 40 years ago.

She’s doing so well, she’s even undertaking some Pilates.

There was confusion over Jean not being able to travel but she is, in fact, in this country rather than in her native U.S., as I reported last week.

Best-selling author Philip Pullman refused to have his hair cut for months while finishing his latest book, La Belle Sauvage.

‘I made a promise to the muse that I would not,’ Pullman told his Hay Festival audience.

Before he finally had a trim, he said his publisher told him he looked like ‘a retired roadie working in a petrol station’ as his hair was in a ponytail.

Pullman, best known for the His Dark Materials trilogy, confessed that he very much believed in his muse: ‘To get her to visit you, you must sit in the same place every day at your desk.’

The world’s richest living artist Damien Hirst, who is worth a reported £270million, should have no problem funding his new girlfriend’s expensive taste in clothes. 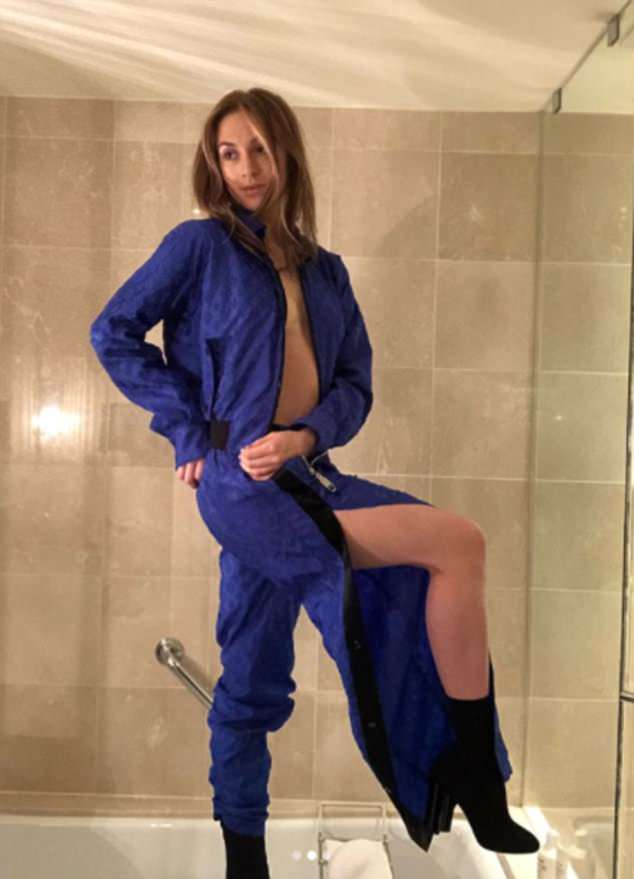 Actress Sophie Cannell, 25, is enjoying showing off her new designer wardrobe on social media and shared this snap of herself sporting a £2,970 Louis Vuitton tracksuit — in a bath

Actress Sophie Cannell, 25, is enjoying showing off her new designer wardrobe on social media and shared a snap of herself sporting a £2,970 Louis Vuitton tracksuit — in a bath.

The former ballerina from Southampton, who met shark pickler Hirst, 52, when she was waitressing at the Chiltern Firehouse in London, also offered her followers a peek of her leg and bare torso.

A dog’s dinner! Kate and pet hit the Dorchester 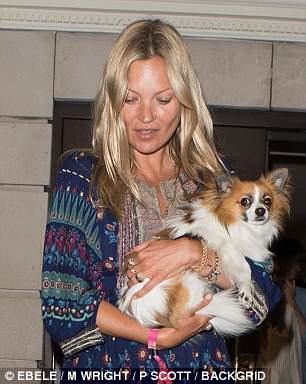 Kate Moss with her pooch leaving the Dorchester

Supermodel Kate Moss, 43, turned heads as she left the Dorchester hotel in the early hours of Monday, but it was her fluffy pet pooch cradled in her arms that drew the most attention.

Last year the former hellraiser added the Papillon breed, a type of spaniel, to her menagerie which includes a Staffie cross named Archie that was the subject of a custody battle with her ex, Jamie Hince.

Moss has lamented that being a dog owner meant she had t o change her style.

‘I’m having to rethink everything. You can’t walk a dog in a heel. You look ridiculous.’