Former students at a school in North Yorkshire have claimed that a culture of casual racism, sexism, homophobia and bigotry went unchallenged by some members of staff for years.

In an open letter, members of Conscious Raising Ryedale, slammed Lady Lumley’s School in Pickering and issued it with a number of anti-bullying recommendations following their own experiences in the classroom.

The personal accounts come just weeks after an Ofsted report downgraded the school to ‘inadequate’ and revealed how pupils were left concerned with the ‘regular use of homophobic and racist language around the school’.

The Ofsted report, which was published on June 16, described how students felt ‘threatened’ by the conduct of some of their peers and claimed that some staff did not challenge the offensive language used by students. 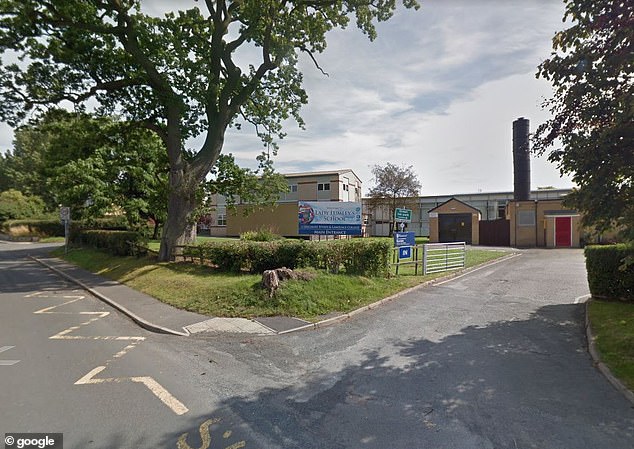 Former students at Lady Lumley’s school in Pickering, North Yorkshire (pictured is a GV of the school), have claimed that a culture of casual racism, sexism, homophobia and bigotry went unchallenged by some teachers for years

It stated: ‘Pupils told inspectors that behaviour on one of the school buses is poor. Pupils feel threatened by the conduct of some pupils.

‘Pupils do not feel safe on the school field because of the behaviour of some pupils. This includes smoking and rough behaviour by some pupils on the ‘bank’.

‘Pupils worry about the lack of staff presence outside at lunchtime for the first 15 minutes.

‘Pupils are concerned about the regular use of homophobic and racist language around school. They said that when staff hear such language, it is not always challenged.

‘A large minority of pupils have little confidence in the school’s ability to deal with bullying. School leaders feel they are addressing the bullying issues well but pupils do not agree. Some parents and carers share pupils’ views about the ineffective management of bullying.’

Following the publication of the Ofsted report, a joint letter to parents from headteacher Richard Bramley and the chair of governors Stephen Croft questioned the findings and asked: ‘When you read the report, did it sound like the school your son or daughter goes to?’

It was also revealed by North Yorkshire County councillor for Pickering Greg White that the school was trying to ‘suppress’ the report by taking legal action.

However members of the Conscious Raising Ryedale said suggestions that the report did not offer a reflection of the wider community was ‘simply not true’.

In a personal account, seen by The Yorkshire Post, one former pupil described how teachers were ‘turning a blind eye to racist and/or homophobic comments’ inside the school. 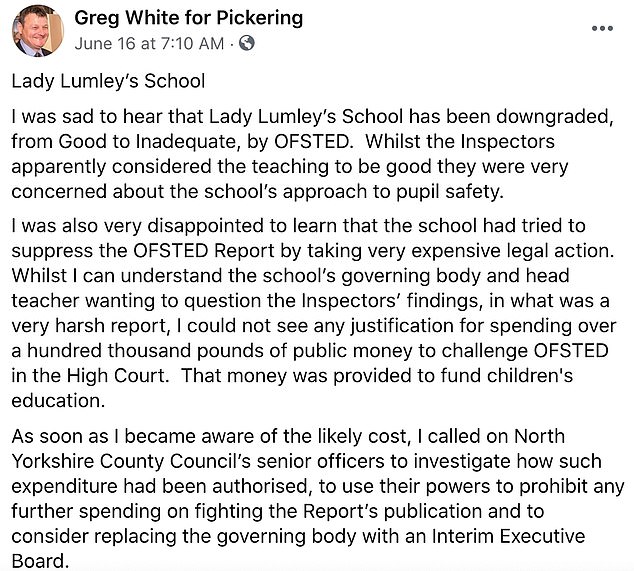 The pupil wrote: ‘Teachers turning a blind eye to racist and/or homophobic comments have meant that a culture of casual racism and homophobia has prevailed and we are aware that raising awareness of this doesn’t solve the problem, but rather targeted commitments to change will.’

While another member of the group wrote: ‘The fact that the head said this is not a reflection of the wider community is simply not true. The children who bullied myself and my peers are their parent’s children. Sexism, homophobia and racism is rife in Ryedale.’

In its report, Ofsted went on to state: ‘Leaders think that they take bullying seriously and believe that they act on it effectively.

‘However, a large minority of pupils, and parents, do not share this view. Leaders should review and evaluate the ways in which they manage bullying so that pupils and parents can have confidence that leaders protect pupils from bullying.’

Following the report, North Yorkshire County councillor for Pickering Greg White criticised the school for trying to ‘suppress’ the report.

He wrote on Facebook: ‘I was sad to hear that Lady Lumley’s School has been downgraded, from Good to Inadequate, by OFSTED. Whilst the Inspectors apparently considered the teaching to be good they were very concerned about the school’s approach to pupil safety.

‘I was also very disappointed to learn that the school had tried to suppress the OFSTED Report by taking very expensive legal action.

‘Whilst I can understand the school’s governing body and head teacher wanting to question the Inspectors’ findings, in what was a very harsh report, I could not see any justification for spending over a hundred thousand pounds of public money to challenge OFSTED in the High Court. That money was provided to fund children’s education.

‘As soon as I became aware of the likely cost, I called on North Yorkshire County Council’s senior officers to investigate how such expenditure had been authorised, to use their powers to prohibit any further spending on fighting the Report’s publication and to consider replacing the governing body with an Interim Executive Board.

‘As a consequence of OFSTED’s Report Lady Lumley’s will be required to become an Academy. It is the Regional Schools Commissioner who will determine which Multi-Academy Trust should sponsor the school.

‘I will do whatever I can to help Lady Lumley’s become an excellent school, providing great teaching in an environment where all pupils feel valued and safe.’