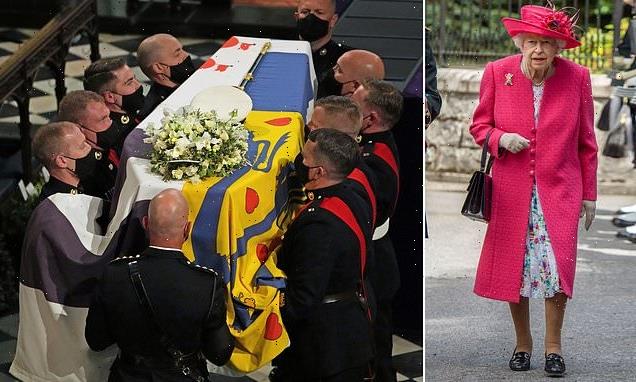 Top secret plan for Queen’s death revealed: ‘Operation London Bridge’ says flags will be lowered to half-mast within 10 minutes, the Royal Family’s website will go black and King Charles will address the nation 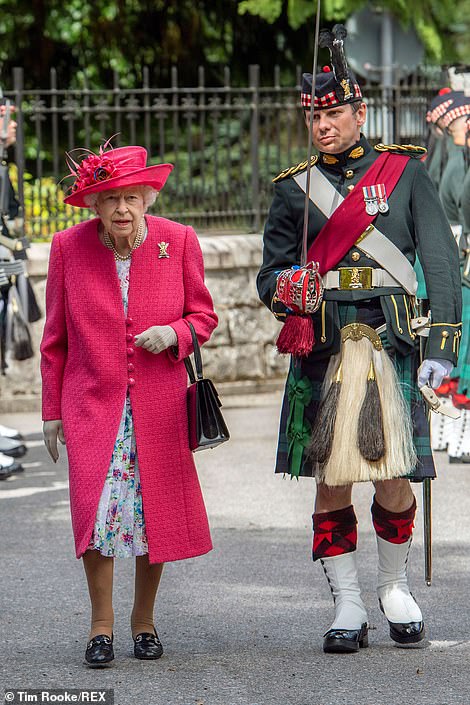 The top secret plans for the Queen’s death, known as Operation London Bridge first started in the 1960s, has been updated since the pandemic began and now leaked via Whitehall

The top secret plans to be enacted when the Queen dies were revealed today including lowering all Government flags to half mast within ten minutes followed by a TV address by Prince Charles and a pre-planned memorial service at St Paul’s Cathedral for ministers that will be made to look ‘spontaneous’.

‘Operation London Bridge’ has been leaked after being updated during the coronavirus pandemic with the day she passes away being called ‘D-Day’.

But there is no suggestion that Her Majesty, 95, is in poor health and there are major questions about how documents so sensitive could be made public.

In more embarrassment for the Government, Operation Spring Tide, the closely-guarded plan for Prince Charles’ accession to the throne, was also included in the leak.

The first person outside Buckingham Palace to be told the sad news will be the Prime Minister, who will be telephoned by the Queen’s Private Secretary, before a ‘call cascade’ to members of the cabinet, members of the privy council and senior figures including in the Armed Forces, who plan gun salutes across the country hours later, it has emerged.

They will all be given the same scripted message: ‘We have just been informed of the death of Her Majesty The Queen. Discretion is required’.

The royal household will then issue an ‘official notification’ delivering the sad news to the public via the TV and press including confirmation that Her Majesty’s funeral will take place ten days later at Westminster Abbey before being buried in the family crypt next to her beloved Prince Philip at Windsor Castle.

Before that her body will lie in state for three days in the Palace of Westminster, which will be open 23-hours-a-day for members of the public to file through to pay their respects.

Cabinet Office documents leaked to POLITICO show that the Government is in a flap about ensuring that all flags are lowered to half-mast within ten minutes to avoid inflaming ‘a wave of public anger’. One briefing suggests that contractors are being considered solely to do the job.

The Department for Transport has also warned that London will be ‘full’ for the first time in history, with trains and buses packed with people flooding into the capital to mourn the Queen and then line the streets for the funeral. Hotels and B&Bs will also be full.

The updated ‘Operation London Bridge’ also contains plans for social media and has been updated for the internet age.

The Royal Family’s website will be replaced with an all-black page with a short statement confirming Her Majesty’s death. All  GOV.UK websites will have a black banner added.

Any tweets by Government department social media accounts and ministers will have to be signed off by spin doctors. And no public statements permitted until the Prime Minister speaks first, probably in a Downing Street address.

Here is a day-by-day breakdown of ‘Operation London Bridge’: 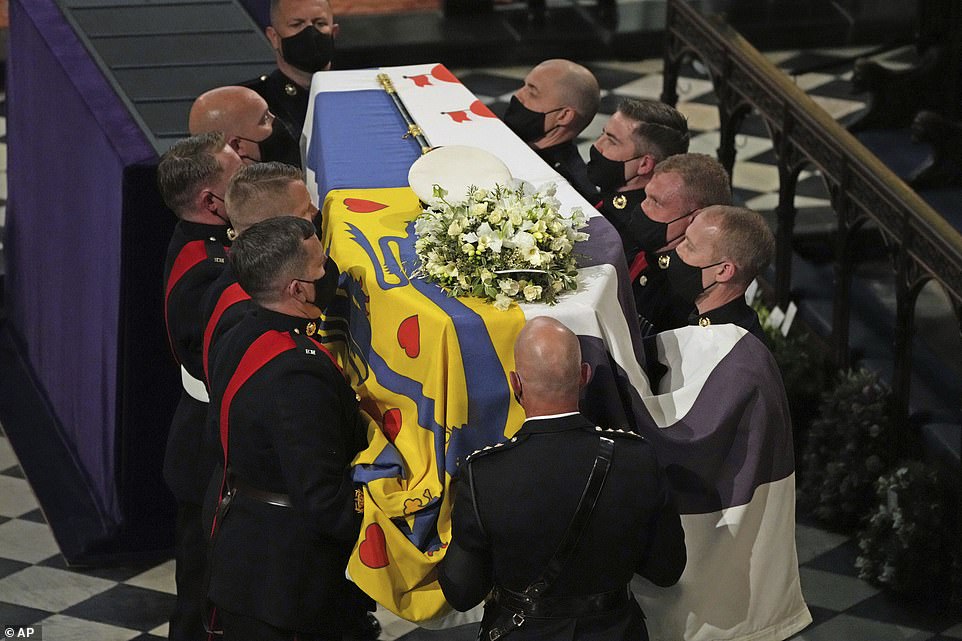 The coffin is carried into St George’s Chapel during the funeral of Prince Philip. The Queen will also have the same journey after a state funeral at Westminster, before being buried in Windsor

Operation Spring Tide, the closely-guarded plan for Prince Charles’ accession to the throne, was also included in the leak. Charles will address the nation on the day his mother dies, the plan says

The Prime Minister will be informed by phone call and message that the Queen is dead. It is not clear if the code: ‘London Bridge has fallen’ will be used by Buckingham Palace but this has been the rumour since the plan was first drawn up in the 1960s.

A ‘call cascade’ will begin, informing politicians and civil servant s in order of seniority, starting with the cabinet, the cabinet secretary and the Privy Council.

There is a script that should not be diverted from, with the individual being told: ‘We have just been informed of the death of Her Majesty The Queen. Dscretion is required’. The call will then be ended.

Only then will an ‘official notification’ delivering the news to the public -likely to be to the Press Association and the main UK broadcasters. It may also confirm plans for the queen’s funeral, likely to be held 10 days following her death.

An email will also be sent to ministers and civil servants saying: ‘Dear colleagues, It is with sadness that I write to inform you of the death of Her Majesty The Queen’.

Immediately all flags on Whitehall and across state buildings should be lowered to half mast. No 10 Downing Street has said it is concerned that they don’t have a full time ‘flag officer’ – meaning there are certain hours of the day where the flag could be difficult to lower. A contractor could be used in those periods, documents say.

Parliament will be recalled the devolved legislatures in Scotland, Wales and Northern Ireland will adjourn.

Official Twitter, Facebook and Instagram accounts will also turn black and all tweets paused other than those already agreed – but there will be silence until the Prime Minister at the time speaks publicly first.

The PM will speak in Downing Street on live TV to give the first tribute to Her Majesty.

He or she will then go to see the new King, Prince Charles, who will address the nation himself at 6pm to coincide with the main evening news bulletins.

The Prime Minister and the most senior cabinet ministers will then go to a service of remembrance at St Paul’s Cathedral. Despite being pre-planned it should be made to look ‘spontaneous,’ according to the official documents leaked to POLITICO.

They will proclaim King Charles the new sovereign. All men will be expected to wear morning dress or lounge suits with black or dark ties. No medals or decorations can be worn.

An official will be filmed reading the proclamation that Britain has a new monarch  – simulataneously the same message will be read at the Royal Exchange in the City of London, next to the Bank of England.

At Midday, MPs will give tributes in the House of Commons, lead by the Prime Minister.

And at 3.30pm the Prime Minister and the cabinet will go to Buckingham Palace will have an audience with the new King Charles – but no spouses will be allowed. 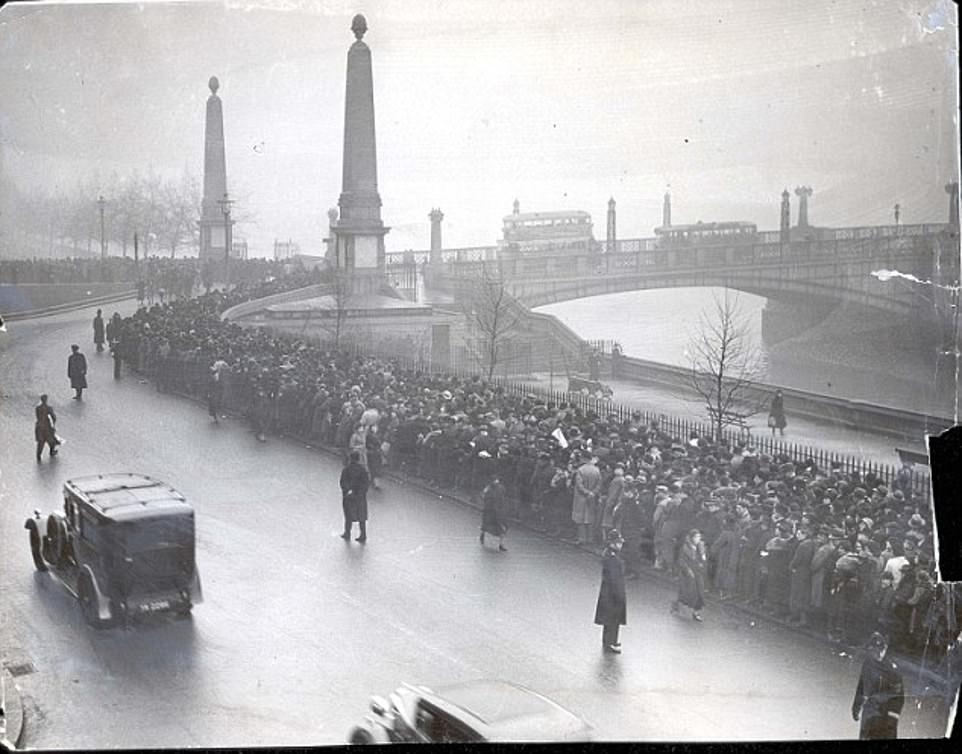 Wherever the Queen’s body rests, it will now be returned to Buckingham Palace, where her coffin will be in the Throne Room. There will be an altar, the pall, the Royal Standard, and four Grenadier Guards, their bearskin hats inclined, their rifles pointing to the floor, standing watch.

There are different plans depending on where the Queen was when she passes away.

If she was at Sandringham in Norfolk, her body will be carried to London on the Royal Train – it will arrive at St Pancras Station in London, where her son Prince Charles, the PM and Cabinet Ministers waiting.

If Her Majesty is at Balmoral in Scotland, the Plan A, known as Operation Unicorn, will begin.

The Royal Train will be sent to Aberdeenshire to convey her coffin back to London, again to St Pancras.

If this is not possible officials will switch to Operation Overstudy, meaning the coffin will be taken to London by plane from Aberdeen Airport. This is likely to land at London Heathrow or RAF Northolt.

Her Majesty spends most of her time at Windsor Castle, where she has been in a covid bubble since the start of the pandemic. If she dies there then her body will be moved to the capital by car.

Another day of tributes in the House of Commons is expected as well as the devolved parliaments.

The new King Charles will begin a tour of the UK.

It will begin with a visit to Westminster Hall in the Houses of Parliament, where MPs will give a ‘motion of condolence’.

His next stop will be Edinburgh to visit the Scottish parliament followed by a memorial service at St. Giles Cathedral in Edinburgh.

He will then attend a service at St. Anne’s Cathedral in Belfast.

Meanwhile in London the first rehearsal of the procession of the Queen’s coffin from Buckingham Palace to the Palace of Westminster via The Mall will take place, known as Operation Lion.

The Queen will leave Buckingham Palace and carried to the Palace of Westminster to lie in state.

The procession will be the first great military parade. A similar slow march for the Queen Mother in 2002 involved 1,600 personnel and stretched for half a mile. The route is thought to hold around a million people.

A memorial service will be held when she arrives. 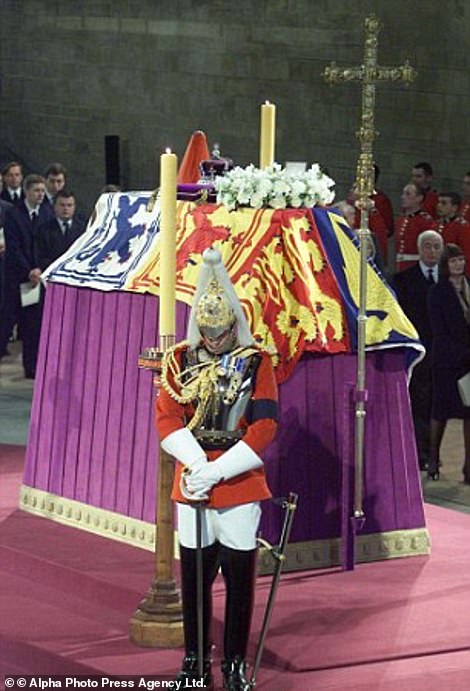 The Queen Mother’s was allowed to lie in state in Westminster, with Her Majesty doing the same in the event of her death

Her coffin will sit on a dark catafalque – a decorated wooden framework supporting the coffin of a distinguished person during a funeral or while lying in state – to make it easier for the public filing through to see the coffin.

The first people to visit will be VIPs, who will be given timed slots to pay their respects.

Then the public will be able to walk through with the room only close for one hour each day.

Meanwhile Charles will fly to Wales for the final leg of his UK tour. He will visit the Welsh parliament before a memorial service at Llandaff Cathedral in Cardiff.

And there will be huge amounts of planning going on in the royal household and in Whitehall, especially ensuring heads of state, VIPs and dignitaries have arrangements to head to the UK for the funeral on Day 10.

The Department for Transport, Home Office and Border Force have plans in place for the number of Britons and foreign tourists expected to go to London in this period.

Transport for London will also be involved to ensure Tube and bus provision is sufficient.

More than a million people could arrive, meaning London’s hotels, public transport and public spaces will be ‘full’, one document says. Police leave will be likely be cancelled but there are concerns about the number of stewards required and where to find them.

The day of the Queen’s funeral. It will be a ‘Day of National Mourning’ – although will not be an official bank holiday. If it falls on a week day it will be left to employers to decide if staff can have the day off, but there will be no diktat ordering it.

Her Majesty will be moved to the state funeral held at Westminster Abbey, culminating in a two minutes’ silence across the nation at midday.

She will then be taken to St George’s Chapel at Windsor Castle, where she will be buried in the King George VI Memorial Chapel next to her beloved husband Prince Philip.

It is not known when Prince Charles’ coronation will be held. But his mother the Queen was crowned four months after King George VI died.