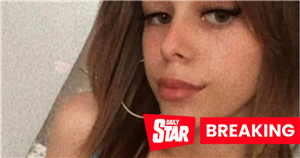 A monster musician obsessed with serial killers murdered an 18-year-old woman in the style of Ted Bundy after researching his victims' bodies.

Cody Ackland, 24, has been sentence to life behind bars for the horrific murder of student, Bobbi-Anne McLeod ,who he repeatedly whacked with a claw hammer at the bus stop she was waiting at.

Judge Linford told Ackland at Plymouth Crown Court on Thursday that he would not taste freedom again for a minimum of 30 years and 190 days.

Bobbi-Anne took a Snapchat photo of her feet by a bus stop yards from her home in Plymouth, Devon at 6.49pm on November 20, moments before being smashed in the head, PlymouthLive reports.

The 18-year-old was travelling to see her boyfriend when Ackland launched his evil attack and dumped her body on a cliff top at Bovisand near a beach.

Ackland said he approached Bobbi-Anne from behind at the bus stop and hit her from behind with a claw hammer. He said "that was meant to be it" but she looked at him so he did it again.

He said he then said he got in his car and was set to drive away but saw Bobbi-Anne sit up with blood on her head and bundled her into his car and covered her in a jacket as she fought for her life.

Having driven to Bellever Forest, Bobbi-Anne told her attacker that she was scared to which he replied "so am I, I've never done this".

Ackland said he 'knew what he had to do' so hit Bobbi-Anne with the hammer 12 times, and even thought "hats off to her" when she was still breathing until he burned her belongings and stamped his foot on her throat.

Ackland spent the following day acting as though everything was normal with pals and even seemed "happier than usual".

He later told a psychiatrist that previous feelings of depression had gone following the murder.

Mr Posner, for the Crown Prosecution Service, told the court how Ackland had "disturbing and dark" images on his phone from horror films, showing a "deep rooted fascination in death".

Days leading up to the attack, Ackland browsed the internet for information on dead bodies linked to serial killers and he also searched for remote location on Dartmoor and DIY stores for hammers and other weapons.

He went for an early lunch from the valeting company where he worked and went to the police station. He text fellow band members and family saying he loved them.

On the Tuesday Ackland handed himself in at Charles Cross police station on November 23, and told the reception worker "I did it" before telling officers how to find Bobbi-Anne's corpse.

Detectives found Bobbi-Anne's naked body in the undergrowth, 15 feet down an embankment, showing evidence of numerous injuries consistent with a prolonged and frenzied attack.

The murderer denies anything sexual happened.

Bobbi-Anne's mother paid tribute to her daughter in court, describing her as "kind, loving, loyal".

She heartbreakingly told Ackland: "To know her final hours were spent being tortured kills us inside. Not being there for her and able to comfort her makes us feel like we have failed her."

Senior investigating officer Detective Inspector Stephanie Blundell, of Devon and Cornwall Police, said of Cody Ackland’s sentence: "I would like to commend Bobbi-Anne’s family – Donna, Adrian and Lee – for the strength, courage and resilience they have demonstrated throughout the investigation process and in particular, today’s hearing.

“The senseless and evil acts of one man have devastated their lives and I hope that today’s outcome brings them a sense of justice."