Yesterday, a dream team of 13 cave divers and five Thai Navy SEALs helped give four of the kids their first breath of fresh air in 15 days. 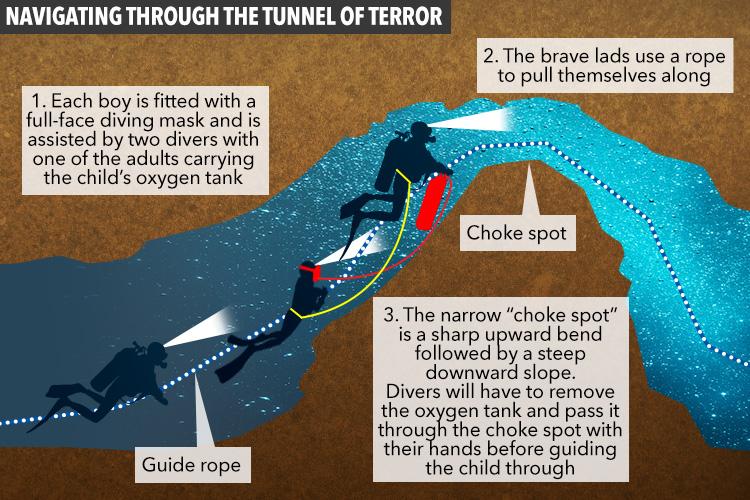 Following confirmation that a fifth child has been saved this morning, a witness has said that the sixth and seventh boys have also been stretchered from the flooded complex.

Ambulances with flashing lights have been seen leaving the cave area hours after the rescue operation resumed at 11am local time this morning.

Despite overnight rain showers, Thai authorities say the downpours did not change water level in cave.

Sunday's near-four hour rescue bid, led by British divers, has been described as a “masterpiece” and saw the children swimming through the deadly tunnel network which claimed the life of a Navy SEAL last week.

They were guided out by two scuba divers each wearing full face breathing masks but are now being kept away from their parents over potential risk of infection, officials said.

WHAT WE KNOW SO FAR 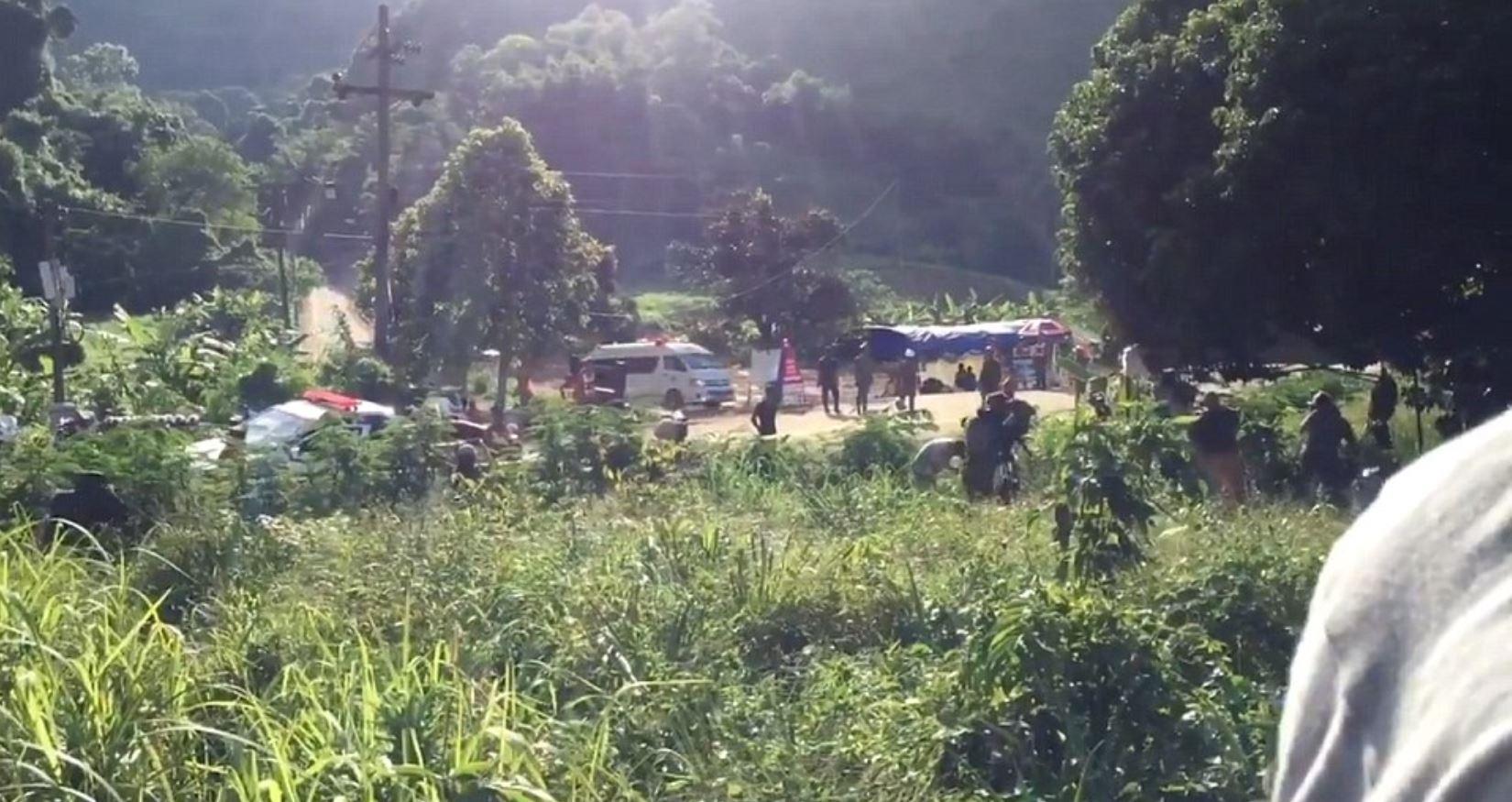 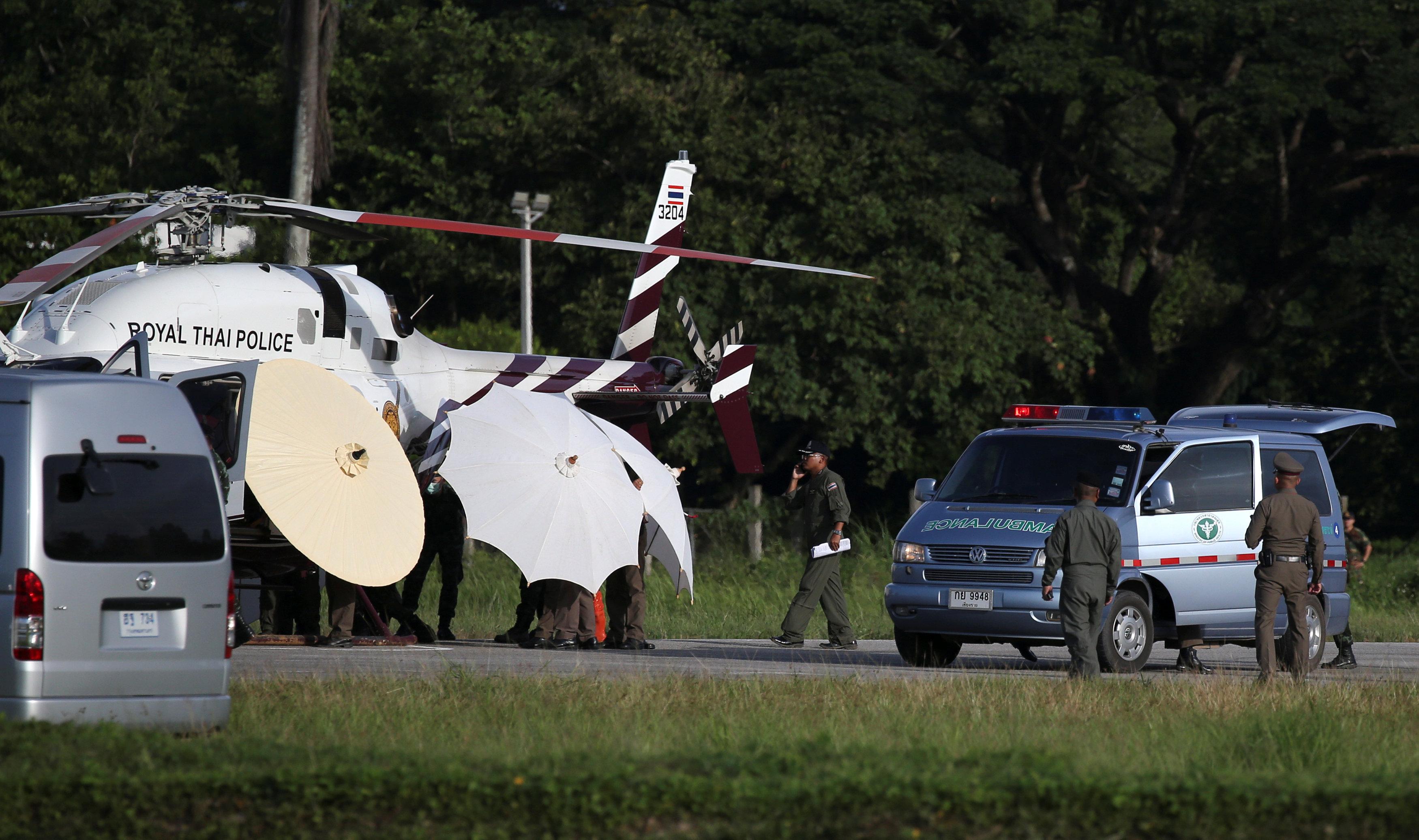 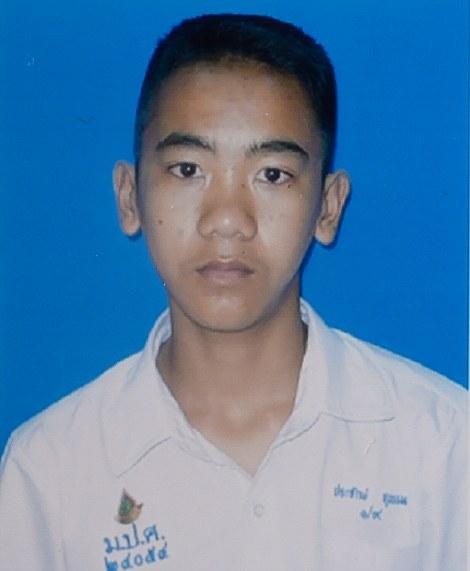 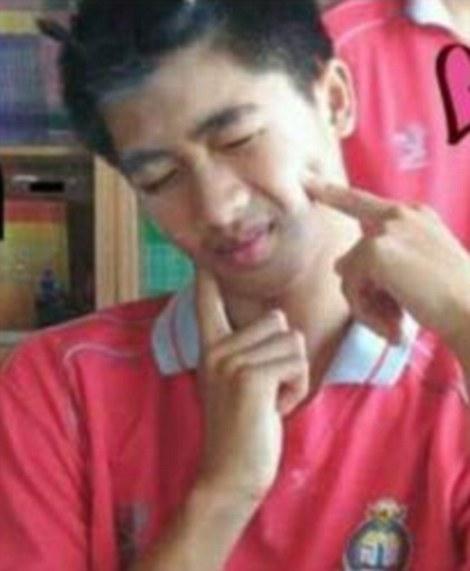 Rescue mission chief Narongsak Osottanakorn said the four boys who were saved on Sunday were in good spirits despite being hungry.

He said: “They are well and happy. This morning they complained that they are hungry and they asked for fried basil with rice."

Speaking at a news conference earlier today, Osatanakorn said: "All conditions are still as good as they were yesterday.

"The boys' strength, the plan today, we are ready like before. And we will do it faster because we are afraid of the rain." 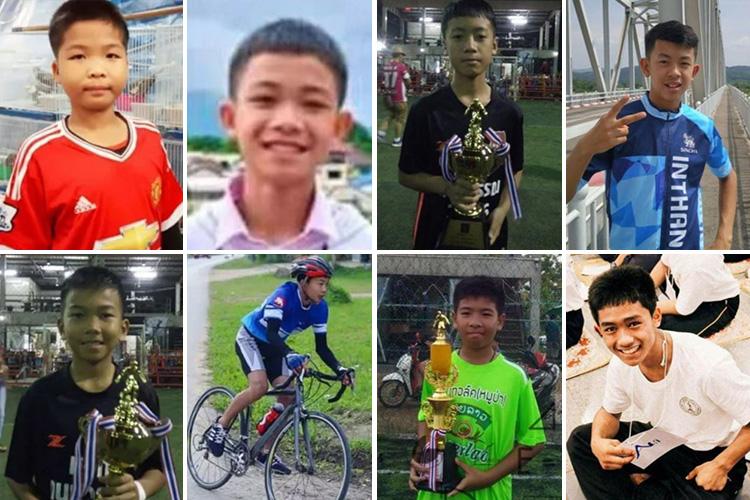 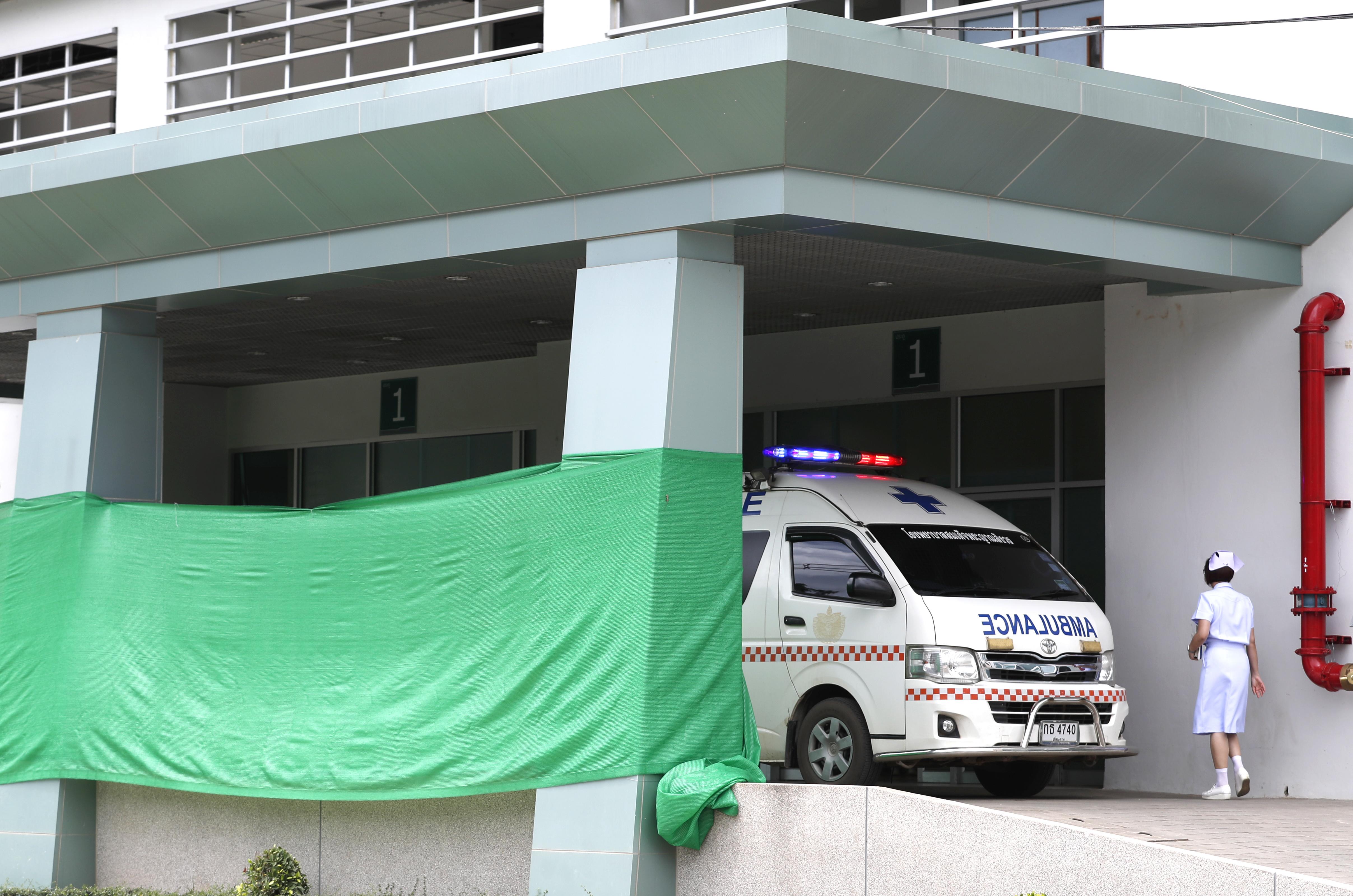 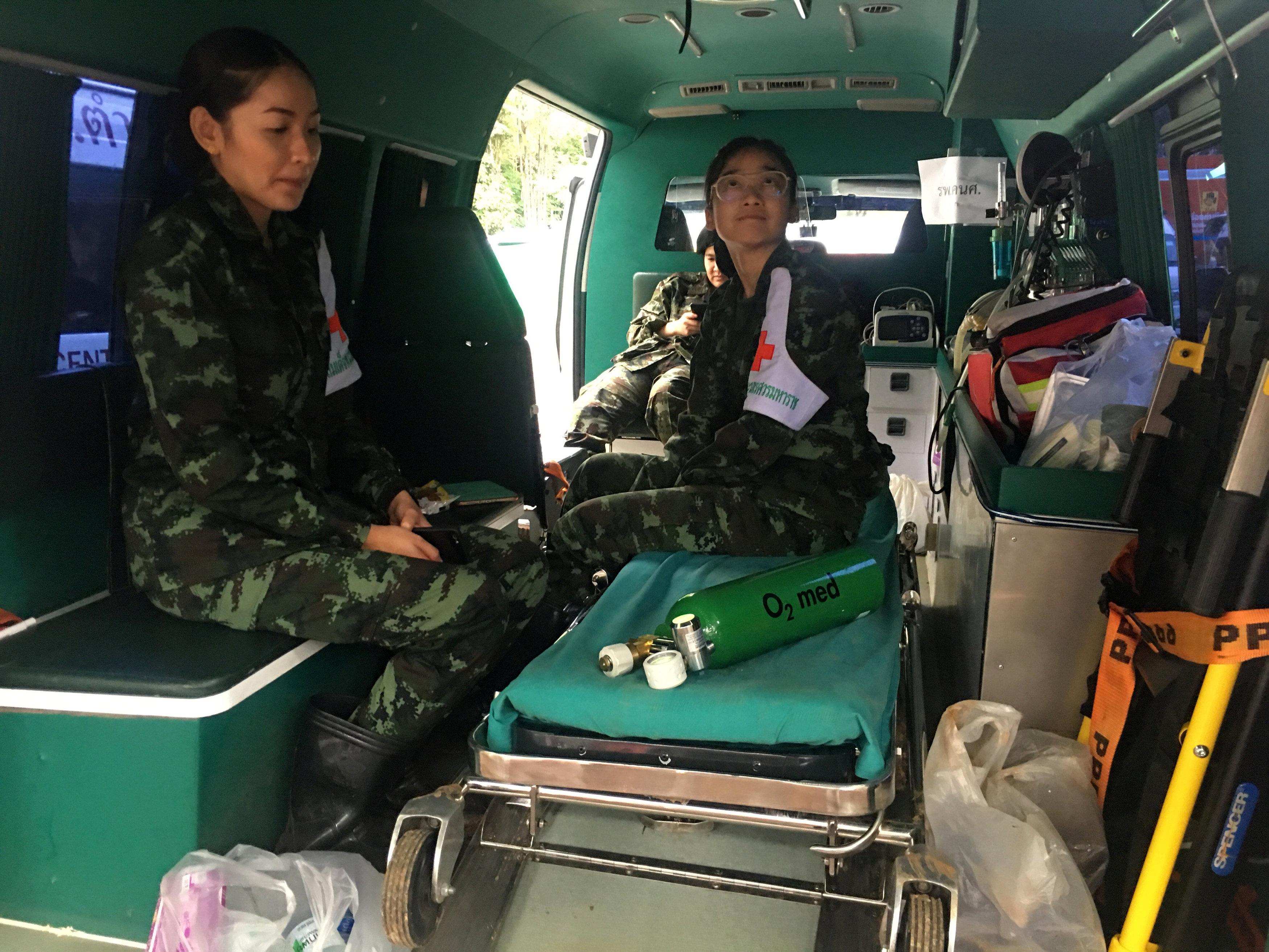 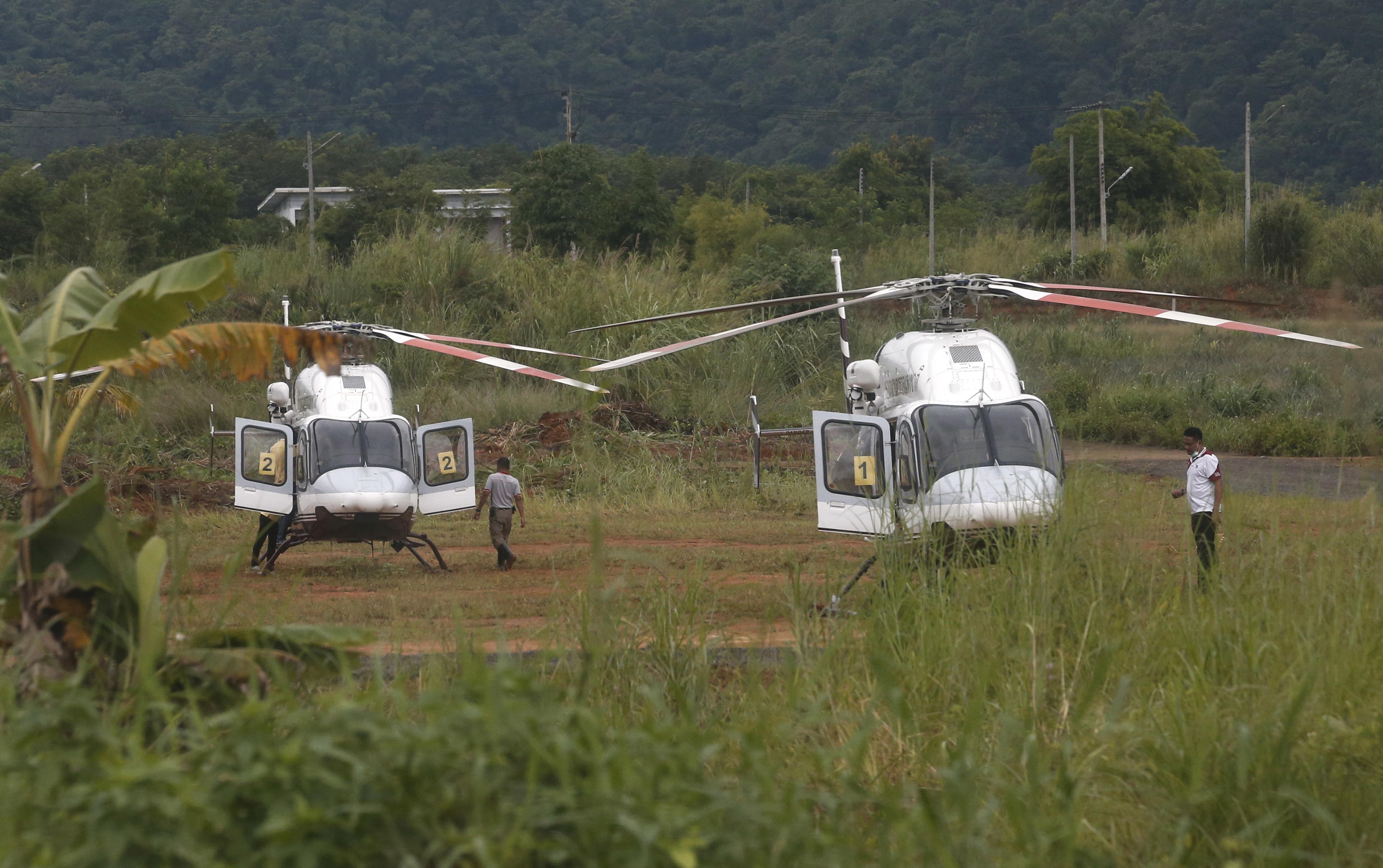 Monhkhol, also known as Mark, was the first to taste freedom before being followed by "quiet but sport-loving” Prajak.

Third out the cave was asthma-sufferer Nattawoot whose parents lost a a baby daughter to cancer.

Last out was Pipat, also known as Nick, who was not even a member of the football team but came along with his pal who is the goalkeeper.

Three were airlifted to Prachanukroh Hospital in provincial capital a Chiang Rai yesterday evening while another was driven in hospital. 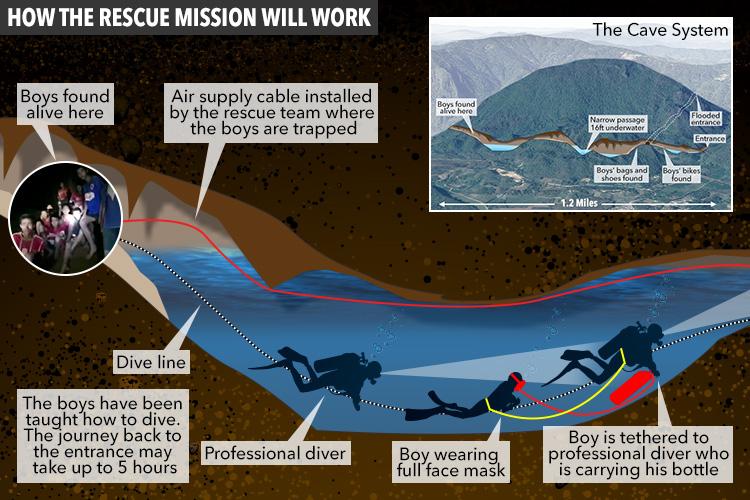 Thai Navy SEALs posted after the successful first leg of the operation: “Tonight we can sleep well.”

After the four were pulled to safety, rescue efforts in the Chang Hai province were stopped because divers used all of their oxygen tanks.

They had been working for hours, during a gruelling operation that began just after 10am local time and finished just before 7.45pm.

At least nine ambulances loaded with stretchers and blue oxygen tanks waited in the cave area this morning.

The mood was fairly relaxed among the soldiers, medics, engineers and volunteers in yellow shirts that milled around. 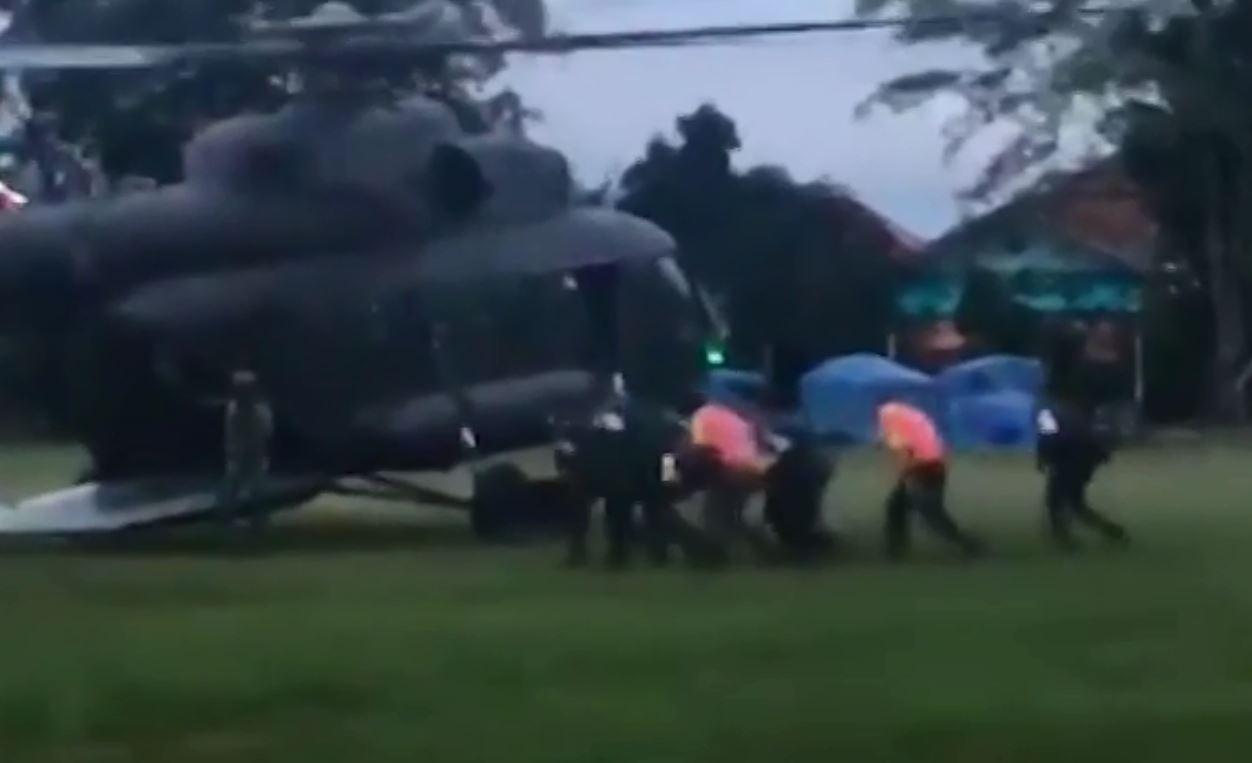 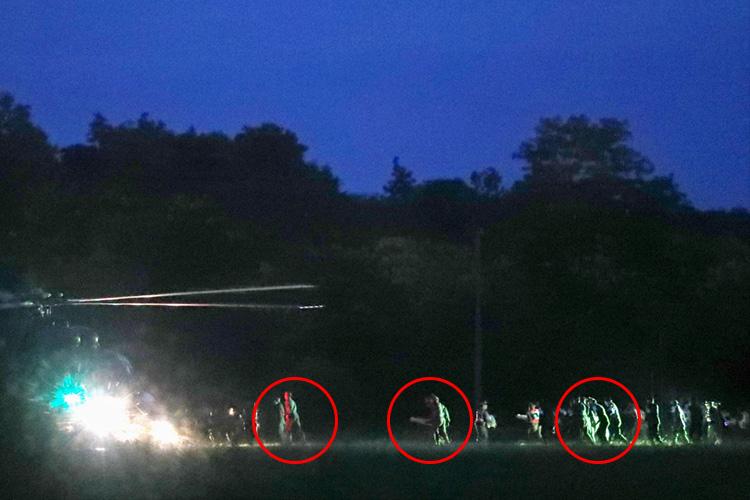 "I feel very happy, everybody is happy," said Hnin Jaiwong, the mother of one of the trapped boys, 13-year-old Sompong Jaiwong.

"I don't know if he is out, they didn't tell us," she said as she rested in a hut close to the mouth of the cave.

A source inside the Chiang Rai Prachanukroh hospital where the first four boys are being kept said their condition was "not bad" but doctors were watching for signs of conditions such as hypothermia.

The operation to save the other eight boys and their 25-year-old coach is now underway.

It is hoped that by Tuesday all members of the Wild Boars will be back to safety. 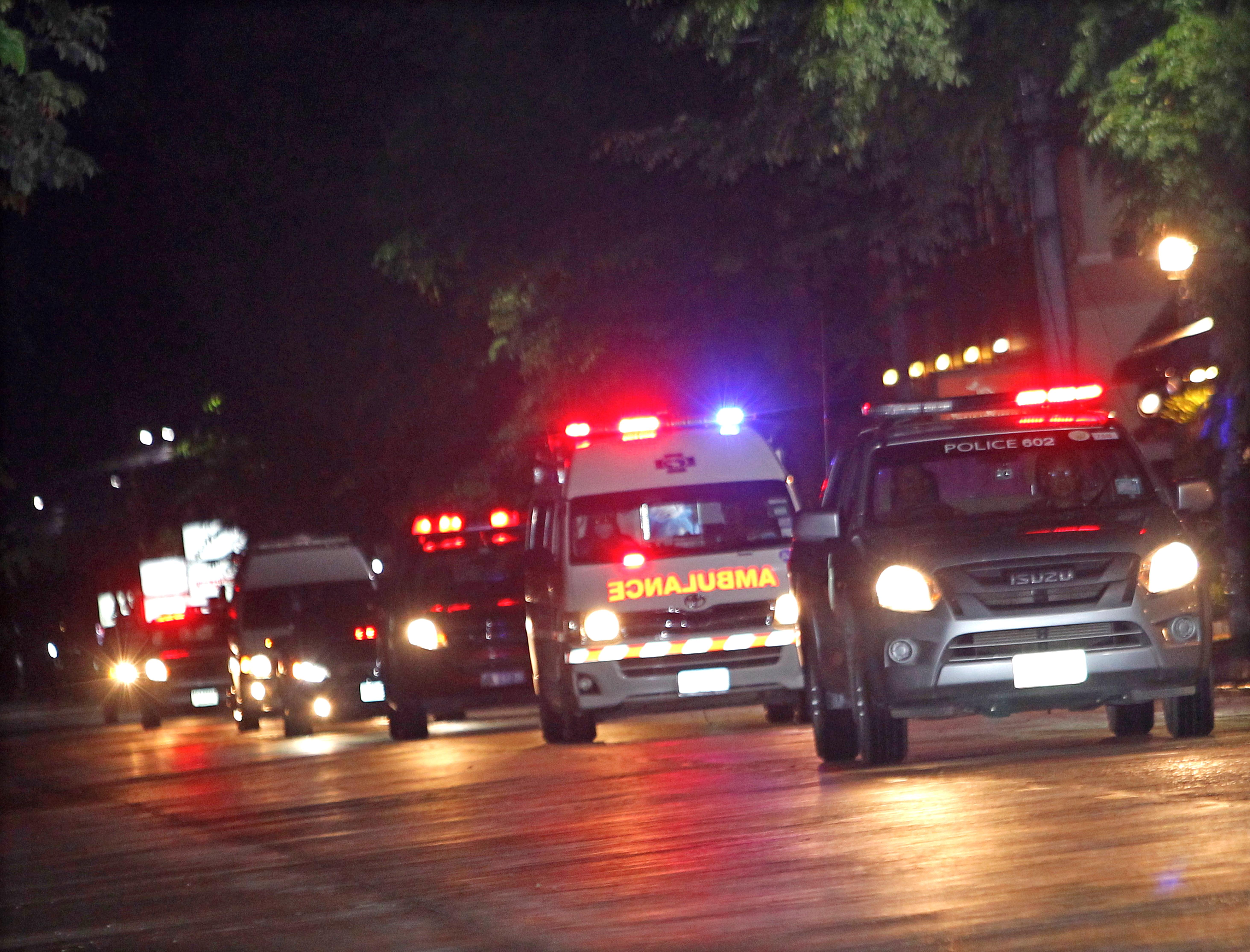 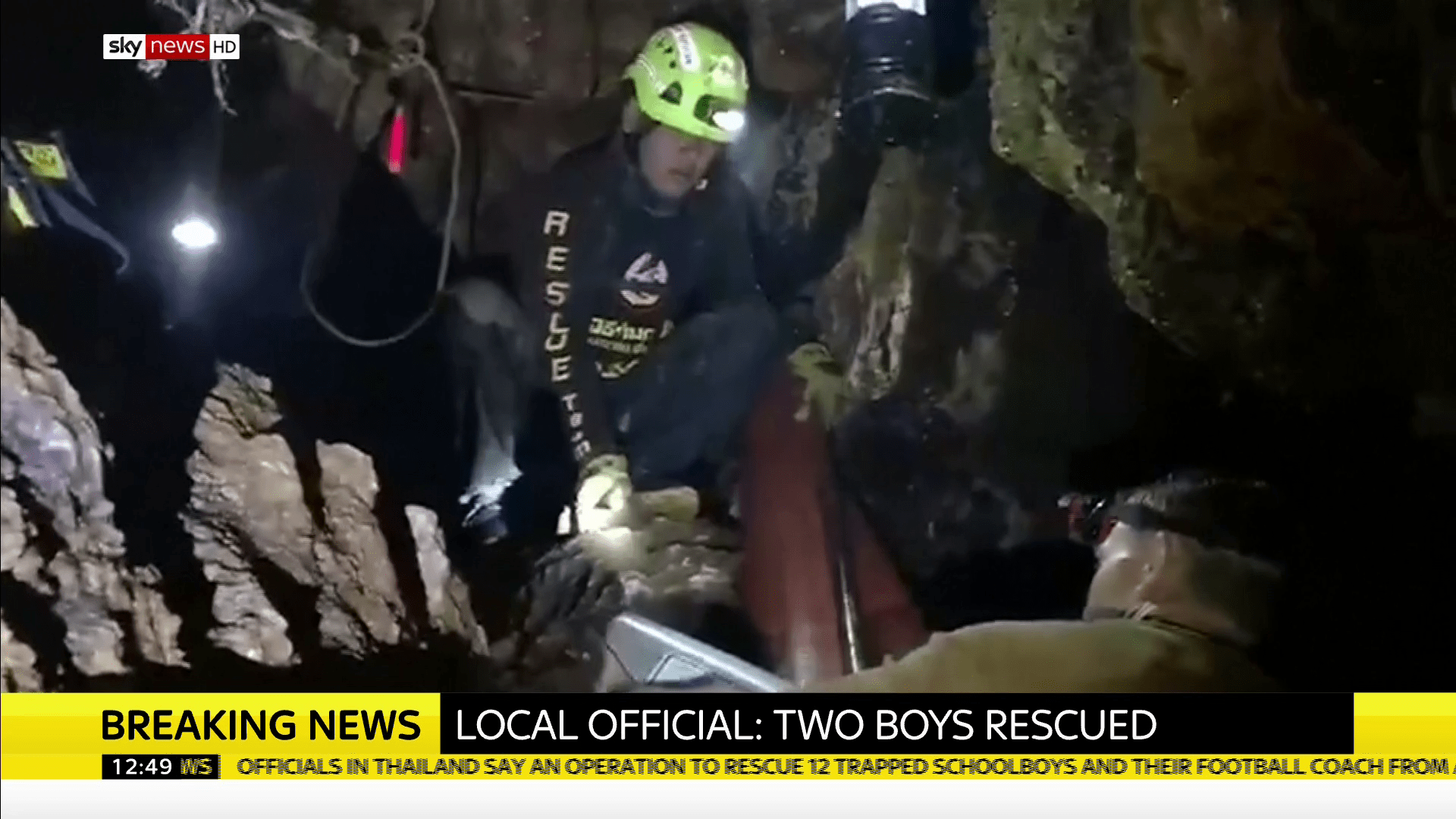 Officials made a move to get them out after rain set in – with torrential monsoon downpours forecast for the coming days.

Governor of northern Chiang Rai province Narongsak Osottanakorn said rescuers were in a “war against water”.

He said: “The fear was that if we didn’t move now the rain would gush down the mountain and fill the cave leaving the boys in an even worse situation than there in in the first place. 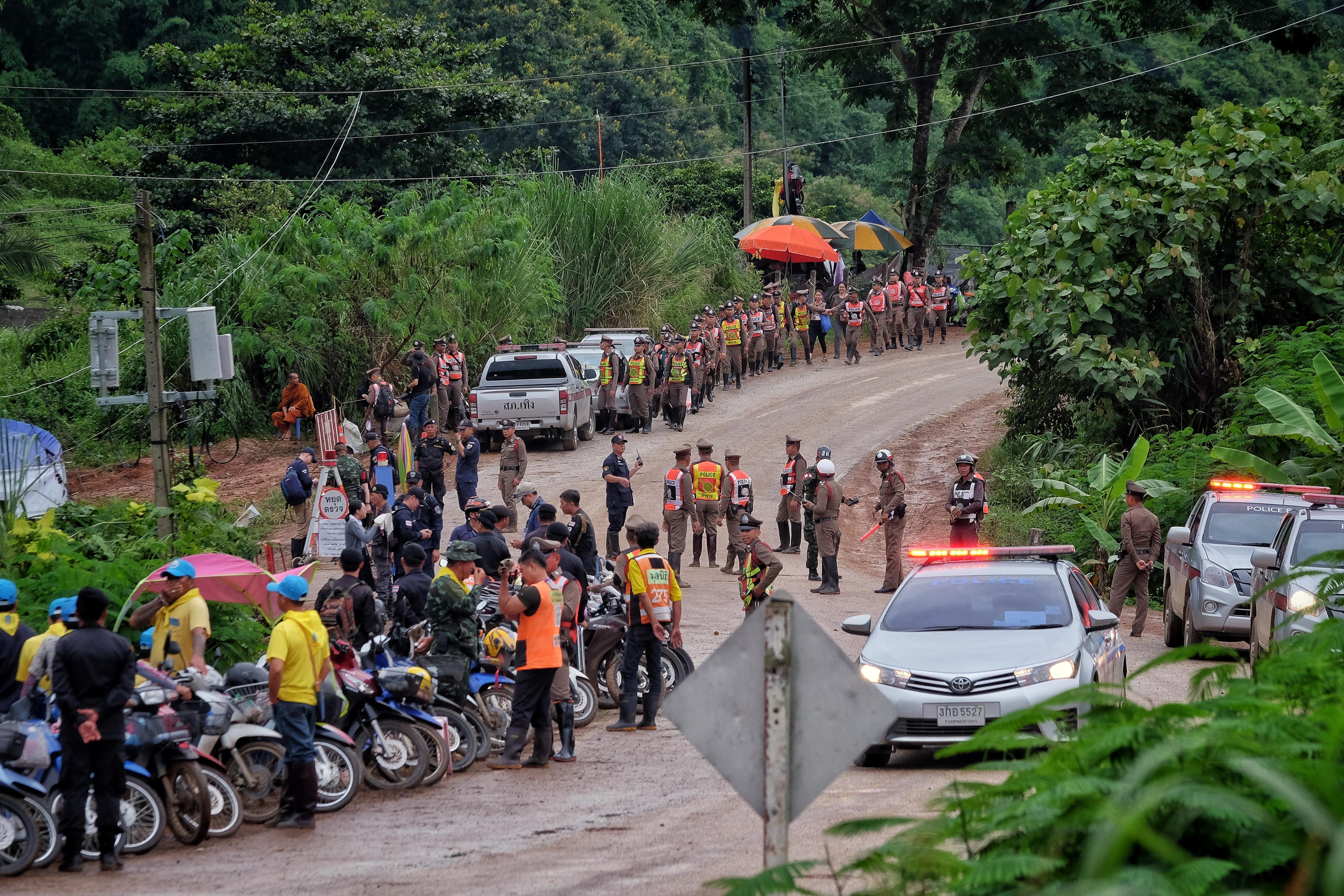 “The divers are all international all-stars and we selected five our best to help them.”

Australian doctor Richard Harris checked the boys on Saturday and gave them the all clear before they were evacuated.

According to local media, Dr Harris convinced officials to change the rescue plan and bring the weakest lads out first – because he feared they may have not survived in the cave much longer.

Reporters and camera crews were moved away from the area around the cave early yesterday morning.

Parents of the kids had to sign a waiver agreeing to let their kids be rescued. 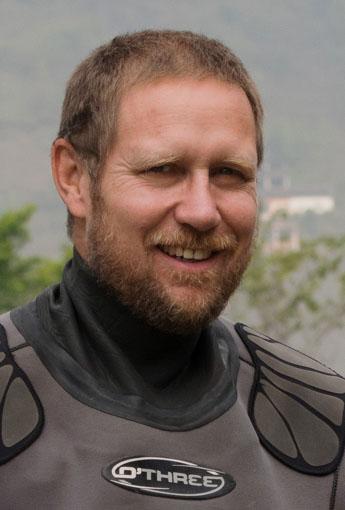 On Friday a former Thai Navy SEAL diver died while taking part in the mission.

The effort to free the boys from the cave has attracted experts from all over the world including the USA, Europe, Australia, China and Japan.

US president Donald Trump tweeted: “The U.S. is working very closely with the Government of Thailand to help get all of the children out of the cave and to safety. Very brave and talented people!”

Before the rescues began, American tech billionaire Elon Musk had his SpaceX engineers working on a “tiny, kid-size submarine” constructed out of parts from a Falcon 9 rocket.

The remaining nine-strong party will endure another long wait in the dark and dank caves before rescuers can bring them home.

The first four were saved by elite divers just after 1pm UK time.

Each rescued boy has made the arduous journey through the murky water of the cave network with the help of two elite divers.

It is thought the lads swam through 1km of water, and walked through other sections of the tunnels, as they finally returned home after 15 gruelling days. 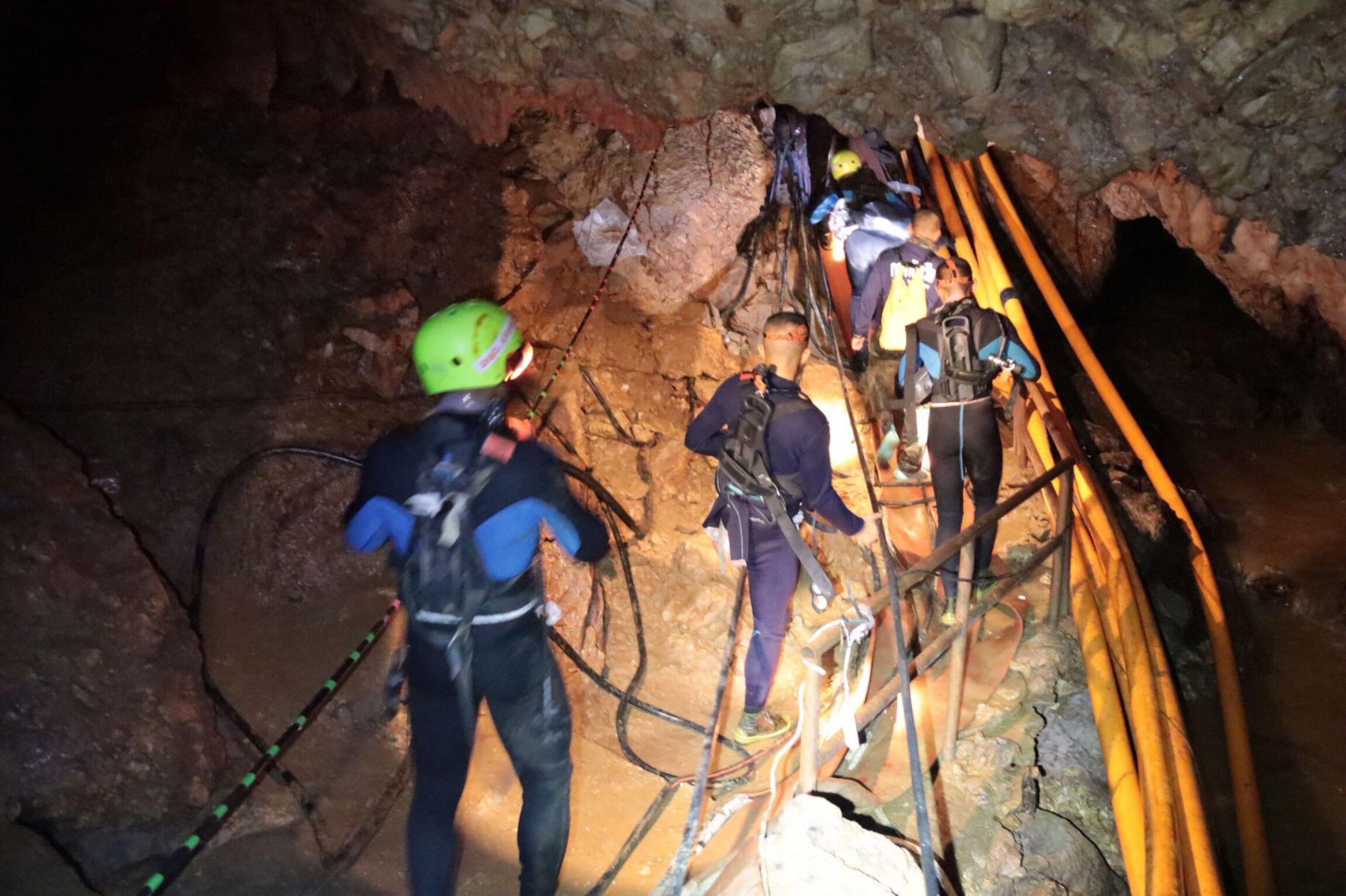 The boys received treatment at a field hospital, next to the mouth of the cave network, before being taken to a nearby facility for further treatment in Chang Rai.

After the first two boys were saved today, Tossathep Boonthong, chief of Chiang Rai's health department, said: "Two kids are out. They are currently at the field hospital near the cave.

"We are giving them a physical examination."

Thirteen separate medical teams are on site – each with a helicopter and ambulance – to offer emergency treatment to each boy and their coach. 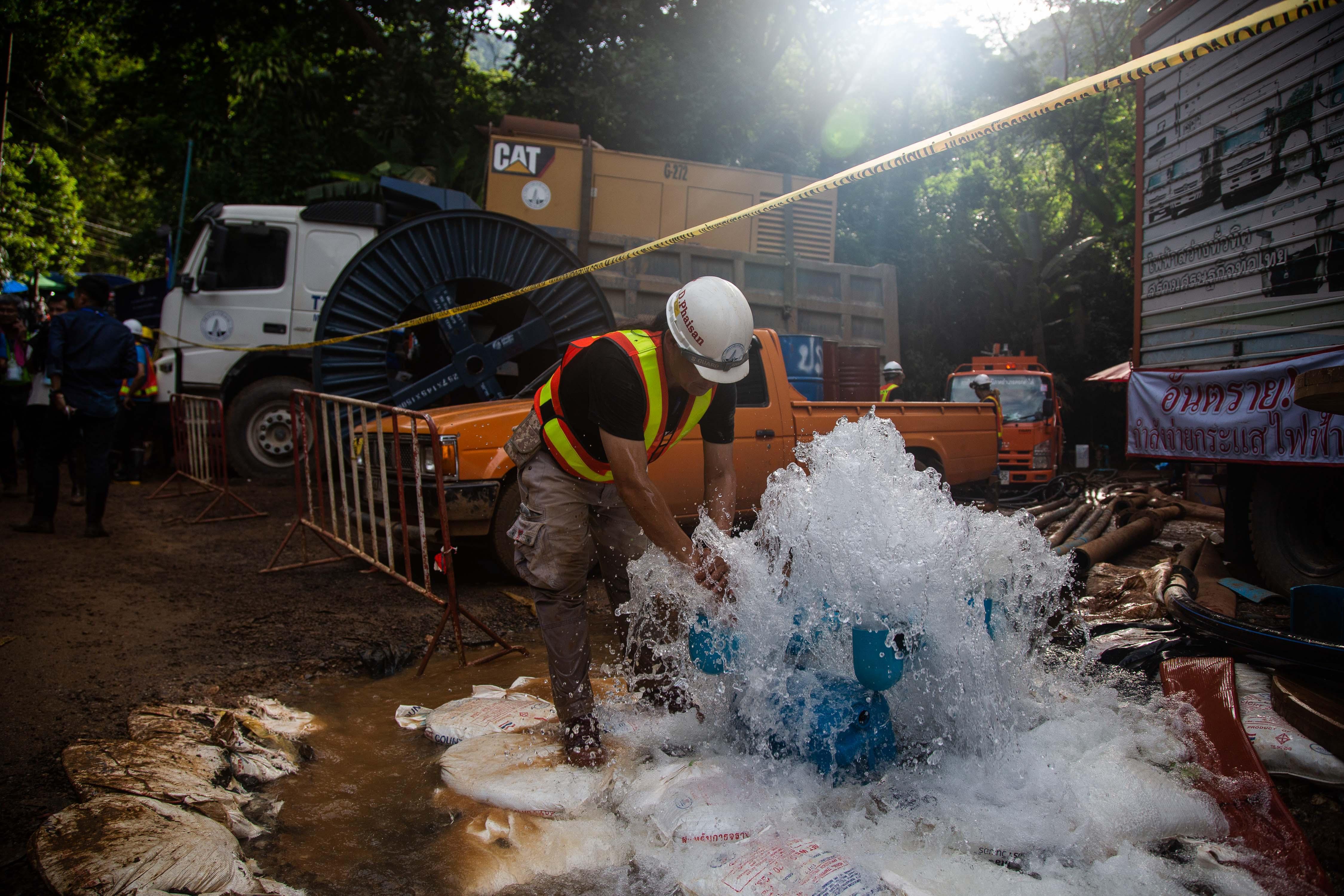 The rescue crews searching for their friends comprises of 13 foreign divers, including seven Brits, and five Thai, who entered the cave at 10am local time today.

To escape, the boys must swim through dark, narrow passageways sometimes no more than two feet wide, that have challenged some of the world's leading cave divers.

A rope system has been put in place to help the boys over difficult ground.

Osottanakorn told reporters: "Today is the D-day. The boys are ready to face any challenges."

He added that conditions were currently "perfect" but there are fears monsoon rains and further flooding could follow. 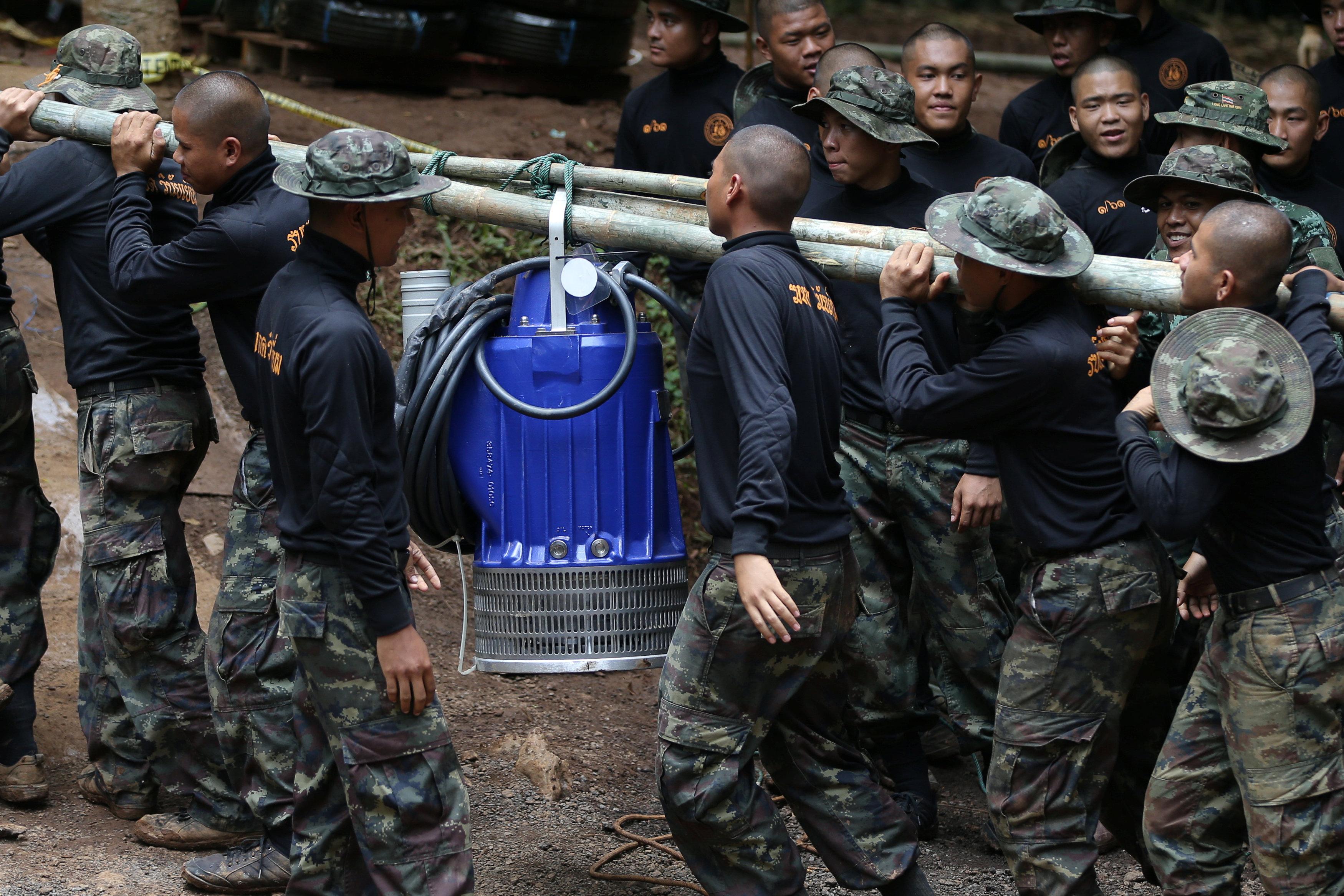 Osottanakorn said: "Now and in the next three or four days, the conditions are perfect [for evacuation] in terms of the water, the weather and the boys' health."

Authorities have said it takes roughly 11 hours to do a round-trip from the cave entrance to where the boys are huddled on a muddy bank.

While they waited to be saved last week, the trapped boys sent tear-jerking letters to their parents pleading with them not to worry.

Delivered by divers on Friday, the notes told their families that they were being well looked after.

His proud Dad John said: "We are not surprised that Tim was asked – or that he volunteered to help without a second thought.

"Tim has always looked for a challenge and wanted to help."

One of the youngsters even joked about not forgetting his birthday and called the Thai Navy Seals looking after them their "brothers". 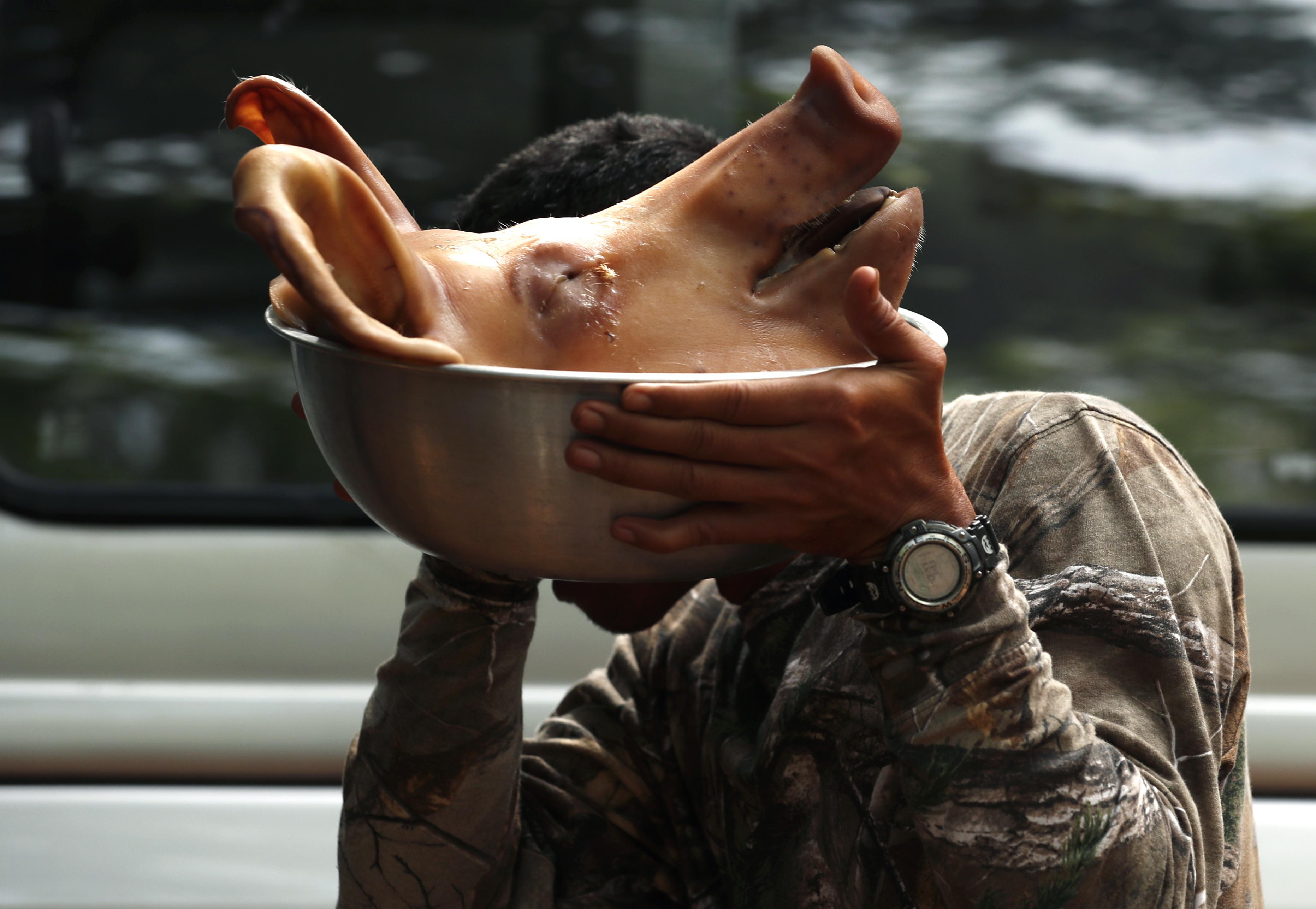 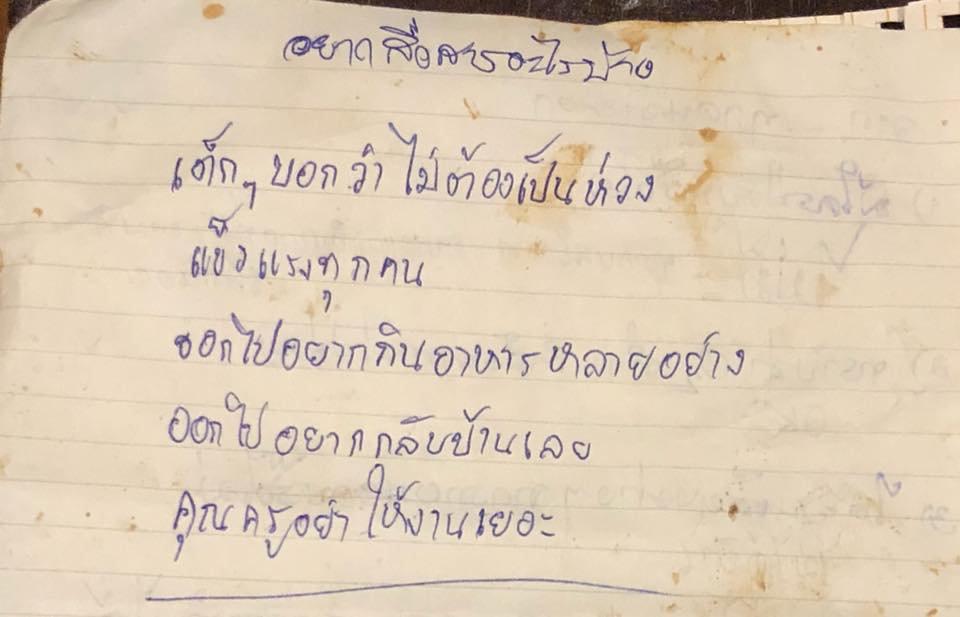 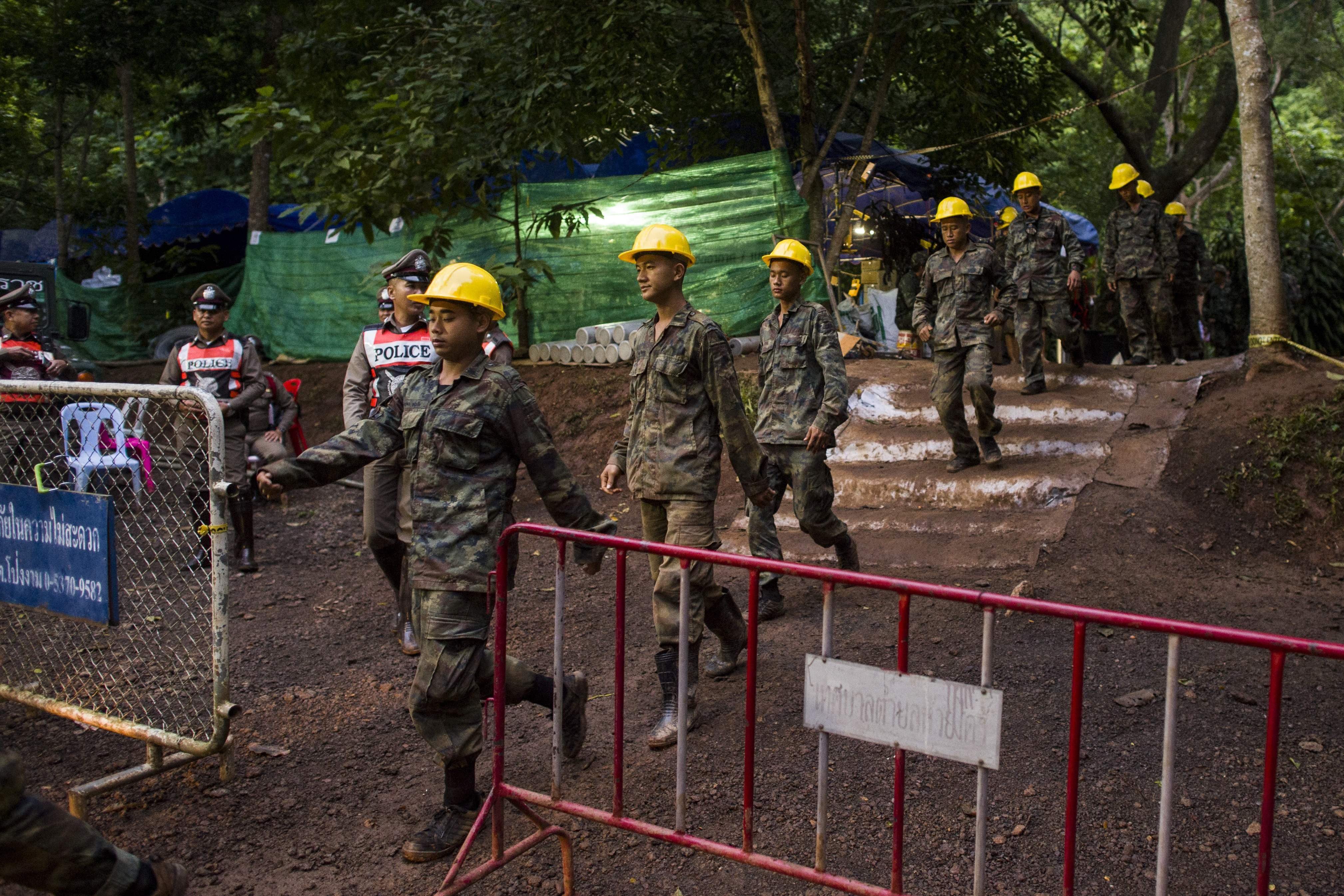 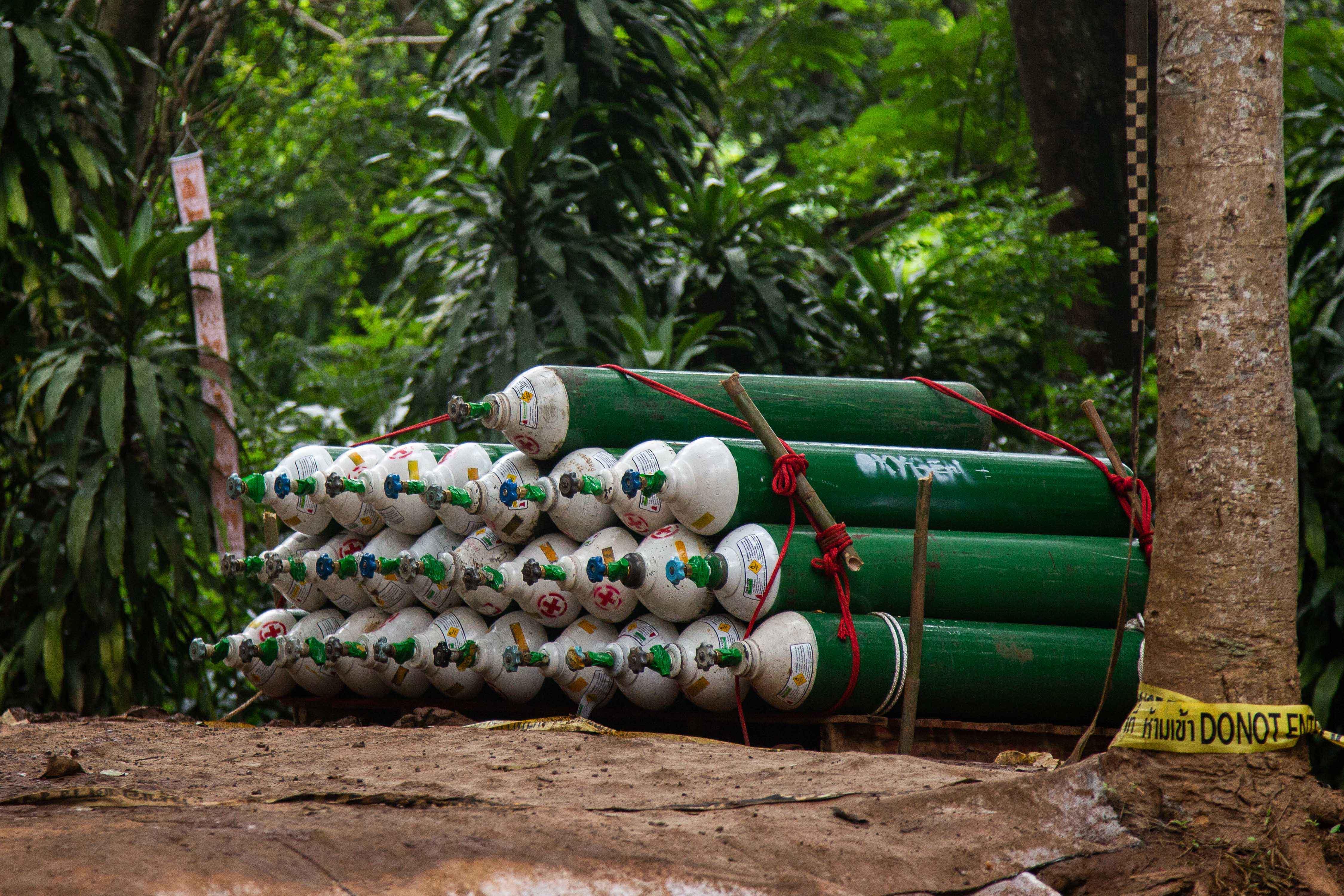 In the collective letter from all 12 children they say they want to go "straight home".

Panumas Saengdee, 13, wrote: "I miss everyone. I miss grandpa, auntie, mum, dad and all my brothers and sisters."

And Duangphet Promthep, also 13, wrote: "I am good but it's a little bit cold here. Don't worry about me. And don't forget to organise a birthday party for me." 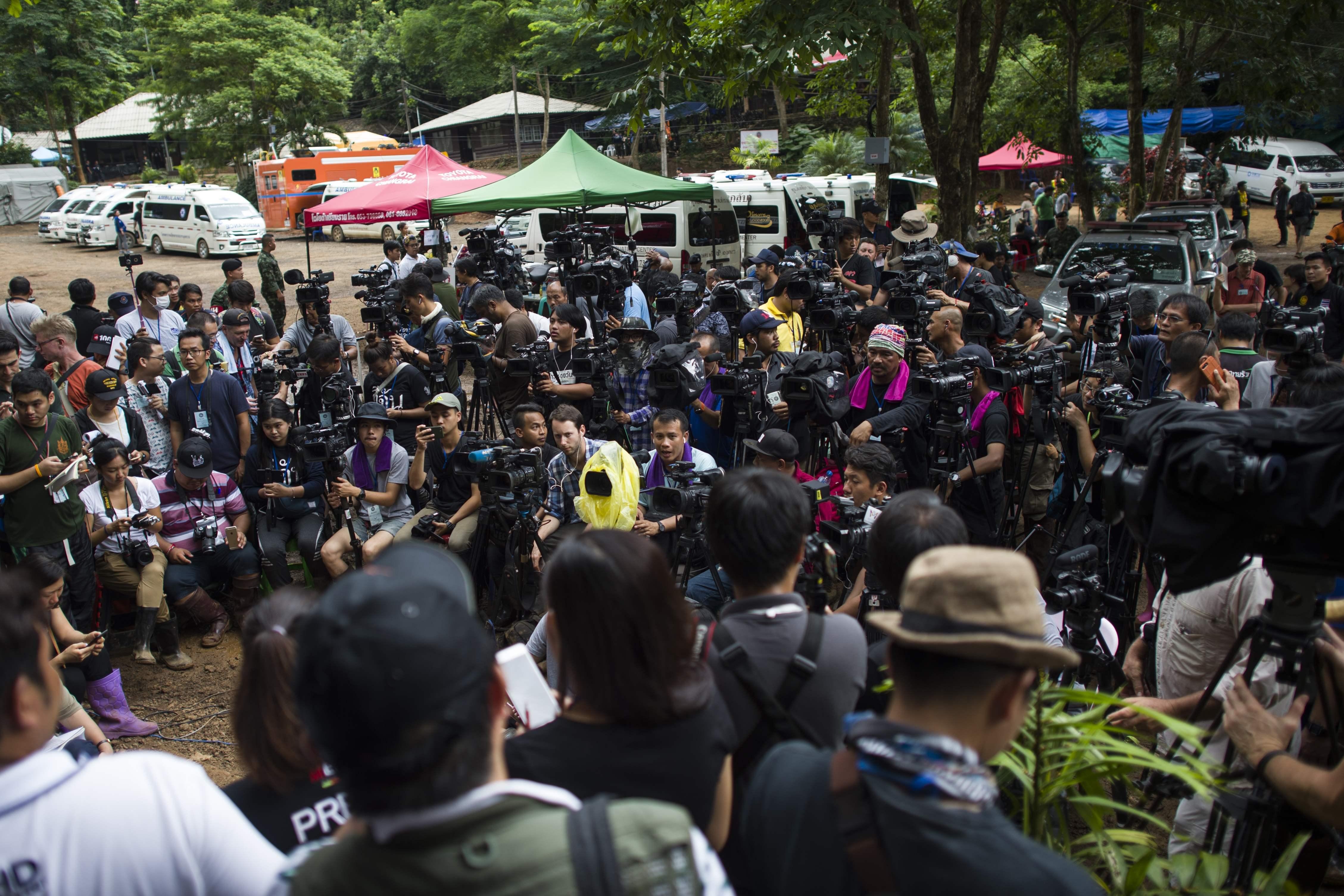 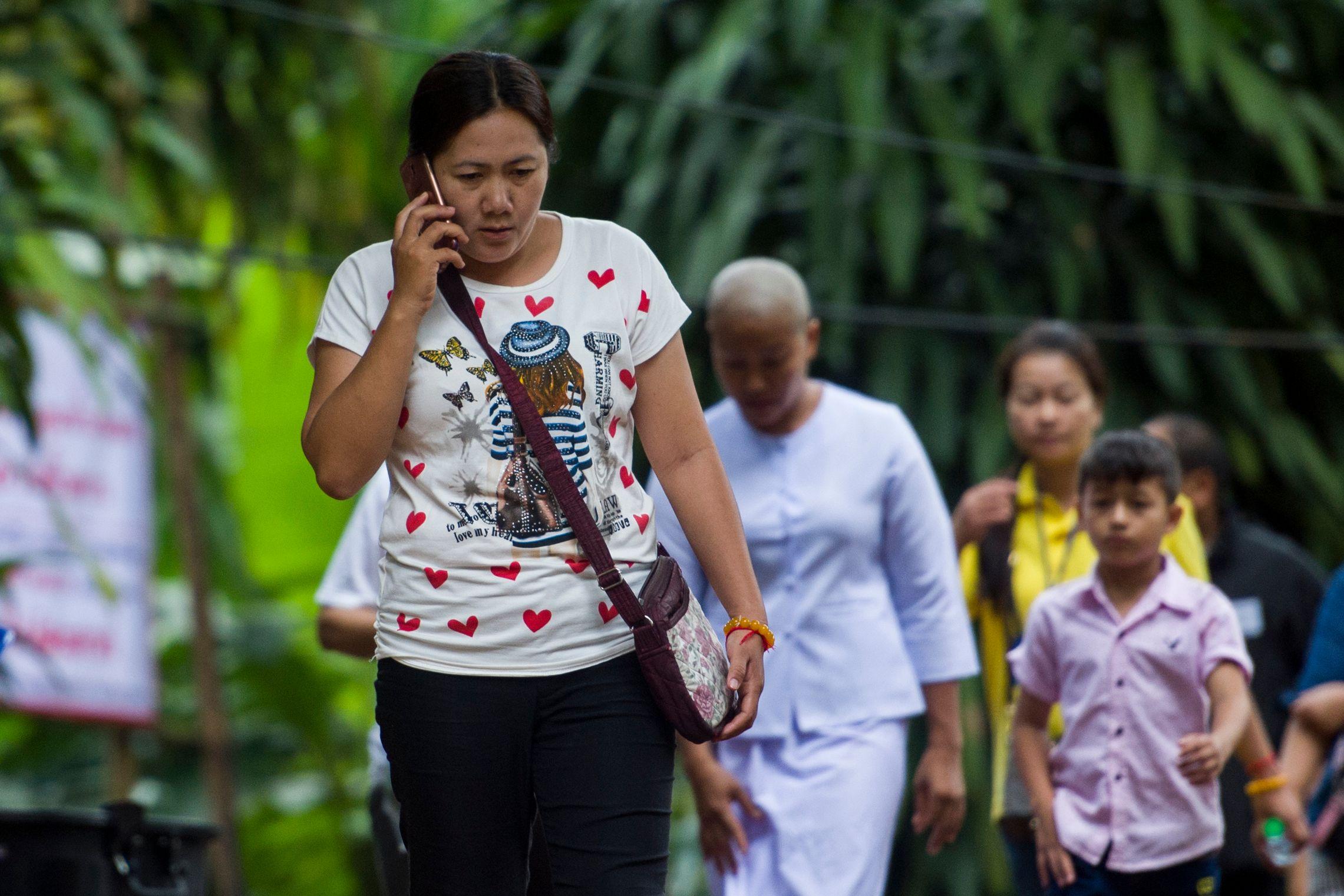 It comes as the coach who organised the ill fated trip has apologised to the boy's parents.

Ekapol Chanthawong, the 25-year-old coach of the Wild Boars football team, wrote: "To the parents of all the kids, right now the kids are all fine, the crew are taking good care.

"I promise I will care for the kids as best as possible. I want to say thanks for all the support and I want to apologise to the parents."

Rescuers drilled more than 100 shafts through mountain rock as they desperately tried to reach the trapped footballers.

However, sadly the mission has already claimed one life.

Former Thai Navy SEAL Saman Kunan, 37, died after running out of oxygen as he returned from delivering air tanks to the flooded cave.

The boys, 11 to 16, and their coach went exploring in the cave after a football match on June 23.

Monsoon flooding cut off their escape and prevented rescuers from finding them for almost 10 days.