Shame of Spanish greyhound deaths: Up to 50,000 dogs face terrifying fate of being thrown down wells, tied to rail tracks or dumped by busy roads as nation’s hunting season draws to end

Thousands of greyhounds are facing terrifying deaths after being thrown down wells, tied to railway lines or abandoned next to busy roads as the end of Spain’s hunting season approaches.

Selfish pet owners discard the working dogs, known as galgos, so they do not have to pay for food to keep them alive after the season ends.

Animal welfare campaigners estimate that Spain has 200,000 registered galgueros, who own up to ten dogs each, and that up to 50,000 greyhounds are abandoned at the end of each season.

Charities struggle to cope with the influx of abandoned dogs, many of whom are either left to fend for themselves or taken to kill shelters.

Others are left to die down wells, with cruel owners blocking up the entrance with wood so there is no chance of escape. 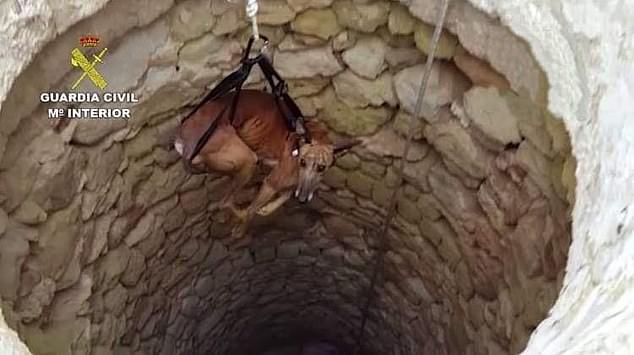 Thousands of greyhounds are facing terrifying deaths when owners abandon them at the end of Spain’s hunting season. One such dog, pictured, was thrown down a well

The working dogs, known as galgos, are often abused and left with horrific injuries (pictured). Many are left to fend for themselves, or taken to kill shelters 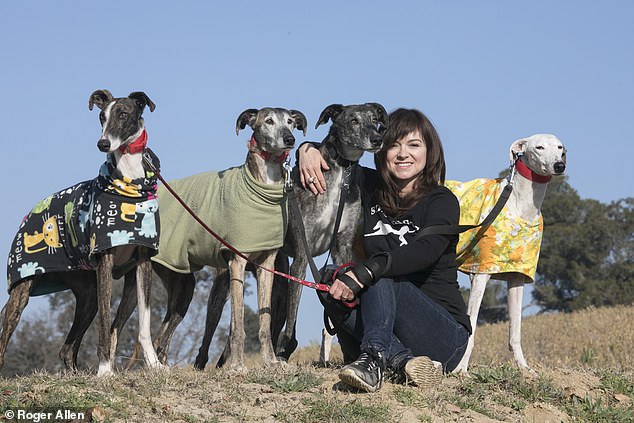 Anna Clements, pictured, is leading a campaign to save the greyhounds. She runs the SOS Glagos rescue centre in Barcelona with her husband

Anna Clements, who is leading a campaign to save the greyhounds, said: ‘This is Spain’s dirty secret and something tourists rarely see.

What is the Spanish hunting season?

Spain’s hunting season for small game runs between mid-October to early February, and anyone caught hunting outside of this time will be prosecuted.

Hunters go after animals including grouse, pheasants, geese and rabbits. Galgueros use the greyhounds for hare and lure coursing.

Hare coursing is where the galgos run across an enclosed track or around the countryside to catch the animals, relying on sight rather than scent.

There are competitions in the sport across Spain, and dogs are ranked on their ability to overtake and turn a hare. The controversial sport is illegal across the UK.

‘We are expecting an influx of thousands of abandoned dogs but we, and other charities, cannot cope. We cannot save them all.

‘They are brutally treated when the hunters have finished with them – some are thrown down wells and the well opening is blocked off with wood. But some survive and we had one recently who was saved when a passerby heard her cries.

‘She was lying in water at the bottom of the well, was badly malnourished and had deep gashes on her neck. The fire brigade was able to winch her to safety and she is now recovering with a family where she is a loved pet.’

Galgos, a member of the sighthound family and distant relations to British greyhounds, are used for hunting and for hare coursing, where two dogs compete to run down a hare over open land.

Dogs that perform poorly or do not adhere to a strict hunting code are thought to bring shame on their owners so they are savagely discarded. 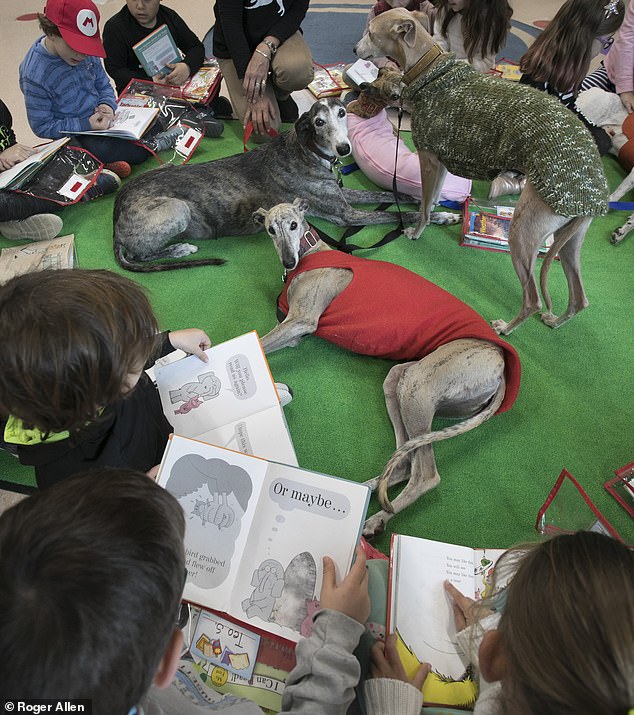 She said: ‘We are expecting an influx of thousands of abandoned dogs but we, and other charities, cannot cope. We cannot save them all’ 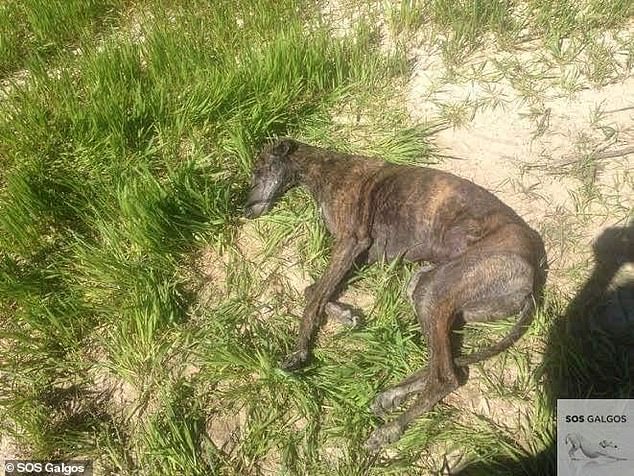 Many of the dogs she rescues are malnourished, having been left for dead by selfish owners who do not want to pay for their food after the hunting season is over

Galgos are regarded as working dogs and exempt from animal welfare legislation that covers pets.

‘They are often kept in dungeons in the dark for most of the day and fed poorly so they are more eager from prey when they are let out,’ added Manchester-born Anna, who know lives with her vet husband Albert in Barcelona where they run the SOS Galgos charity.

‘The lucky ones are found and have a chance – others are left to die, often alone, in excruciating pain.

‘Galgos are naturally calm, loving and gentle animals but they are deprived of all love and don’t know what that is. The ones that survive are deeply traumatized and have trust issues to begin with but we can re-home them and give them the lives they deserve

‘The glagueros used to hang dogs from bridges but that happens less now because they realise it reflects badly on them but they are regularly dumped at petrol stations, by the side of the roads and there was a case last year of someone tying 20 to a railway line that were all killed when a train came. 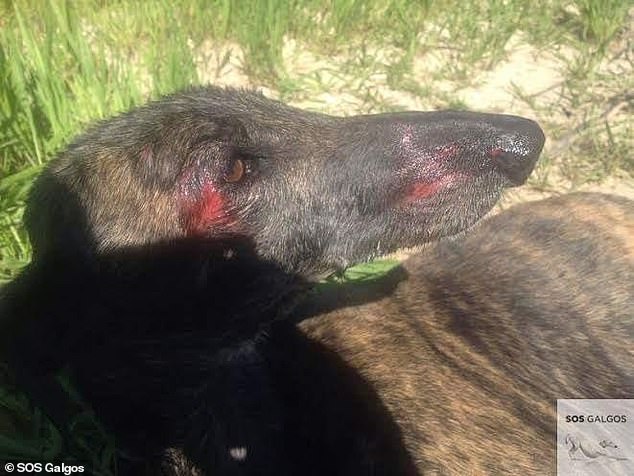 Mrs Clements added: ‘The lucky ones are found and have a chance – others are left to die, often alone, in excruciating pain’ 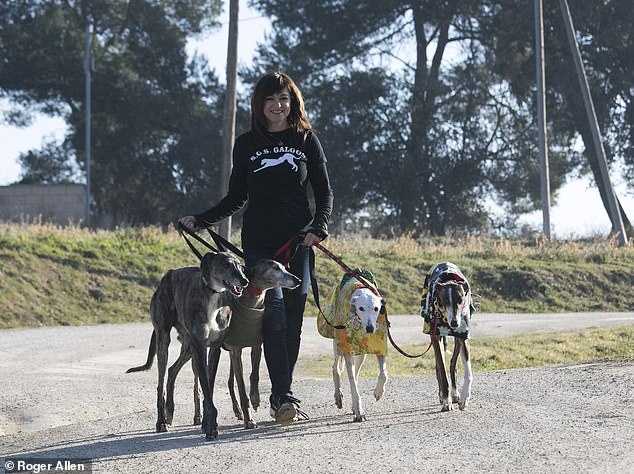 The dog pitched down the well near Toledo, around 60 miles south west of the capital Madrid, is now living with a family in Barcelona

‘This is a long held tradition in some rural areas and a lot of people are too afraid to speak out. This cruelty is not what tourists see but the government is slow to take action because the hunting lobby is so powerful.’

The dog pitched down the well near Toledo, around 60 miles south west of the capital Madrid, is now living with a family in Barcelona.

Another dog Naldo, who was abandoned by a hunter is now being cared for by Julie Marshall, in Solihull, Birmingham.

‘British tourists who have found out about the plight of galgos are very kind and generous to the cause,’ adds Anna.

‘But we need more funds to save these beautiful animals, get them into kennels and then adopted by families who love them.

‘We never get used to the levels of cruelty inflicted on these dogs and without us, and other charities, they will die.

‘We can only help the tip of the iceberg so the answer is a complete ban on hunting with galgos.

‘These hunters are a minority of the Spanish population but they are doing a lot of damage to the country’s reputation.

‘More people are becoming outraged by this brutal practice and schools are started to educate the next generation about animal welfare. But we are now entering the killing season for galgos and it is tragic.’