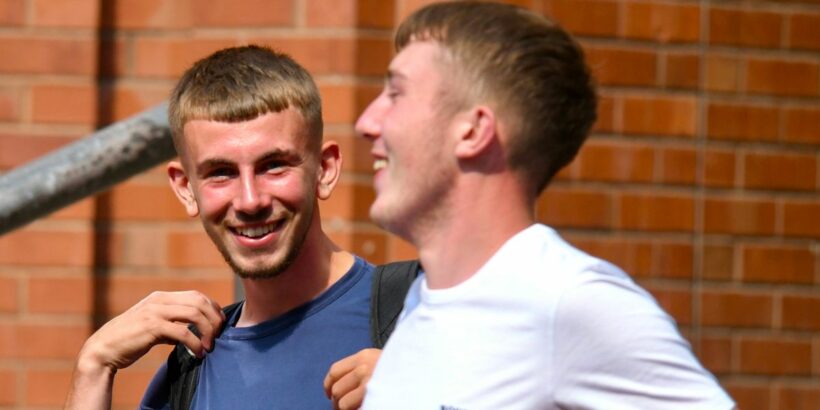 A pair of shameless teenagers were spotted pulling faces and dancing just minutes after they were spared jail for a late night burglary.

Elliott Boothby, 18, and Keiron Stewart, 18, were ecstatic as they walked free from Hull Crown Court following a house raid and high-speed chase in a stolen car.

The pals were warned that they would "never know" how lucky they were to evade custody after they both confessed to the crimes which took place on June 1.

However, they didn't seem to take much notice of the stark threat as they were spotted laughing outside of the court.

Ben Hammersley, prosecuting, said that the keys to a woman's VW Scirocco car were stolen during a burglary in Cottingham, after intruders entered while the occupier was watching TV.

The court heard how a wallet, containing bank cards and a driving licence, was also taken before they took off in her car before 1am.

Boothby drove the car at 70mph in 20mph and 30mph areas and a tyre-bursting stinger device was used.

It was reported that the car hit the kerb which caused it to spin before coming to a stop, reports Hull Live.

"Both defendants ran from the vehicle," said Mr Hammersley.

Boothby was found shortly afterwards hiding in a nearby garden and Stewart was discovered by a dog officer 25 minutes later in a wooded area.

He told police: "I will be faster next time. If I had been driving, I would have been faster."

In an earlier separate incident, Boothby broke into a garden shed during the night and stole fishing equipment valued at £1,100.

Entry was gained using a wheelie bin to climb over a high fence. He drank from a bottle of cider that he found and he was identified from DNA on the discarded bottle.

"It's a complete mystery to his mother why he has behaved the way he has. It's immaturity that has brought him before the courts today.

"He left his DNA at the scene and thought he had got away with it. He bitterly regrets his offending and recognises the impact his offending has on others."

Marc Luxford, representing Stewart, said that the teenager had struggled with drugs, mostly cannabis and some use of cocaine, and there had been troubles at home.

Boothby was given an 18-month suspended custodial sentence, 150 hours' unpaid work, 20 days' rehabilitation and a three-month monitoring order. He was banned from driving for one year.

Recorder Peter Makepeace QC told Boothby and Stewart: "That's your one and only chance. Don't let me down now. Please do not let me down because, if you do, I will find out."