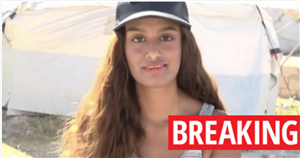 The former ISIS bride spoke from Syria with long flowing red hair and a dark baseball cap in a dramatic transformation from her previous appearance.

In a grilling from Susanna Reid and Richard Madeley, Begum denied any knowledge of the horrors caused by the Islamic State when she joined the terror group aged 15.

Begum said that if ISIS arrived at her current camp asking people to join or be killed, that she would rather die than return.

The woman from East London has had her British citizenship revoked on the grounds that she is a national security threat.

However Begum remains hopeful that she will return to the UK and help the government in its war against terrorism.

She said: "I think maybe yes there is a chance given the right opportunity and the government changes their mind about me."

When Susanna asked why the British public should forgive her, Shamima replied: "Because I made a mistake at a very young age, most young people don’t know what they want to do with their lives.

"I know it's very hard for the British people to try and forgive me."

When Susanna went on to describe ISIS as a "death cult," Shamima was adamant that she didn't know how bad ISIS was.

"I thought it was an Islamic community," she said, before continuing: "I think yes I was groomed and taken advantage of.

"The reason I came to Syria was not for any violent reasons, I did not want to hurt anyone in Syria or anywhere else in the world," she added.

Asked why she had decided to stay with ISIS, she said: "Because it was not possible to leave at all, you had to find connections.

"My husband, after he came out of prison, he was being watched very closely by ISIS. You also needed to have a lot of money and we didn't have access to any."

Begum said she deserves a fair trial in Britain and is prepared to go to jail if found guilty.

When asked what crime she has committed, Begum replied: "The only crime I have committed was being dumb enough to join ISIS."

Richard quizzed the former member of ISIS over her new look and whether it was just a PR exercise.

She replied: "I have not been wearing a hijab for maybe a year now i took it for myself because I felt it was restrictive.

"It's just for myself, it's for no one but myself."