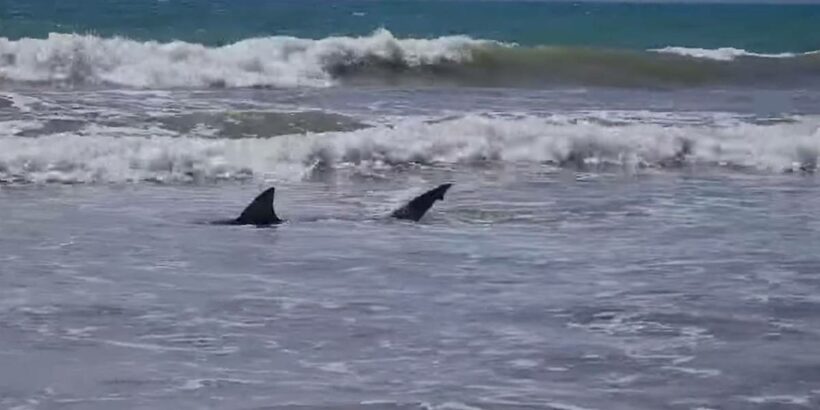 A large shark has been filmed swimming in water barely knee-deep at a Northland Beach.

The footage, posted to Facebook, and believed to be of a bronze whaler, shows the shark in the shore break at Tokerau Beach, near the Karikari Peninsula.

“Too close for comfort that,” one person commented.

Many commenting believed the shark could have been lured in by people leaving discarded fish parts on the shore.

The video comes amid a busy summer for shark sightings across the country.

With our recent sparkling summer conditions sharks have been spotted coming closer to shore to revel in the balmy conditions.

On Friday, swimming was not advised at three Auckland beaches after sharks were sighted.

They had been removed as of Saturday, but the Herald received a report from a reader of two sharks, measuring about two metres each, around Devonport Beach.

Dozens of bronze whalers – measuring about 2.5 metres – and around half a dozen hammerheads have also been seen in recent days swimming in the sparkling waters off Matarangi Beach in the Coromandel.

Hundreds of swimmers were forced out of the sea twice last weekend when several sharks were spotted at Pauanui Beach.

And just nine days ago Hamilton woman Kaelah Marlow, 19, died from injuries she received in a shark attack at Waihī Beach.

Surf Life Saving New Zealand’s national search and rescue manager Allan Mundy previously said the increase in sightings was understandable given conditions at beaches, but not a cause for panic.

“We are seeing more sharks than probably what we would normally see,” he told RNZ.

“But if we have a look at what is actually happening on the beach, we’ve got clear water at the moment, there hasn’t been a really big swell, so the visibility in the water is really good and we are seeing a lot more people down on the beach, walking and swimming, because of the Covid effect.”

He said the fact sharks were being spotted along the coast shouldn’t cause alarm as the predators – mostly bronze whalers and thresher sharks – were simply cruising and not feeding, he said.

“They’re pretty much doing what we would be doing, enjoying the warm water, basking and cruising. There’s not any real food source along the surf beaches.

“These sharks feed out to sea or in the harbours, where there’s lots and lots of food … If they’re hunting, they are in stealth mode.”

Clinton Duffy, a marine scientist at the Department of Conservation, previously told the Herald many people had the mistaken perception sharks were uncommon in our waters. But this was not the case.

However, attacks were uncommon but people should always swim between the flags, and never alone at a non-patrolled beach.

“For the most part, sharks are completely uninterested in humans, I’ve seen them myself swimming past people … taking no interest at all.”