And at Salon 94 Bowery – a chic gallery on Manhattan's lower east side – you will find a collection of paintings by Yukultji Napangati, an Aboriginal artist from the remote Gibson Desert in Western Australia.

The show, on public display until early March, is Napangati's first solo exhibit in the United States.

To have a standalone show in New York is a major achievement for any artist. But it is a particularly remarkable one for Napangati, who in the mid-1980s was one of the last Indigenous Australians to come into contact with the Western world. 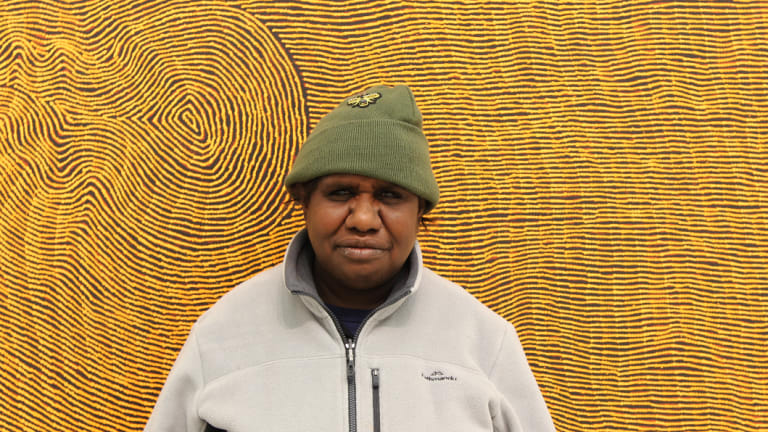 Yukultji Napangati has her first US solo exhibit on display in New York. Superstar musicians Jay-Z and Beyonce recently bought two of her paintingsCredit:Matthew Knott

Since her first Australian solo exhibit in Sydney in 2014, Napangati has experienced a stratospheric rise to become one of the country's most celebrated Aboriginal artists – both at home and internationally.

The exhibit in New York follows her triumph last year at the Wynne Prize, awarded to the best Australian landscape painting or figure sculpture.

"It is very rare to see a solo show in New York City by an Aboriginal artist," says Fred Myers a professor of anthropology and Aboriginal art expert at New York University.

"This is the top of the game," says Paul Sweeney, Manager of Papunya Tula Artists, a collective of artists that includes Napangati.

Sweeney travelled with Napangati to New York last week to attend the opening of the exhibit.

Napangati's work has caught the eye of discerning American art collectors – including two of the most famous celebrities in America.

Rapper Jay-Z and his R&B superstar wife Beyonce recently purchased two of Napangati's paintings to go on display at their home in New York City, The Sydney Morning Herald and The Age understand. 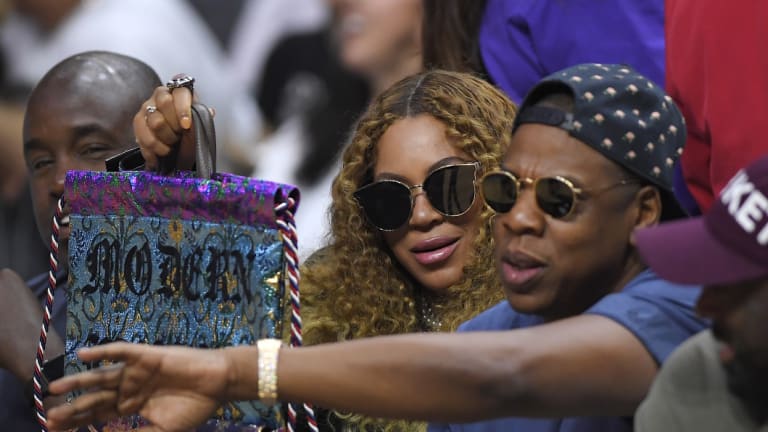 Superstars Beyonce and Jay-Z are art lovers – their collection includes two of the works by Napangati.Credit:AP

Beyonce and Jay-Z are passionate art lovers and regularly attend major art fairs. In 2014 they attended a Halloween Party dressed as Frida Kahlo and Jean-Michel Basquiat and last year filmed a music video in the Louvre.

Salon 94 Bowery partner Alissa Friedman says five of Napangati's 10 works on display at the gallery were sold within days of the exhibit opening.

"Many of our collectors have never seen anything like it before and want to add these pieces to their collection," she says. 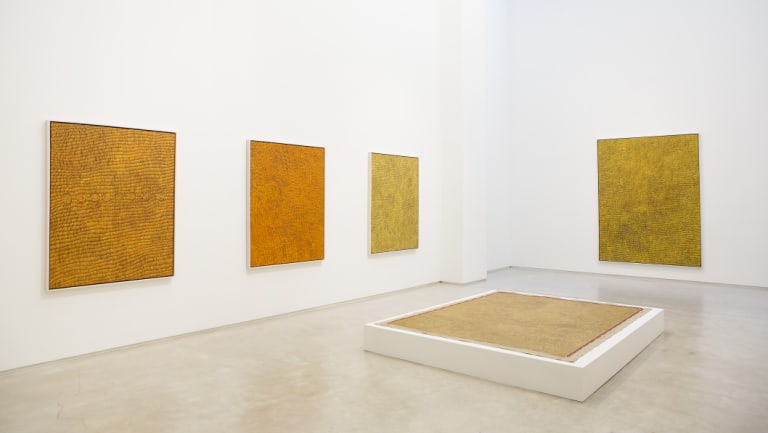 Ten works by artist Yukultji Napangati are on display at the Salon 94 Bowery art gallery in New York City.

Friedman declined to speak about who had purchased the works, citing client confidentiality.

Napangati's exhibit in New York is the second time she has attracted major international attention.

In 1984, when Napangati was aged around 14, she and eight other family members became the last Aboriginal Australians to come into contact with white Australians.

Until then the Pintupi Nine, as the group became known, had led a traditional hunting-and-gathering lifestyle in the desert, with a diet consisting mostly of kangaroo, goanna and bush plants.

They had never experienced modern technology, such as cars or plumbing.

The discovery of the group, also known as the "last nomads", generated a global media sensation.

Napangati, who is aged around 50 and speaks little English, took up painting in 1996. She was following in the footsteps of her brother, Warlimpirrnga Tjapaltjarri, a renowned painter who had his first solo US show in New York at Salon 94 in 2015.

Alissa Friedman says she was told during Tjapaltjarri's exhibit that his sister's paintings were just as spectacular. She flew to Australia to see Napangati's work, and was stunned.

"On a formal level they are very rigorous, well-composed abstract paintings with a strong sense of colour," Friedman says.

"I was instantly drawn to them. And then there was Yukultji's story, which is so compelling." 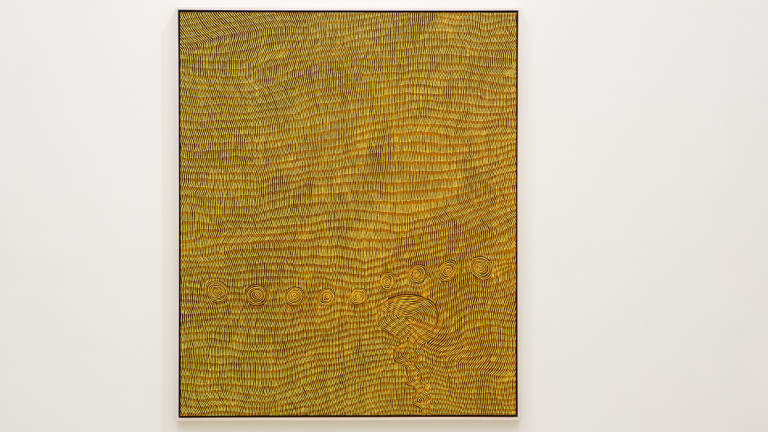 One of the ten artworks by Yukultji Napangati, currently on display in New York City

Like other Pintupi painters, Napangati's works have a contemporary, minimalist aesthetic. They feature intricate, undulating line formations that shimmer and strobe as you look at them.

Her works depict locations associated with her Dreamings such as Marrapinti, a site where ancestral women camped at a rock site and performed ceremonial activities.

Paul Sweeney says simply getting to New York for the exhibit opening was an "epic undertaking". Kiwirrkurra, 1200 kilometres east of Port Headland, is one of the most isolated communities in Australia.

"It is hard to think of anywhere on earth further away from New York," he says.

Their journey began with a five hour flight from Kiwirrkurra to Alice Springs, followed by flights to Melbourne, Los Angeles and New York.

Sweeney says Napangati experienced some culture shock after arriving in New York, a hectic metropolis that contrasts with the slow pace of life in Kiwirrkurra, a community of around 200 people.

Then there was the change in climate – from temperatures of 40 degrees centigrade in the desert to a low of -14 degrees in Manhattan last week.

While in New York, Napangati observed Manhattan's skyscrapers from a helicopter flight and had a personal tour of the Museum of Modern Art (MoMA) with the gallery's curator of Oceanic art.

She is currently in Vancouver, where her paintings are included in a travelling collection of works by contemporary female Aboriginal artists.

Although she is shy and reserved, Sweeney says she knows she has achieved something significant.

"Yukultji has been soaking it up," he says. "Quietly inside, she is very proud."