The Department of Foreign Affairs is assisting the families of two Australian crew members on board a cargo ship that has reportedly capsized off the coast of Japan.

The livestock carrier sent a distress call from the East China Sea at 1:20am on Wednesday morning as heavy rains and winds caused by a typhoon battered the region. The Gulf Livestock 1 was carrying 43 crew members — 39 from the Philippines and two each from Australia and New Zealand.

Reuters reported the 140-metre-long vessel capsized after losing an engine in stormy weather. 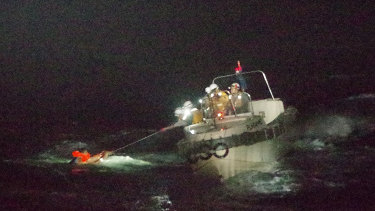 The Japanese Coast Guard said it had rescued one crew member, Sareno Edvarodo, a 45-year-old chief officer from the Philippines.

Edvarodo told the coast guard that when the ship capsized, crew were instructed to put on lifejackets. Reuters reported he jumped into the water and did not see any other crew members before he was rescued.

"The Australian Government is providing consular assistance to the families of two Australian crew members on board a cargo vessel reported missing in Japanese waters," a spokeswoman for the Department of Foreign Affairs said on Thursday. 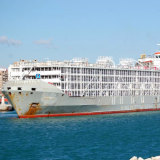 The Gulf Livestock 1 was last detected off the coast of Japan.Credit:Vesselfinder.com

Heavy winds and rain from typhoon Maysak have slowed the rescue operation for the ship, which was transporting 5867 cattle from New Zealand to the Chinese port of Tangshan. The ship is registered in Panama and owned by the Amman-based Rahmeh Compania Naviera.

Typhoon Maysak was heading towards the Korean peninsula with wind speeds of up to 215 kilometres per hour on Wednesday night.

“It is expected that the whole country will be affected by typhoons from the far south of Jeju Island to the day after tomorrow," the Korea Meteorological Administration said on Tuesday.

A second storm, Haishen, with wind speeds equivalent to a category 4 hurricane is expected to hit Japan's Kyushu region by Sunday.