The silliest selfie ever? Drivers shocked as they spot ‘Instagram star’ posing perilously close to the edge of Tower Bridge parapet 30ft above the bank of the Thames as she models her latest outfit

Shocked drivers couldn’t believe their eyes when they saw a woman, who is thought to be a fashion blogger, teetering on the edge of Tower Bridge as she took a selfie.

The stunt saw the Instagram ‘star’ use a self-timed camera to photograph her fashionable look on the famous central London landmark.

She ignored warnings and climbed up onto the side of the bridge to get a perfect shot of her latest outfit – including a denim mini skirt, thigh-high boots and bare legs. 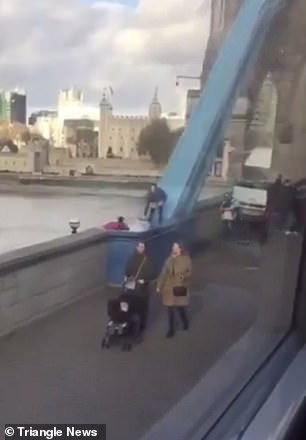 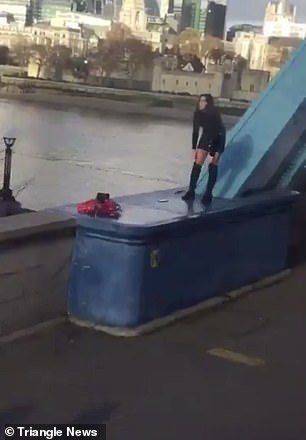 But passers-by were left gasping as she edged precariously towards the edge of the parapet – and a deadly 30ft drop onto the bank of the River Thames.

Two women with a pram walk past the young woman and one of them turns back around to check on the poser, who is flicking her hair for the camera.

The selfie-obsessed fashionista can be seen putting her phone down while pushing her hair back and looking at her camera further down the wall as cars pass.

The dangerous stunt is thought to have happened on December 2 on the southern side of the famous bridge, which attracts hundreds of thousands of tourists every year.

The Royal Society for the Prevention of Accidents (RoSPA) has now warned people not to take life-risking selfies after the video emerged on Twitter earlier this week.

He said: ‘We understand the temptation to take selfies in tourist spots and scenic areas, but a selfie isn’t worth risking your life for.

‘If you’re high up and climbing, especially in windy weather, there is a strong possibility of falling, and at this time of year water will be at significantly low temperatures, so there is a risk of cold water shock.’ 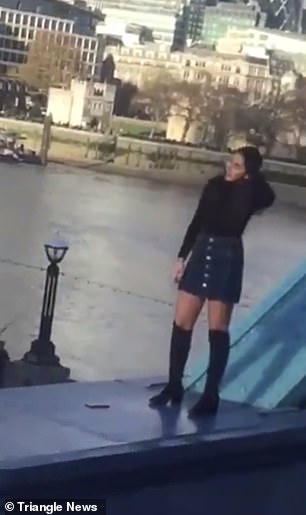 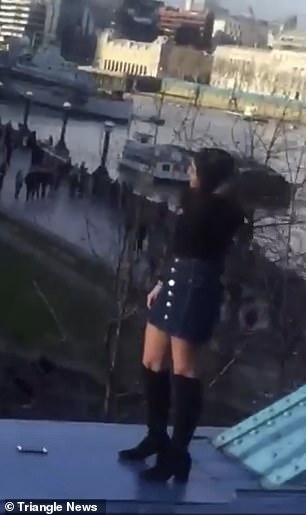 The video was posted on Twitter by an eagle-eyed passenger who said they thought the woman was trying to get an amazing Instagram shot of her outfit.

They Tweeted: ‘The commitment…the danger…the sheer gall… what is your @ please.’

Follower Emma Hope Allwood said: ‘Oh my God, we need to find her an Instagram husband stat. No more of this risky business.’

Hannah Louise said: ‘Omg is she using self timer? This is iconic!’

Katya Coldheart said: ‘I would be worried someone would snatch phone/camera, push me off!’

In October a study revealed more than 250 people have died while snapping photos of themselves in recent years.

The number one cause of death was drowning, followed by incidents involving transport, such as taking a selfie in front of an oncoming train, and also falling from a height.

In July of this year, a British teenager died after falling from the edge of a cliff at a popular whale-watching spot in Australia while taking selfies.

India has the highest number of selfie-related deaths, followed by Russia, United States, and Pakistan, according to the the study by researchers from the All India Institute of Medical Science.