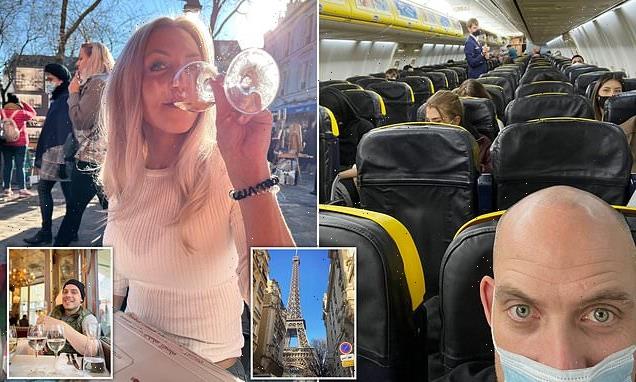 A shocked couple have claimed their travel plans were left in tatters after they were flown more to the wrong country by Ryanair.

Simon Forster and Emma Schofield had planned for a city break in Copenhagen, Denmark, over the festive period but were left bemused when their flight landed in Beauvais, France – more than 750 miles from their intended destination.

The pair were quickly ushered aboard after navigating ‘horrendous’ queues at Manchester Airport during pre-Christmas chaos which caused hundreds of passengers to miss their trips.

Seated alongside the six other passengers on board, Simon and Emma say they went to show their boarding passes to Ryanair staff, but were told ‘not to worry about it’.

It was only once the plane touched down and they were greeted with a cheery ‘Bonjour’ that they realised they had actually landed in the French city of Beauvais.

‘The shock of landing somewhere near Paris when you’re supposed to be going to Copenhagen was ridiculous,’ Simon said.

‘I would like to understand how on earth this happened.’

The couple are seeking an apology from Ryanair and have asked the company to reimburse their flights, hotels and taxis after being forced to fork out more than £930 during their time in Paris.

Ryanair have said that it is each passenger’s individual responsibility to board the correct aircraft and there are multiple ‘touchpoints’ throughout a journey that indicate a flight’s final destination. 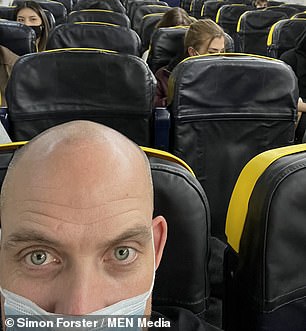 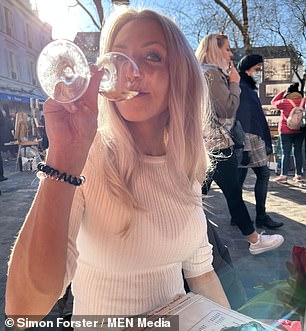 Simon Forster (left) and Emma Schofield had planned for a city break in Copenhagen, Denmark, over the festive period but were left bemused when their flight landed in Paris – more than 750 miles from their intended destination 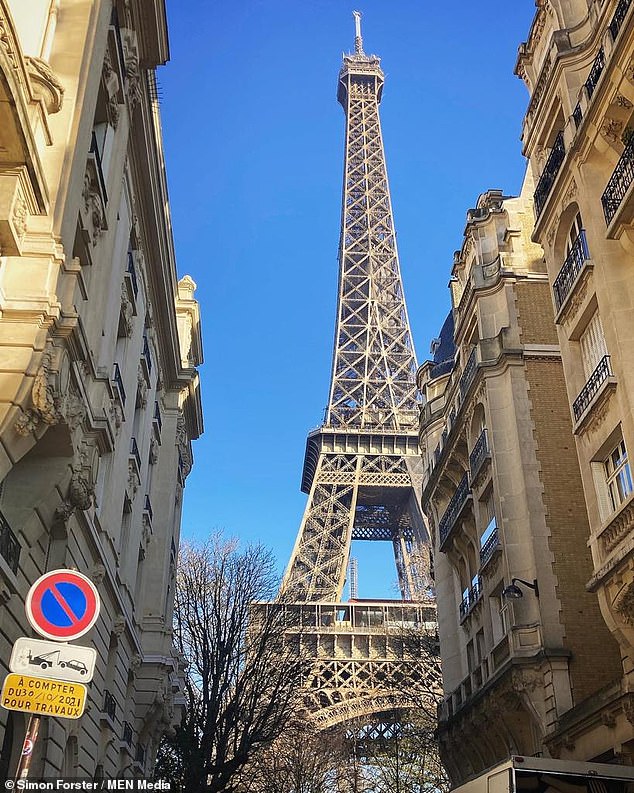 Simon and Emma’s  pre-Christmas adventure started on December 17 last year, when they arrived at Manchester Airport for an evening flight to Copenhagen.

At the time, passengers were left in tears after huge queues meant they were ‘stranded’ and missed out on flights while others were seen fainting during the ordeal.

Airport bosses apologised and said security queues had been ‘longer than we would have hoped’ as a ‘significant increase’ in passenger volumes put the operation under ‘severe pressure’.

Simon, who runs Leeds-based Robot Food, says he waited for more than two hours to pass through security.

‘The queue for security was absolutely enormous and we were all crammed in like cattle,’ he says.

‘It seemed as though we were going to miss our flight,’ he says.

‘As soon as we got there I said “we should have just got a train up to Edinburgh instead”. 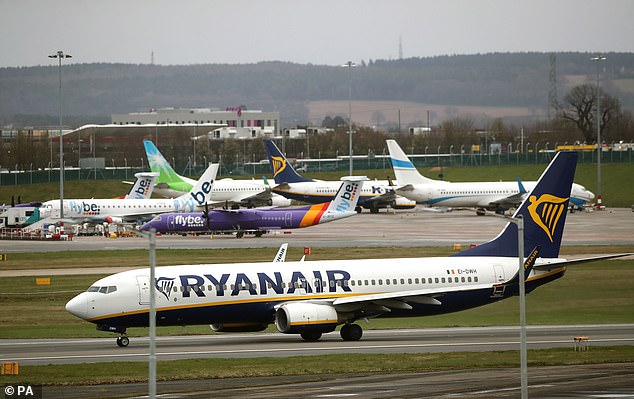 ‘When we got past the shampoo police we got out into the airport and there was a last call for Copenhagen.

‘It was already past the departure time so we just legged it to the gate. We got there and three Ryanair staff asked if we were there for Copenhagen.’

Emma and Simon showed staff their passports and boarding passes and were ushered down some stairs.

‘There was a red plastic link chain directly ahead and to the right, so we turned to the left and to the plane that was there.

‘We got on and there were only about six other passengers, which was not surprising because so many people were missing flights,’ Simon says.

‘I did show the stewardess my boarding pass and she said “oh, don’t worry about it”. I was dripping in sweat.

‘Our seat numbers were free so we sat down. We landed in less time than we expected and as we walked into the airport I thought I didn’t recognise it and I go to Copenhagen quite a lot.

‘We were greeted at passport control with “Bonjour” and it became apparent that we were in France.’ 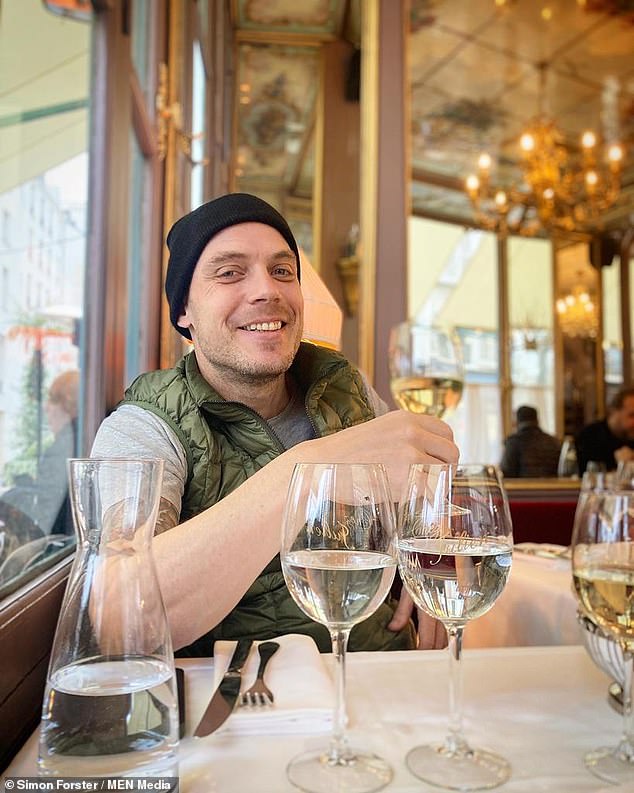 The couple are seeking an apology from Ryanair and have asked the company to reimburse their flights, hotels and taxis after being forced to fork out more than £930 during their time in Paris

Emma and Simon had landed in Beauvais, a city about an hour outside of Paris.

After tracking down a security guard who spoke English, they planned to spend the night in Paris and shared a taxi with a stranger.

‘It was now after 11pm and France wasn’t letting UK travellers in from midnight so we were advised to book a hotel quickly. I had no 4G so one of my colleagues booked us in to a hotel near the Eiffel Tower for the evening,’ Simon explained.

He contacted Ryanair in the morning and asked to be reimbursed for his flights and hotel in Copenhagen and given tickets home. He was told to fill in an online complaint form – which he did on December 21.

The couple stayed in France for the weekend and booked flights home to the UK with Easyjet.

‘We had a lovely weekend and on the way back we kept getting messages from Ryanair about the return Copenhagen flight being delayed.’

Since returning home, Simon has tried to speak to RyanAir several times to complain and to seek reimbursement of his flights and the costs incurred.

He says he spent £926 (€1,108)on the original flights to Copenhagen and a hotel in the Danish city, a taxi from Beauvais, a night in a Paris hotel and return flights from France to the UK.

‘After spending hours calling Ryanair and filling in online forms, my complaint is showing as “solved”,’ he says.

‘I was told on Monday that I would be contacted in three days. Today I called again and someone hung up on me.’

Simon says his colleagues have joked that the scenario was like the plot of the film Home Alone 2: Lost In New York – in which lead character Kevin McCallister ends up separated from his family on a flight to the Big Apple.

‘Just the fact we tried to show our boarding passes and were told “don’t worry about it”, You wouldn’t think that could happen these days.

‘If you put passengers on the wrong plane to the wrong country, you expect an apology.’