The violent scenes, captured last night in Glasgow, show one male employee being punched and repeatedly kicked while lying on the floor, including a stamp to the face. 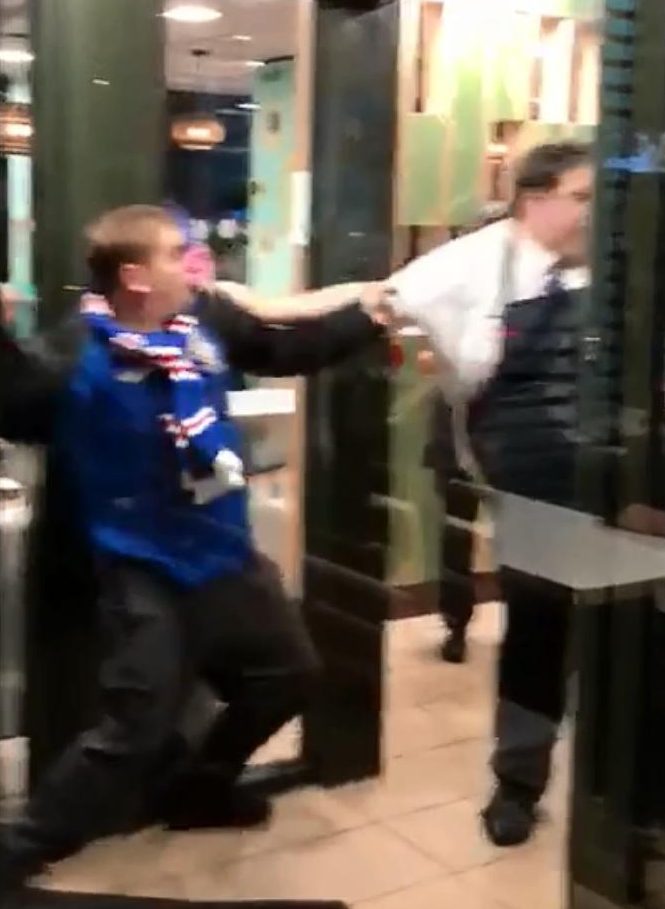 Other members of staff were wrestled to the ground.

The disgraceful attack took place in the fast food restaurant at around 10.30pm on Thursday after Rangers' 1-0 win over FC Ufa in the Europa League.

A shocked onlookers who caught the thugs on camera described it as "madness" and said it was "shocking to see".

He also said the attackers appeared to be celebrating and congratulating each other after leaving.

The footage shows one yob with a Rangers shirt and scarf on raining punches at a male employee and branding him a "big f****** rat." 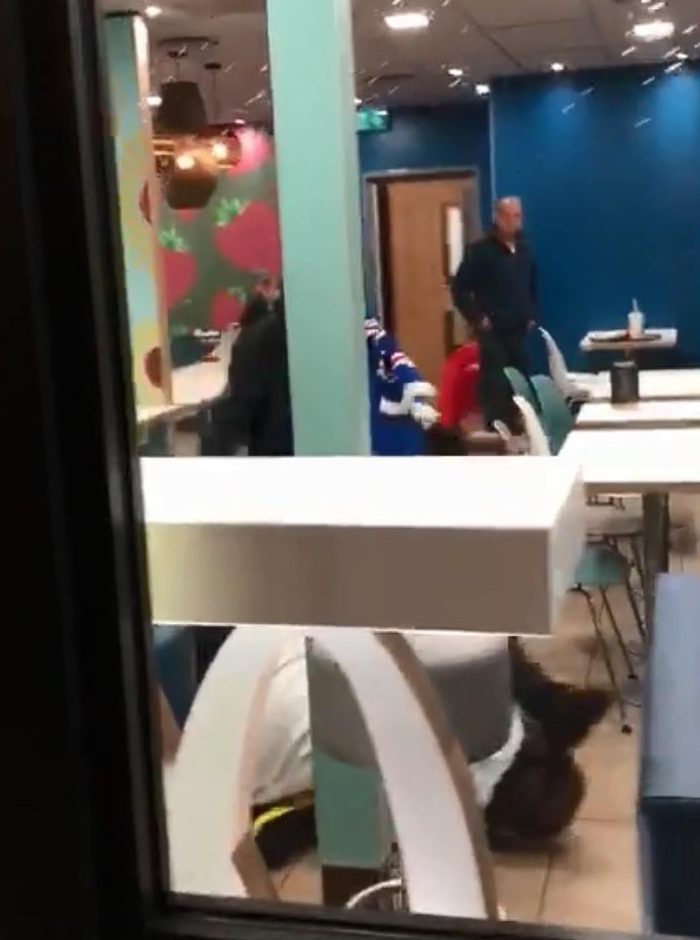 He is pushed outside but then smashes through a glass door to get back in.

He is then seen knocking the man to the floor and booting him in the head.

While this goes on the other brute is seen struggling with other members of staff on the floor. 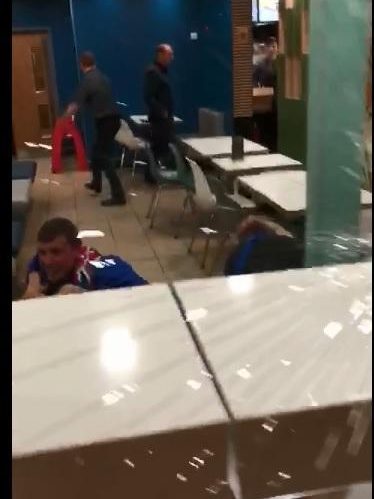 They said: "I was just coming back from a night out and as I was getting there the fire alarm went on and noticed there was a scuffle going on.

"The staff basically tried to push them out and close the electric door but one of them managed to get back in. Then it all kicked off.

"The second guy then started to kick the door in and smashed the glass.

"He started fighting with the big guy from the kitchen and got back in.

"He then started kicking a worker on the floor. There was a woman staff member on the floor as well trying to break it up as well, but I don't think they were attacking her.

"No members of the public were involved, it was a square off between McDonald's staff and these two guys. It went on for about five minutes.

"They eventually left and as they were leaving they were hugging each other and laughing.

"I heard another bang as they walked up the street, so I assume they must have booted a car or something.

"I didn't actually get my cheeseburger after all that. It ruined my night.

"It was absolutely shocking to see."

A spokesperson for McDonald's said: “The safety and wellbeing of our people and customers is our top priority and we have a zero-tolerance approach to behaviour of this nature in our restaurants.

"We will be providing members of our team caught up in last night’s incident with any support they require and would like to acknowledge their professionalism throughout. Police were alerted to this incident and we will be supporting their investigation.”

Police Scotland are aware of the incident and have launched a probe.

A spokeswoman said: "We were called at 22.50 to reports that a male member of staff in a fast food restaurant on Crowe Road was attacked by two men on the premises.

"He sustained injuries but didn't require hospital treatment. Enquiries are ongoing to establish the circumstances."

In July two men were injured after bottle-throwing football fans erupted in a Glasgow street rammy after Rangers' friendly clash against Wigan.

And earlier this month two Croatian Osijek fans were stabbed amid a street brawl before the Europa League qualifier with Rangers.