The sickening footage – filmed in Weston-Super-Mare, near Bristol – shows the woman trying to push the man away during a fight outside a pub. 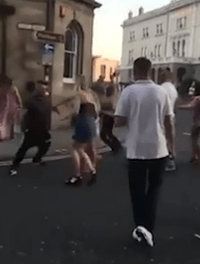 But the meathead immediately knocks her to the floor with a savage left hook.

Three men and a woman were arrested after the mass brawl, with a further two men rushed to hospital.

Staff from the bar can be seen desperately trying to wrestle a chair from the meathead, who drops it before rushing back into the fray. 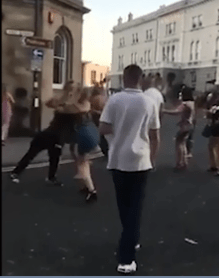 Boozy supporters ran amok in London, after hours of drinking in packed pubs and bars showing the big match and England's 2-0 victory.

Several other people were seen dancing on top of ambulances and smashing taxis as they celebrated the win.

One lout in Clapham Junction was filmed climbing onto the roof of a double-decker before jumping on to a bus stop.