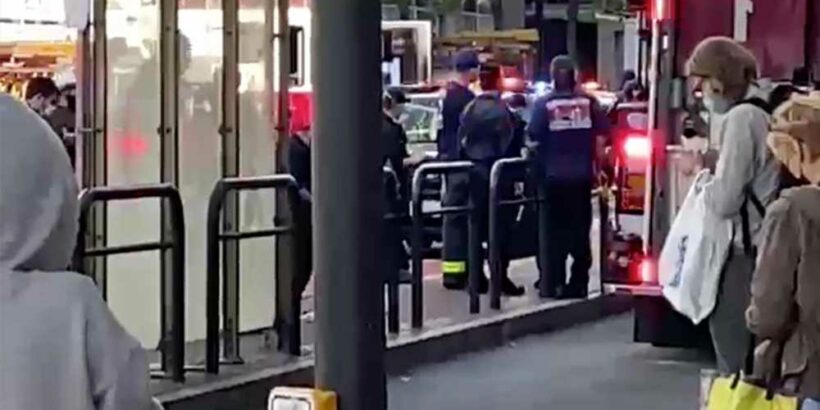 Asian dad walking with toddler in stroller pushed to ground, punched by man

Bodycam footage shows man died after police held him down

Video published on Thursday shows the random stabbing of two elderly Asian women in San Francisco — including one who was attacked so brutally that the blade broke off in her body, according to a local report.

The chilling footage, obtained by KGO-TV, shows the attacker creeping up behind one of the women at a bus stop in the California city, around 7 p.m. on Tuesday.

He then stabs her in the back — before calmly approaching the second victim and knifing her, too.

A bystander rushes over to help and cradles the woman, who had fallen backward onto the ground, according to the shocking clip.

“The assailant walked up to their victim stabbed them and very casually walked away in broad daylight,” witness Jenny Shao told local outlet KPIX.

Another person, who wasn’t named by the outlet, said they saw the attacker holding the blade “really tight like he wanted to do something.”

“And before you know he was behind this lady with a black jacket and you saw all the feathers go flying, so he sliced her, she screamed,” the witness said.

The victims, ages 65 and 85, were treated for their wounds at a local hospital. Their conditions were described as non-life-threatening.

The 85-year-old, a beloved grandmother named Chui Fong, suffered a punctured lung, according to KGO-TV.

The force Thompson allegedly used to stab her was so great, the knife handle broke off and the blade remained in her body until emergency crew were able to take it out, the report said.

An X-ray photo shared by the outlet showed the long serrated knife stuck near her rib cage.

A grandson of Fong’s, Drew, supported the station publishing the video and X-ray image.

“We need to put as much pressure as possible to get this guy prosecuted,” he told the outlet.

A motive for the attack remains unknown.

The violence comes as bias crimes against members of the Asian American community continues to soar across the country.