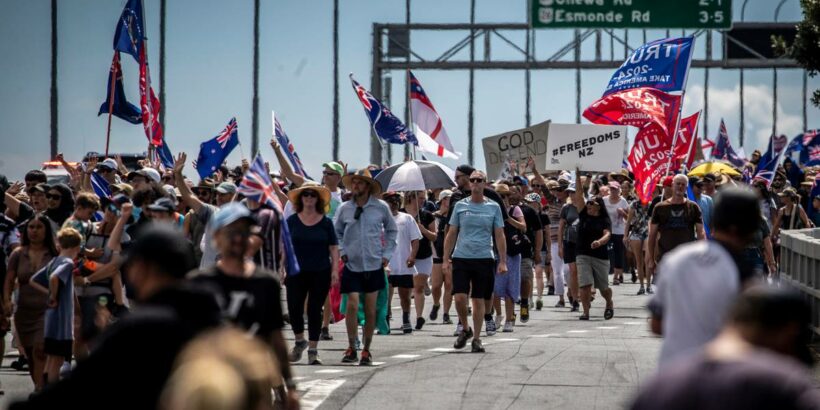 Once upon a time, if I remember rightly, the devil had the best music.

But on Saturday, at the end of Destiny Church’s “anti-mandate” march over the Auckland Harbour Bridge, there it was, blasting over the PA at the rally in Victoria Park: “People killin’, people dyin’, children hurtin’, hear them cryin’, can you practise what you preach and would you turn the other cheek?”

Oh yes, “Where is the love?” by the Black Eyed Peas. Who doesn’t love that song.

Everyone (almost) hates Barry Manilow. Everyone loves calling out hate with a jiggy song. Music, at least, does still unite us.

It was a carnival atmosphere on Saturday. They were pumped at the big turnout: From the Shelly Beach Rd overbridge I counted 2000 as they passed beneath. Pumped also at the way they’d been able to ignore police instructions and just march on to the bridge.

And at the High Court ruling the previous day, that the vax mandate for police and the armed forces was illegal. Speakers at the rally called it “an amazing victory” and they were hungry for more.

The main slogan of the march was “Mandates gone by first of March!” but the word used most often was “freedom”.

“Hands off our freedoms!” said the MC. “We’re tired of our freedoms being taken away.” He said we live under “tyranny” but “democracy will always win”.

Yes, I know, they called for freedom by exercising a remarkable freedom to march over the harbour bridge. They protested tyranny at the very moment 44 million people in Ukraine were experiencing the real meaning of the word. Life is never simple.

The MC called everyone to prayer and said, “We all want peace, protection and prosperity for our children.”

Indeed we do. Music is not the only thing that unites us.

And, as well as music and “Won’t somebody please think of the children!”, you know what else used to unite us?

Mandates. Back in September last year, a high-profile New Zealander proposed a five-point plan for returning us to a relatively normal life. Point 3: “Allow only vaccinated people into licensed premises.”

It was a very popular view: Vaccine mandates would become the mechanism by which responsible citizens were able to engage in ordinary social life again. And the Government made it happen.

As at Parliament, there were different sorts of people on the march. Some had “Trump 2024” flags and some even had Canadian flags, a fair clue to the presence of full-blown conspiracists in their midst.

At least half the crowd, though, seemed aligned to Brian Tāmaki’s Destiny Church and its protest organisation, the Freedom and Rights Coalition. Among the rest, there were many middle-aged, middle-class Pākehā: Not exactly the kind of people you’d expect to give Tāmaki the time of day.

So why do they? And why don’t all the peace-loving Black Eyed Peas fans run the white supremacists out of their movement? That song is a hymn to anti-racism.

My guess: Because it’s a distraction they’re not too fussed about.

They’re not going to waste their time arguing with a lunatic fringe. What good could come of it?

Most of us would probably say those protesters want what we all want, and we would add that we want it just as desperately as they do.

The difference is, the protesters believe the Government, specifically Prime Minister Jacinda Ardern, is what’s stopping them doing those things.

The rest of us are more inclined to blame Covid.

Not the speakers at the rally, though. They spoke of the Government’s “evil agenda”. They said, of the protest at Parliament, that there’s “a war going on down on that lawn right now”. They called for an end to the Government and seemed to believe it should happen, not at the ballot box, but right now. They didn’t say how.

Evil? War? These views were loudly acclaimed by the crowd on Saturday. Why? What happened to peace and love and the Black Eyed Peas?

The next day, the filmmaker Tony Sutorius, who is documenting the protest, told RNZ he thought the label “anti-mandate” was misleading. What really unites the protesters, he said, is that they don’t believe in Covid.

Either it doesn’t exist, or it does exist but it’s not much worse than a cold. Either way, the protesters believe, the response has been vastly disproportionate to the problem.

If you believe that, you’ve probably wondered why governments and health authorities all round the world have told us different. Why are they so desperate to get that vaccine into us and limit the movements of the unvaccinated, even at the risk of great social unrest, violence in the streets and the destruction of parliamentary lawns?

A global conspiracy is the only answer, isn’t it? And to what end? It won’t be a good one.

And you might be a decent, good-hearted person, but those holes were dug by people who believe in white supremacy, armed insurrection and/or the existence of a Satan-worshipping gang of paedophiles which is running the world.

Who’s going to benefit from all this? The conspiracists, to a degree. Act and NZ First may gain some succour too.

But the biggest beneficiary is the National Party. Not because they will become the political voice of the protest: That would be suicide for them. But the protest has made the PM seem vulnerable, for the first time since March 2020, and that almost inevitably helps the main opposition party.

If you ask me, that explains what a lot of those well-heeled Pākehā protesters were doing at the protest on Saturday. Building the movement against Jacinda Ardern.

I’m not saying they shouldn’t. It’s their right. And despite all the cries for freedom, this is a robust democracy full of people protesting their hearts out.

But it would be nice to think all our parliamentary parties were unequivocal in their attitude to information that comes from conspiracists.

As for the bridge protest, is there a difference between Destiny Church marching there, or people on bikes, or a land-rights hikoi, or any other protest?

Nope. Blocking roads is a time-honoured tactic of civil disobedience. You take your chances with public opinion, of course, and if you break the law, you know – or should know – you risk being arrested.

Best for everyone else to grin and bear it, because blocking roads is infinitely preferable to violence. Which, we know, some of the people stoking that peace-loving mob of Covid deniers are very keen on.