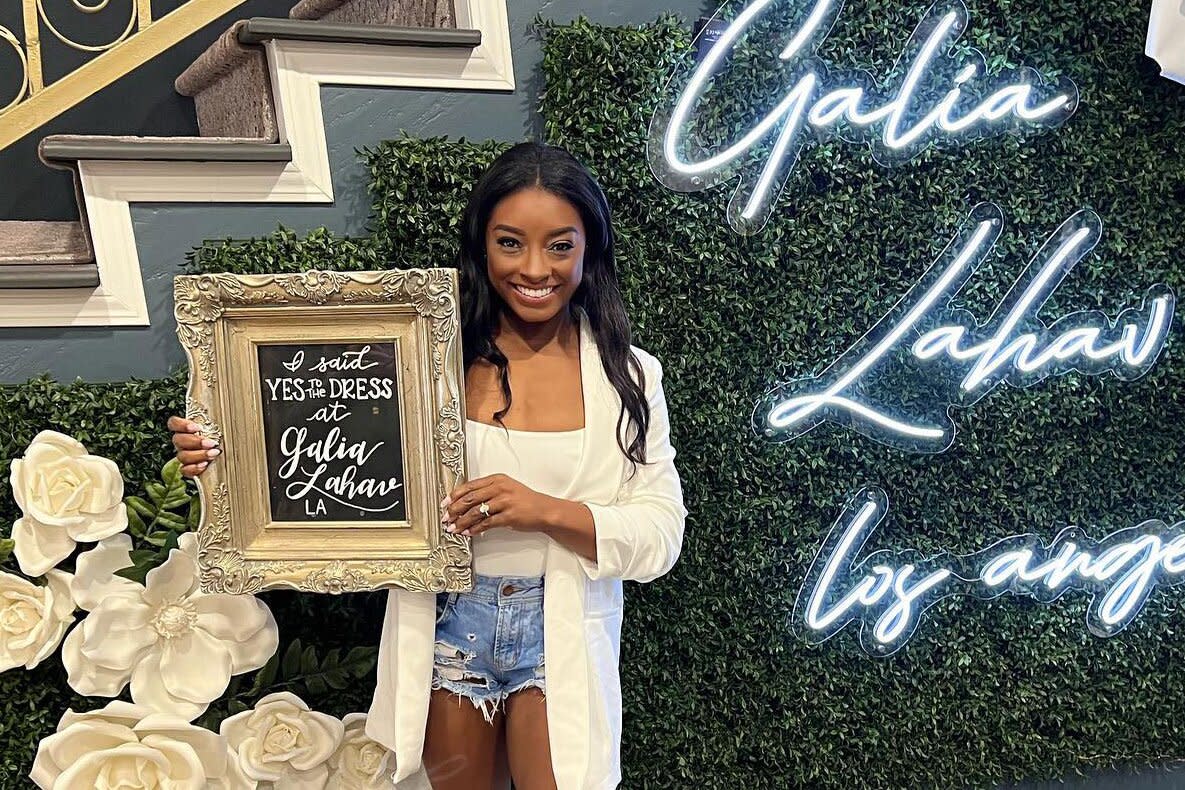 Weeks after announcing her engagement to NFL player Jonathan Owens, Simone Biles has already begun wedding planning. She started with arguably the most exciting part—picking out her wedding dress! During a shopping trip in Los Angeles, California, on Saturday, the Olympic champion landed on not one but two gowns, indicating that she plans to have a big-day wardrobe change. In an Instagram post, the gymnast posed with a sign that read "I said yes to the dress at Galia Lahav LA."

The bridal shop also took to social media to share the exciting news. They posted a photo of Biles in two wedding gowns. One, an embellished number, had cut-outs on the front and sides; the other was a strapless column dress with white embroidery. The shop's team wrote in an Instagram post that they are "over the moon and so honored" that the seven-time Olympic medalist is becoming a "GL bride!" They also noted that the dresses pictured are just a sneak peak of Biles at her fitting and not the actual gowns she chose for her special day.

Biles gave fans the opportunity to ask a bit more about her fitting experience by hosting an "ask me anything" on her Instagram story later than day. During the session, she told one follower that she chose two ensembles. "The first dress I tried on was one of the ones I picked," she wrote, adding that the second option was chosen after seeing about eight others. Peoplereports that Biles also hinted at when the wedding will take place: In a response to one user, she noted that her big day is scheduled for next year, and offered Bora Bora as a possible honeymoon location.

The athlete announced her engagement to Owens on February 15, sharing that it was "the easiest yes," in another Instagram post. "I can't wait to spend forever & ever with you, you're everything I dreamed of and more! let's get married FIANCÉ @jowens_3," she wrote. After nearly two years of dating, Owens popped the question in an outdoor gazebo in Houston, Texas. On his own account, the Houston Texans NFL player shared a slideshow of him asking Biles to marry him, writing that he "woke up this morning with a fiancée."